The mystery of Kim Wilde

For Kim Wilde the Big Job is really starting soon. Because in a few months she will go on tour. "I'm really looking forward to meet my audience soon". Until then we will have to make do with her new LP 'Select'. "A mysterious record", says Kim.

Kim is coming. That is of course big news for all the fans who could have read earlier why it took so long for Kim Wilde to finally play live.
"I only want to play live when I have made two records and have a few hits to my name", said Kim then to Muziek Expres. "We are busy taking things from the ground business-wise and creatively", she says now to Muziek Expres.
Kim has kept her word. But what is the state of affairs? When can we expect her in the Netherlands and will members of her family be in her band?
Kim is ready to answer on the other side of the North Sea. So her goes.
"I'm busy searching for the right musicians. No, I can't tell you who they are yet, because I haven't hired anyone officially yet. There will be some who have played on the record. Ricky has the most important vote because he's my producer after all and my composer. I don't know if he's going to play himself. He's more the type to travel along and do the sound. As you can see things are pretty vague right now, but believe me, it will really happen.
If all goes well, we will play in the Netherlands in the autumn. I will be busy, even busier than I am now."
Why is that?
"I am doing promotion for the single 'View From A Bridge' and a lot of TV performances. I make really long days."
And if Kim Wilde couldn't come, the TV station will play a great promo clip. The one from 'View From A Bridge' looks a lot like the one from 'Cambodia', don't you think?
"There are more parallels. In sound and lyrics, for instance. It's become a bit mysterious. It's grown towards that. My father who writes the lyrics has said that he wanted to make stage plays of each of the songs. Well, he certainly succeeded, because besides 'View From A Bridge' and 'Cambodia' the mysterious atmosphere is also in other songs on the album."
Someone who is myserious has something to hide, hasn't she?
"If you would write everything down it would be boring. It's the same is poetry. I believe a song should make you think, otherwise you'll be bored."
Something really different. There are rumours that you would be in love with Steve Strange?
"It's just that. Rumours. Unfortunately I don't know anything about this myself. You're a bit behind, by the way. Right now, they're saying I'm having an affair with Adam Ant. I'm sorry for a lot of people, but it's not true. I lead my own life and I have no relationship. I'm living at home with my parents, although I'm not there much because of work."
Don't these rumours bug you?
"You get used to them. It's the price you have to pay for being successful. I don't mind. I live in my own little world, with my own friends. Believe me, I'm really happy..." 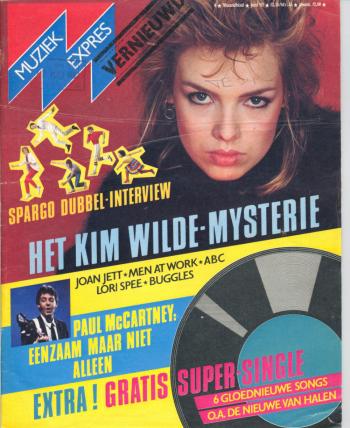 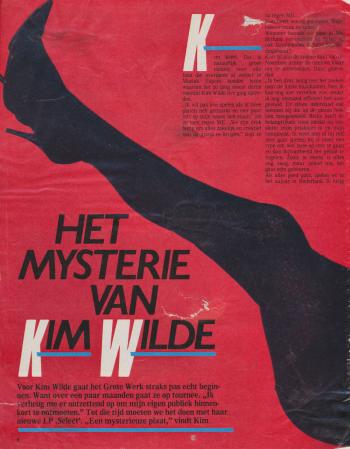 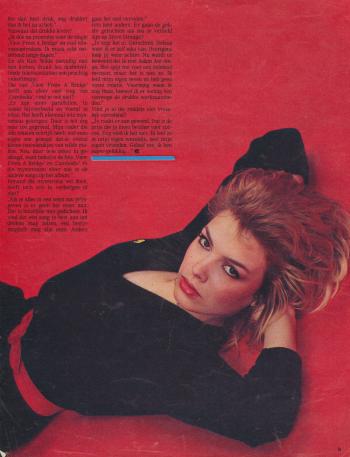