The reader is speaking

'Kim gave us a wonderful evening'

Full of enthusiasm I returned on Saturday night from the Kim Wilde concert, but what did I read that Monday in Max Palfenier's review? Fake? Disappointing? Grey professionalism and so on?
This can't be right! I think Max P.'s own opinion is shining through here all too much. At the very least he's weaving his own opinion into his objective, professional review. It's obvious he doesn't like Kim Wilde, but that's no reason to crush her performance this way.
For instance, he writes about the interest of the audience fading away and the hits having to jack up this disinterest. This is nonsense: the whole hall was very enthusiastic for 90 minutes non stop. I'd also want to know what exactly was real and fake. If this wasn't professional, I will run to that Siouxie and the Banshees concert which he recommends us, to not miss one minute of it, because Kim sang just as good, melodic, pure and clear as when she started with her opening scene, which had much meaning (and I think many agree with me, or is wearing Max P. wearing blinders?)
Also, her concert wasn't received disastrously in England. Max P. must have seen a review with the same 'quality' as his own. Listen to the audience: it gives off the best review!
Max P. thinks he's all that because he wasn't 'fooled' by Kim Wilde's music, like masses of people did. He's so glad that he can see this is not pop music but pop pollution, because he thought her producer was making money out of the refined combination of certain factors. These factors are looks and a nice melody, according to Max this is the formula to mislead the ignorant audience.
He also knows better than 'ignorant' Hilversum with its 'indoctrination'; Max wants to say that Kim Wilde fits into the message Hilversum is giving to people and this is why she is played, but it's not true that Hilversum dictates what we should like. Music simply comes from the Netherlands or into the Netherlands. Hilversum plays it and the people buy what they like to hear. This music, chosen by the people, is played in turn by Hilversum because we chose it. There is no indoctrination.
Max P. can be happy he's seeing through it all. We like this music and we had a great night! I'm sure of this.

After Syp Wynia left, every concertgoer and music lover was hoping for better times, where the reviews were concerned. But alas, even now one seems to drive me to anger. Music in all categories is slashed, for example Mothers Finest (average concert), Daniel Sahuleka (bores easily), Janis Ian (uninteresting and emotionless), Level 42 (no real top group) and now the absolute disgrace: Kim Wilde (banal truism and pop pollution).
I went to this concert, not being a fan and without prejudice. What really happened?
Rational and new version: A nice opening (like Kid Creole, on tape, so what?) then a liveshow that engaged from the beginning to the fabulous end, a singer with a fine voice, a tight and very enthusiastic band and a saxophone player who played the stars out of the sky from time to time. The stage act was a feast for the eyes, combined with a beautiful lightshow.
Dear Kim, your beautiful looks are not connected to your qualities as a performer, and even if you were very ugly, you gave me and probably many others a great night out. Terrific! So don't bother with Max Palfenier, we will have to.

With a lot of surprise I read the review of Kim Wilde's concert by Max Palfenier on November 15. First my opinion about the two albums, which were less interesting than her hits according to him. I think they contain better songs than the singles. Then he writes that her tour was received 'disastrously' in England. I don't know any better than that it was received reasonably well. The saxophone player didn't play bad and the band were not showoffs. The attention didn't have to be jacked up with hits, take for instance the song '2 6 5 8 0' where everyone was singing along and clapping. Seems to be Max Palfenier loves a different kind of music and tries to rubbish Kim Wilde this way, but not rightly.

As a fan of Kim Wilde I want to write in because your review is nonsense. You write about a form of pop pollution that deceives masses of people! I can't fault you for not being a Kim Wilde fan (which can be made up from your report) but that doesn't mean you have to write that other people are deceived. Each to their own, I thought! There are lots of people with a different opinion than you, or didn't you hear the audience at the concert? I guess not.
You should listen to her album 'Select', you will find that the songs on there aren't as colourless as you think. By the way, it's not 'Kids from America', but 'Kids in America'. And she hasn't lost any credit with me, quite the opposite!

There's no accounting for taste, but there is for the quality of what is offered. And I think it was below standard. When in a cloud of towering pretentions cliches are presented musically and visually, suggesting something unique is offered, it reeks of pop pollution. I did see the end of the concert. Didn't Kim Wilde play one of the very few nice songs of the evening, Kids in America? 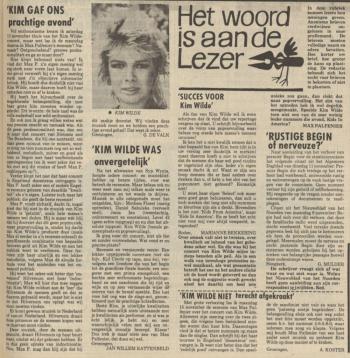