Full of enthusiasm I came home from the Kim Wilde concert on Saturday 13 November, but what did I read the following Monday in Max Palfenier's review? Fake? Disillusioned? gritty professionalism and so on? This is not at all true! I think that Max P. expresses his own opinion very strongly. In any case, he interweaves his own opinion strongly with his objective information / criticism. So obviously he doesn't like Kim Wilde, but that's why he doesn't have to break her performance like that.
For example, he is talking about the fading interest, which had to be boosted with her big hits. This is nonsense: the whole room was wildly enthusiastic for the full hour and a half.
And I would also like to know what exactly was false and counterfeit. If this was not professionalism, then I run her that concert of Siouxsie and The Banshees, which he recommends to not miss a minute of it, because after ten songs she sang just as melodious, melodic, pure and good as when she started with her significant opening scene (and I'm sure many with me think this is it or does Max P. have blinders on?)
Furthermore, it is not true that her concert in England has been disastrous. Max P. has certainly read some English review of the same "quality" as his own. Listen to the audience: it gives the best review!
Max P. thinks he thinks he is not "witnessed" in Kim Wilde's music, as many crowds did. He is only too happy to see that this is not pop music, but pop pollution, because he thought that Kim Wilde's producer knows (as Max wrote in his previous review) the sophisticated combination of certain factors from Kim Wilde and the public. to earn. These factors are her appearance and a nice melody, according to Max the old formula for misleading the ignorant audience.
He certainly knows better than ignorant 'Hilversum with its indoctrination'; Max therefore wants to say that Kim Wilde meets the 'teaching' that Hilversum gives people and that it is therefore played, but it is not that Hilversum imposes on us what we should like. There is just music in the Netherlands or from the Netherlands. Hilversum plays these firsts and people buy what they like about it. Hilversum in turn plays this music, chosen by the people, because we chose that. So there is no question of indoctrination.
Anyway, Max P. may be glad that he sees through this business. We like this music and we had a wonderful evening! I'm sure of that.
Groningen, G. DE VALK

After waving goodbye to Syp Wynia, every concert and music lover hoped for better times, as far as the reviews go. But unfortunately again now I am able to listen again and again to drive me to anger. Music in all categories has to pay, eg: Mothers Finest (mediocre performance), Daniel Sahuleka (bored quickly), Janis lan (ambiguous, uninteresting and emotionless), Level 42 (not a real top group) and now the absolute top: Kim Wilde (banal platitude and pop pollution)
I went to this concert, not as a fan and without prejudice. What exactly took place?
Review and renewed version: A nice uplifting overture (just like for example Kid Creole on tape, well), then a live show that fascinated from the beginning to the grand finale, a singer with a good voice, a very enthusiastic backing band and a saxophonist who occasionally and very surprisingly played the stars of heaven. A delight to the eye was the stage act, combined with the beautiful lighting effects.
Dear Kim, your external qualities have nothing to do with your qualities as a performer, and even if you were really ugly, you have given me and most probably many with me an unforgettable evening. Class! So don't worry about Max Palfenier, we will do it.

As a fan of Kim Wilde I would like to write that I think your report makes no sense. For example, you write about the form of pop pollution, which unfortunately still crowds of people!
I cannot blame you for not being a fan of Kim (this is very noticeable in your report) but that is why you do not have to write that the people who do think she is good have been conned into something. Each to their own, I thought! Because there are a lot of people who think very differently from you, or have you not heard the closing of the pop concert? Apparently not!
You should also listen carefully to her LP 'Select', but you will notice that not all songs are as colorless as you think. Moreover, it is not 'Kids From America', but 'Kids In America'. And she really hasn't lost it for me forever, quite the contrary!

There is no arguing about taste, but certainly about the quality and content of what is on offer. And that was in my opinion at the concert of Kim Wilde below all levels. As if in a cloud of skyrocketing pretensions so musically, if one cliché after another is pulled out of the hat in terms of presentation and then the suggestion is aroused as if it is all about something unique, then it smells of pop pollution. I did experience the end of the performance. Didn't Kim Wilde play one of the very few fun songs that night, Kids In America?

On Monday November 15 I read with great surprise Max Palfenier's review of Kim Wilde's concert. First of all, his opinion about the two albums, which he says were significantly less than her hits. On the other hand, I think there are better songs on it than the singles. Then he writes that her tour in England has been 'disastrous'. I know no better than that it has been received 'fairly well'. Then the saxophonist did not play badly and the musicians weren't "a showy bunch of accompanists". Interest did not fade away so it had to be boosted with hits, e.g. the number 2-6-5-8-0, with which everyone sang and clapped. I think Max Palfenier likes a very different kind of music and tries to attack Kim Wilde for it. 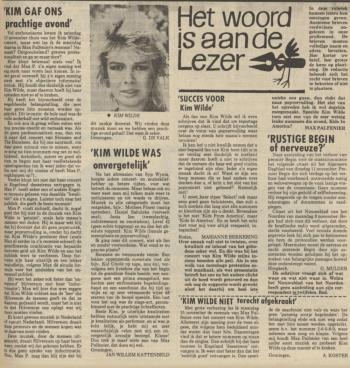 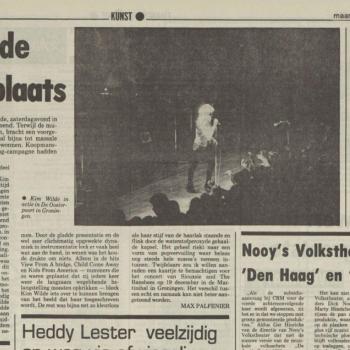 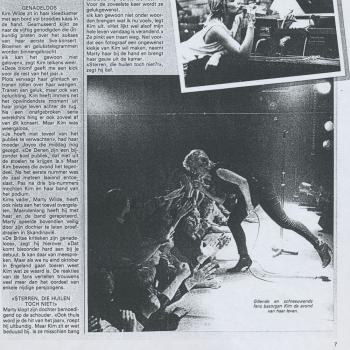 Why was no-one allowed to see the tears of Kim Wilde?