The Wilde and... the innocent

Talk turns to his recent London shows and his career in general and eventually I have no choice but to brag about the legendary undercover interview I conducted with the rock 'n' roll Poet Laureate some 11 months ago.
"Oh!" she exclalms, "you're the one that did that? Ah, you ... you're so lucky you didn't get a punch in the face!"
When I tell her this was exactly what did happen she laughs uproariously before sitting on the edge of her seat to hear the rest the story.
From Elvis the conversation moves on to other national heroes - like Adam. What do you think of him and the way he's presented himself?
"I like him very much. I think he's pure quality entertainment and I like to be entertained. He's very clever and it's nice to feel that someone like him is around. I feel in a similar situation to him, although not as much obviously, because he's a massive star. I can sympathise wltn what he's up to, because I'm in the same game, though doing it slightly differently." You mean having to present yourself in your most marketable way without losing sight of your identity?
"Mmmmm, that's something of which I am painfully aware and the reason why you probably won't see me change very much." But surely you want to develop and move on?
"Yeah, yeah but it will have to be development rather than drastic change. I mean I hope it progresses. I've changed quite a lot since last year. I suppose it depends upon what kind of trousers I buy, it seems to have a lot to do with it!"
Sure. How do you teel about being a sex symbol? Some commentators have described you as another Bardot or Deborah Harry whilst our readers have voted you No 1 sex symbol in the annual poll.
"Have they?" she enquires blankly. "I don't think about it. I read it and laugh."
Isn't there any conscious effort on your part to be an object of sex and glamour?
"Glamour, I love glamour," she replies with a mixture of sneakiness and relief. "But I wish I could be a bit more glamorous. I wish I could be... one of those girls that wear one of those beautiful off-the-shoulder dresses," Kim fantasises, illustrating her desire with a flourish, "but I dunno, I'm not sure about that in public. I might wear an elaborate gown to go out in private, but I'm not sure about in front of the camera."
What, you mean tor like a balI or a party?
"A ball? oh yes!" she mocks, laughing out loud. "Oh yes it is occasionally that I go to the odd ball, get the old frock out." Well, wasn't your 21st birthday party at the end of last year cracked up to be some kind of posh event in a stately home?
"Yes", she concedes, in an uppity tone. "It was a very good party."
It transpires that the reason tor this sudden change in manner is because of the way in which RECORD MIRROR reported the event and the particular column in which it was recorded. Need I add that Kim and Greta Snipe have recently fallen foul of one another? I catalogued the series of disasters the fanciful Greta has caused us; threatened law suits, advertisements pulled out, cancelled interviews... and she laughs hysterically.
"No," she contlnues regaining her good humour, "I don't feel right in full evening dress except when it's tor a specific occasion. I couldn't do it in the public eye cos that's just not my natural dress sense."

So what is? Jeans and a leather jacket?
"Not even leather, actually this thing is plastic!"
How would you describe your look. Rough 'n Ready?
"Rough 'n Ready? I dunno. Yes, I suppose I am, really. Well sometimes I am. These are," she says, pointing to a pair of sensible, no doubt fleece-lined monkey boots, "because they're for a purpose and I like buying things for a purpose. I bought these forthe snow and going ski-ing but at the same time I can wear something terribly purposeless like this belt!
Or go out in a T -shirt and sandals on a freezing cold day. No, not to be different but because they are the only things I can be bothered to find."
And she thinks that giving up smoking has given her this ongoing dose of flu! Do you still make your own clothes? Or don't you have time anymore?
"Well, I do tend to be tied up with vork most of the time. In a few veeks we'll be recording and then it's off to America and Japan for promotional work so it'll be another round of meeting the Press and Radio DJs. The main prerogative this year will be America."
Priority, you mean.
"Priorlty, yeah" she giggles, "but Christ, it's the hardest thlng you know, these promotional tours. Last year I went to God-knows-how-many countries - Australia, South Africa all over the place and didn't see anything except the inside of radio stations. It was like a whole month of getting into the car, driving miles, doing an interview, golng into a record shop, signing maybe 150 autographs, getting back into the car...
Would you have rather gone on the road playing live gigs, or do you reckon that would have been even more exhausting?
"No, it would have been something to get excited about. Live pertorming is something that really excites me a lot and I want to do it and definitely will," Kim decides determinedly.
So why the delay?
"Weil, it's just the way it's worked out for me. I mean some bands get together, get a record deal, make an LP, and tour. With me it's been different. I mean I've often mentioned it to him (again pointing to Mickie's chair) but each time I'm about to insist he's out of the country (doubtless setting up your next promotional tour).
"But this is the xear of doing what I want to do," she says, jokingly thumping the arm of the settee. "I've done enough bloody gallivanting round the world. I think it's time to get this show on the road!"
So on that resolute note, here endeth the Kim Wilde feature. It's heartening to hear her persistence about touring, from the point of view of giving us a chance to see the extent to which she is manipulated by her family and the Most Empire, as weIl as the possibility of actually seeing her live.
Though hardl y coming across as the most witty or stimulating of individuals - as shown by her reluctance to be drawn into the inevitable discussion about her role as a sex symbol - she was nonetheless extremely pleasant to chat to.
Our conversation was more like one between strangers on a train than a formal interview. When her train finally pulls into some station prior to her first ever gig, I'll look forward to congratulatlng her. If only tor having her own way and, er, getting that show on the road. 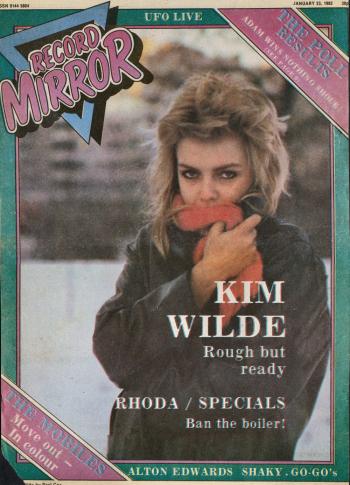 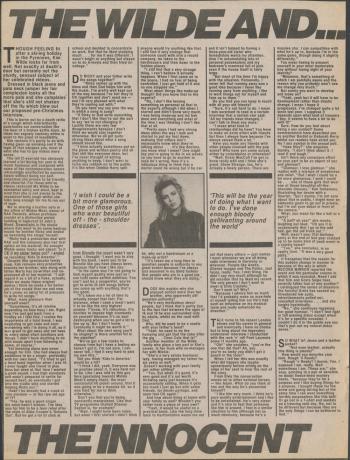 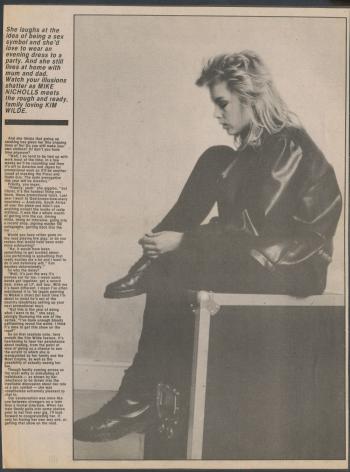