The Wilde Family (1): Kim teased in school because dad was a popstar

It is a strange year for the family Wilde. Superstar daughter Kim, 21, has almost earned her first million pounds. Father Marty writes hits for the first time in twenty years and son Ricky, 20, makes a name for himself as a brilliant producer. Joepie was a guest in the house of Kim's parents in Welwyn Garden City.
We flicked through the family albums with father and mother Wilde and let Kim tell everything about her youth and future dreams. Her surprising, sometimes shocking stories can be found in this exclusive series.

Surrounded by fans in love

When Marty and Joyce married in 1959, he was already a pop idol with a number one hit on his name and she a successful singer with the Vernon Girls. But despite their fame they always remained themselves.
"Joyce and me didn't feel at home in that world of fake gold", Marty tells us. "We were quite introverted and terribly naive in a way. Did you know that we got a wonderful set of antique glasses from the Vernon Girls as a wedding present and we used them to put our toothbrushes in them? It seemed so normal."
"And when we had an important BBC-producer over for dinner, I used prepared meals and hamburgers to feed them", Joyce adds. "The man didn't say a thing, but he must have thought we were the dumbest or the rudest couple in England!"
Marty can laugh about the whole thing now. "Maybe he didn't mind at all. It was just innocent. In the end we got the job for that BBC show and that was what it was all about."
Marty and Joyce have been married for twenty-three years now. Their marriage has known its ups and downs. But Joyce especially thinks back with horror about the period when Marty became the heartbreaker of the charts.
"Marty didn't know how to deal with fans who were in love", Joyce confesses. "And I was scared of him in fact. I was afraid that they would ruin our marriage. Some of those girls demanded Marty for themselves and he didn't know how to defend himself. They seemed like parasites!"
But when the hits disappeared, so did the admirers from his life. "It's a good thing", says Joyce now.

Marty opens up the family album and says not without pride that the four beautiful kids are the blessing of his marriage. Kim is 21, Ricky 20, Roxanne 2 and Marty Jr. 1. "It hasn't always been easy to raise those kids", Joyce tells us. "Sometimes Marty and myself were away from home for months. Then we had to leave Kim and Ricky with our parents. I used to get tears in my eyes whenever I heard that we had to go abroad again. When Marty was offered a tour in Australia for three months, I decided to take the children along with us. I simply couldn't leave them behind again."
"Still, that wasn't easy either", says Marty. "Kim was five and Ricky barely four. We had to drive to the next city at night. It must have been hell for the children."
Kim enters the room, apologetically, mumbling something about an endless photo shoot and sits down on the sofa.
"I have had a happy childhood", she says immediately. "My parents are fantastic, in one word. They have tried to raise me as normally as possible and that's almost impossible in the showbusiness. But as I said, mom and dad have always given their all for their family. I have the best parents anyone could wish for."

But however Marty and Joyce tried their best to give Kim and Ricky a "normal" childhood, their vicinity made it almost impossible. Kim, for instance, refused to say her surname in school, because she was afraid to be laughed at.
"I was ashamed", she confesses now. "I thought the other kids in the class would tease me because my father was a rock star. On top of that I'd already fought with another girl because she asked me what right I had to live in such a big house. I was speechless. After that she punched me in my stomach. I ran home crying and never wanted to go to school again."
Mother Joyce remembers the incident vividly. "Children can be so cruel", she says. "I have never seen Kim so upset as that time. The following days she didn't want to go to school. Marty and I decided to send her to boarding school. It was a tough decision. Kim was barely ten. But it seemed the best for her."
"I was so much happier on that school", Kim says. "Those girls weren't surprised at all when I said Marty Wilde was my father. Their father was a bank president or had some other well-paid job, and that was much more important. I did feel bad that they never talked about music though. I mean, not Rock 'n' roll, the music I liked to listen to. That's what my father played." 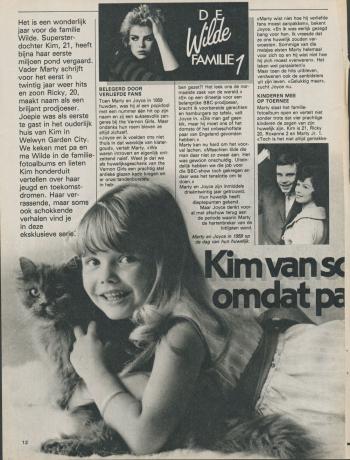 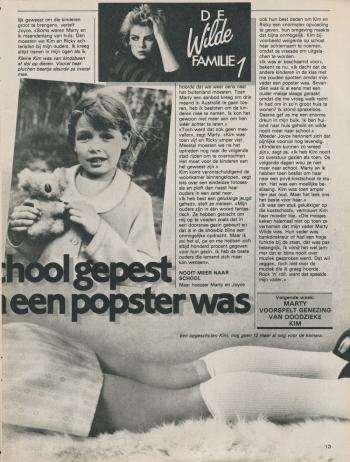