Kim Wilde is one of the most successful female artistes ever. She's loved by everyone and heralded as a star in the same mould as Debbie Harry. We went along to find out what it was like being one of pops most popular ladies and whether she enjoyed it.

"I'm quite happy about what I'm doing but I don't expect everyone to like it - I realise I'm probably not every ones cup of tea!" she told us cheerfully. She does get upset when people write unnecessarily unkind things about her though.

"Some magazine in Australia did a really horrible piece on me - they made me out to be some sort of criminal - since then if an article I'm reading starts to get horrid I put it down because it just hurts me." If you think having a famous Dad has helped Kim think again! Fro mher childhood onwards it seems to have made things much more difficult for her.

"I used to think I could impress people with who my dad is - at one stage of school I had his picture pinned up inside my desk - i the end though I realised that far from impressing people I was turning them against me. I feel kind of sorry for Dad - he takes a lot of knocks. Some people seem to view him as the oldest swinger in town!"

With everyone else in her family being involved in her career, Kim makes sure her mum doesn't get left out! "She's great - she does my accounts and runs my fanclub. Talking of fans I was coming out of Boots the other day when all these kids approached me for my autograph. One of them told me that I was lovely and that she loved my 'Columbia' single - I didn't have the heart to tell her that it was called 'Cambodia'!"

Kim's career has taken on new outlets - she recently filmed an adverts for a bitter lemon drink! "Quite a lot of people in bands do ads for Japan - it's a good way to get your face and name known!" 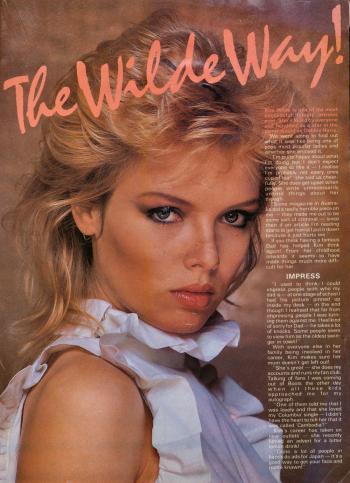