Singer Kim Wilde has become a sensational success in the music world. And it could not have happened to a nicer girl. Typical of Kim she celebrated her 21st birthday by giving her parents a huge surprise party.

Kim's father is Marty Wilde, singing star of the 50s. She made her live debut in Denmark where the usually staid audience went wild about her. "Some of them were even throwing flowers on the stage", she enthused.

She had gone to Denmark to get some experience under her belt before beginning her British tour. It was the sort of sound, professional planning you would expect from a showbiz family. It was actually her father's idea. As it happened it was not really necessary. Kim is a natural. She had the crowd on its feet at the end of the very first number she had ever sung solo in public.

And, besides throwing flowers, the audience were whistling and stamping their foot by the last song. It was music to the ears of Kim. They refused to let her leave the stage until three encores and a further 10 minutes of thunderous applause later.

She said: "When you see all those faces looking up, waving, shouting and it's you making them happy - that's magic. I knew at once my life had changed. Nothing will be quite the same again."

Kim was riding so high she admitted at the time, with tears streaming down her cheeks, that she did not expect to come down for a fortnight. But by the very next day, she was beginning to put her mind seriously to what she could learn from that experience.

Back home in London she said, "Denmark taught me so much about working on stage and how to project myself."

It was a big gamble, stepping out of the relative safety of the recording studio and staking all on the reaction of a live audience.

But it paid off handsomely... with a little bit of help from the family who are also her best friends. The Wilde show is very much a family show. It is mother Joyce, 40, who is manager, brother, Ricky, 20, who produces and writes her songs with father and advisor, Marty, 43.

But was Joyce, once a Vernon girl on the "Oh Boy" television show, who first encouraged Kim's early ambitions. Marty, who had been there a whole generation before his daughter, was against the idea. But only for Kim's sake.

He says, "Female singers are so vulnerable". It was Kim's mother who finally talked round Marty when Kim was offered a recording contract. Joyce says, "I always knew that it was what Kim wanted to do. There was no stopping her."

That first recording offer came in a round about way. Kim was deciding what to do next at the time. She had had a year at art college and enjoyed it, but didn't feel it was leading her anywhere. Nor had either of the two jobs she had tried - sales girl in Harrods, London, and hospital cleaner. So Kim decided to spend the summer giving her mother a hand, and helping her brother on a record he was trying to put together for rock impresario Mickie Most.

Kim's contribution to the record was backing vocals, but as soon as Most heard it, he decided that Kim should sing the song. It was called "Kids in America". The record-buying public went wild about the song and the singer with the shaggy-blonde, home-cut mane and peaches and cream skin. Kim Wilde had become an instant hit.

Her success actually came at just the right time for the family. Kim explains: "Dad was doing cabaret work as he had been for a long time. He was starting to realise he wasn't getting any younger and to worry about how much longer he would be able to keep going. My success, which was his, too, has iven him back his faith in himself and his optimism."

Co-writing and co-producing Kim's hits restored Marty's confidence in the creative powers that made him an idol who had six Top Ten hits of his own in three years, two decades ago.

It was her father, with whom she first sang on stage at Lewisham, London at the age of 13, who unintentionally gave Kim the taste for performing.

She remembers, "I went to an awful lot of gigs with him from Scotland to Cornwall. Sometimes I'd sit in the audience and sometimes backstage. We'd always come home from wherever we were that night. We'd drive through the night sitting in the car listening to music on tapes. I used to love it."

It was her brother who gave her her first taste of recording when she was just 11. She said, "Ricky tried being a singing star when he was 10 and didn't like it, though he had a few hits like 'I Am An Astronaut'. But even then I wanted to be a star. It's funny really, because I used to be in the background singing backing vocals for Ricky. Now I'm the centre of attention and Ricky is in the background. He likes it really, preferring me to be in the limelight."

Success has already enabled Kim to buy a home of her own, a North London flat in need of redecoration. But so far she has spent little time there. She says, "I'm looking forward to doing it up when I get time". Meanwhile, she still prefers to go home to the family home every night. It is a white, rambling, cottage with a thatched roof, situated just outside St. Albans, Herts.

It was a thank-you for the past that inspired Kim's 21st birthday celebration. She said, "I wanted something really out of the ordinary. It was at Knebworth Hall, which is very stately. There were 300 guests and three bands and it was a surprise for Mum and Dad. I told them it was just going to be a small party with a handful of close friends. You should have seen their faces. They were stunned. I was glad because I felt I owed them so much. They've done a lot for me and I wanted to do something for them in return."

Kim, who never goes to showbiz parties - "No one asks me, and I wouldn't know anyone at them if I did" - is concerned to keep plenty of time in her life for family and friends. It is important to Kim, who buys most of her clothes from Oxfam shops, that she keeps her friends from her pre-fame days.

Not all her schoolmates actually became friends, though. Some were nasty to her because of her father's success. "Often I wished Dad had a normal job and Mum was home baking pies", said Kim. "I was the victim of a lot of envy at school, but it did toughen me up. And my parents were very good at explaining why some people were like that and that I had to forgive them."

Kim was to find having a famous family name was also a drawback, when she first moved into the music business. She had to prove herself - then prove herself again that she was not just exploiting her father's name.

She says, "I feel people at first judged me harder." She also likes to keep fit by running four miles a day. It helps to keep on top of her gruelling workload. She makes no secret of the fact tat she is extremely ambitious, though not, she hastily adds, ruthless.

"I get lots of fan mail - dozens of letters every day. And people send paintings and drawings. Even marriage proposals. I keep a scrap book of my career. My very first letter from a fan is in there. And some write regularly. We encourage them to send in photographs of themselves. I have a huge board on the wall of the fan club office with a collage on it of all the photos I've been sent."

One drawback of success is that she has just not had time for a regular boyfriend. She jokes, "When anyone asks me about my love life I tell them it is non-existent."

Kim hopes the next stop on the roller-coaster ride to superstardom will be acting. But she is a long way from finishing with music. She wants to try writing her own songs when she gets time.

She says, "I don't want to be one of these artistes who is just here today and gone tomorrow. I just love performing." 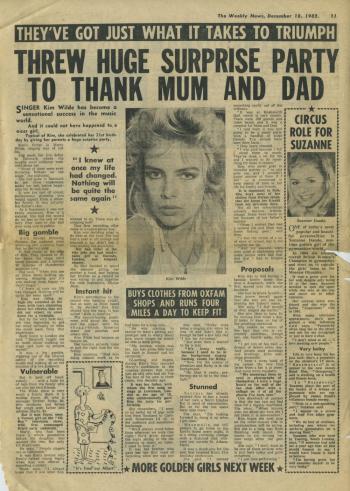