Visiting the birthplace of Kim Wilde

I was never of such latitude to embark on a whim, responding to exotic instincts, driven recklessly. I knew by hearsay, and especially for myself, that Kim Wilde mézigue have already adored by reason of my reason. It has now been done, because no sooner said than done: the world was turning I had already crossed the Channel. Catching Wildesville.

'I will give my pile of singles of Yvette Horner a sunny day in London,' I said one day in an urgent and passionate discussion. I did not have to bother me. This day was shining brightly. Kim also shone, too. It was there, sitting nonchalantly on a corner of the hall, absorbed by a strictly professional telephone conversation, when I crossed the small white market to her record company building. White lacquered doors, columns, dark. I am offered tea. Through the door ajar, I see the dark silhouette and graceful, lost in a technical explanation on a record sleeve: Johnson's tight black pants zips closed at the bottom, arched bottilos adorned with a necklace of nails, shirt-jacket and black maroon, bright geometric small suitcase in hand.

Kim is the guide through the house of RAK: again, entering the recording studio. Amazement and wonder of storytelling: carefully aligned, guitars and basses from the Cure radiate in a corner. On a desk, a text on their left, nicely entitled 'Pornography', bodes well for their next production. It was in these studios that Kim just mixed the tracks she recorded with her family. 'In your room?' I asked. 'No, no, in the entrance hall'. It should be noted in passing that the five (5) crates of beer cans and bottles of vodka empty rows at the foot of the mixer have been absorbed by The Cure, not Kim, who prefers rose wine. On the floor above, various burlingues various shambles. Here, other funds, not full of empty liquor flasks, but cassettes from potential stars who have sent through a major newspaper in their works of art directors ARK. The photos attached, by the way, are worth their weight in peanuts. Nothing, or almost, we have not been spared: the boss's office, the plays of models, a signed photograph of Elvis Costello, one of gold records (who was he, burlingue, already?), the fan club that anyone who opens the door without warning finds himself buried under four hundred ninety-two thousand six hundred and five love letters addressed to Kim. Several secretaries have already been well placed on the tile. Moderate your passions if you do not want lives on your conscience, I say.

Camden Town, London rock mecca, is not far away. This is where Madness, among others, have grown. This is where sis the Dingwall's, this old club, and that was the Electric Ballroom, which has seen him develop the wave ska and fights between skinheads and Rudies. Graying neighborhood par excellence, with metal bridge over railway, blackened brick embellished with graffiti, freezing fog, flea market. Today, not. It's nice. Beautiful! It is market day: vegetables, fruit, chips, everything! Oranges, apples, pears, market four seasons kaleidoscopic. Kim leads, I watch his eyes in the oceanic retro yum-yum, I plug the radio. 'And at that time it, you do not really remember what you did? No, not really. Ah! There was always the same air radio ... 'Say Hello, Wave Goodbye' by Soft Cell. Kim whispers the lyrics ... This speaks of flamingos, it runs pleasantly, I purr ... Passing along the parks on the way to Camden Town, Kim brakes, turned around, stops, points to a cantilever 'This is it! This is where I want to live! That's the London of Mary Poppins. " The serenity, the greenery, gulls, pink flamingos: I see.
The odds of smoking London, is that a street corner, in fact, we go from London to Mary Poppins to that of Sid Vicious. But today even the London of Sid Vicious shines even he could fly with nothing but an umbrella of nothing.

Kim crunches a green apple in a sunbeam, but no snake bites her breast. On the instigation of Mr. Wolf, who did not miss one to capture the beautiful, I put the bag in front of a merry cobbler pakistinais. A platform-boot-color non-standard is out of the stall, placed on the sidewalk despite the reluctance of the sheet metal worker, and photographed while Kim cons. Further a bobby is arrested, asked to pose in the company of 'Miss Wilde'. The brave one does not really know if it's bacon or pork, just procrastinating, and then accepts, flattered. He is dangled an autograph, he gets, gets a smile that melts like an icicle in Harrar. Farewell, Bob!

Strolling along the asphalt briquette ocher walls, surrounded by black cabs, buses red double-decker red letter boxes, Bobbi and all the other wonders English conceivable, Kim discovers a sudden hunger. Stopping in a corner on the cob, she advises a diverse shop: The Media and antiques, in an unspeakable mess, are sold off. She hesitates between a blouse with a book and a garbage collector at 90 pence, opts for the decat blouse and just psychedelic, consult the press and pushing a "ugh!" resounding. Leaning on his shoulder, I see him pictured with Hazel O'Connor. I argue that the peels of the charts in 'Sounds' will not make us fart buttons cardigan, her statement endorsed by an invitation to a great lord, floating Chinese restaurant. " Be careful!

Once rassassinés, went to throw peanuts to flamingos at the zoo in Regent's Park with a thought for Soft Cell. On the way back plane. A jumper from the RHA, Royal Horse Army, trotting gaily to his barracks, agrees to comply with the wishes of our photographer, went berserk, Kim strafing into the sunset.

The next day, panicked phone calls to the editor. The RHA, commotion of battle, had gone up the chain. 'Strictly forbidden to publish pictures of Gunner 34,723 in your magazine, on pain of prosecution'. Patience, Gunner 34723, you will still receive your photograph with Kim. In fact, Kim has just recorded a new single titled 'View from a bridge'. The album follows. 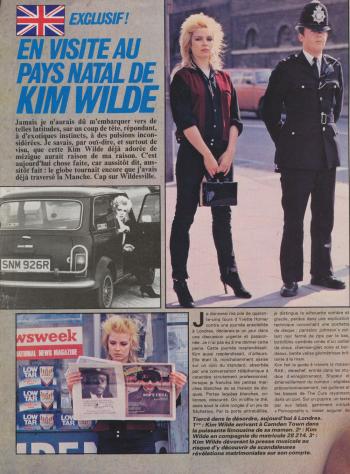 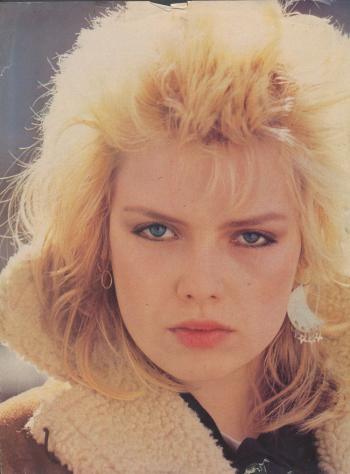 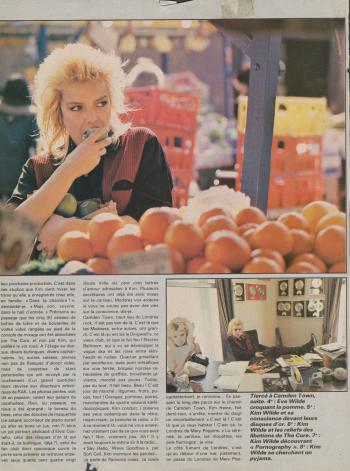 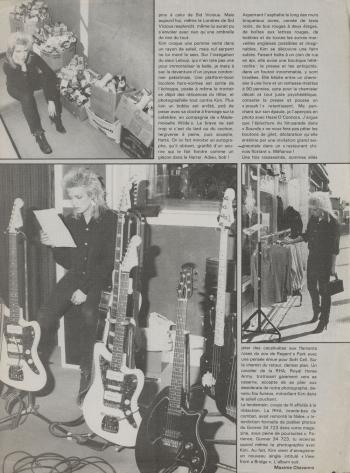