Who turns Kim around?

When Kim woke up a few days ago, she realised she'd dreamt about Adam Ant in his role as Sir Lancelot. Almost at the same time Adam Ant talked out in the open aout his admiration for Kim and that he would like to get to know her personally.
"I think Kim is not just a good singer, but also very expressive and dutiful. And she is also very beautiful", he said to a reporter of an English newspaper. On her 21st birthday Kim received a big bunch of roses from Adam...
Since a few weeks Kim works in the studio on her new LP and the single "A view from the bridge", that will be released soon. Adam was also working in the studio. Both have very little time left for their private lives. But Kim was interested in meeting Adam: she thinks he's interesting and expressive.
Mickie Most, Kim's record boss, who usually seals himself off from the outside world, says: "For Kim it would be good to go out with someone like Adam. It can only be useful for her."
But the stars with whom she's been seen haven't been so useful for her, for instance Steve Strange and Bob Kingston from Tenpole Tudor. Kim: "Steve is a good friend, nothing more."
And Bob Kingston? "We - I mean, my brother and me - met Tenpole Tudor during Musikladen in Bremen behind the scenes and we had a lot of fun together. Later Bob called me, and invited me to dinner. We went to concerts together - that's all."
Kim hasn't met the right man yet. Or is she undecided for whom she would like to give up her single life? It's obvious that it will be exciting when Kim and Adam meet. Both are Scorpio's after all... 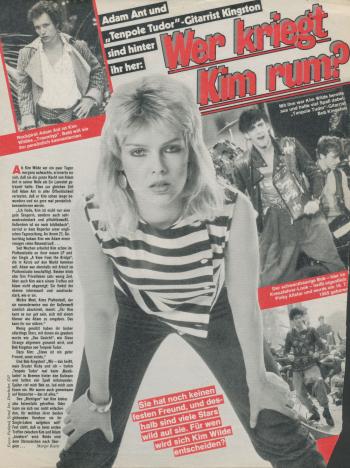