At just 21 years of age, with a single album and some singles to her credit and without ever performing live, Kim Wilde is one of the emerging personalities of musical Europe.
The album, which bears his name, sold one million copies, and together with the two singles "Kids in America" ​​and "Checkered love" (3 million copies) he climbed the North and Mid-European charts.
Kim is the daughter of art: her father, Marty Wilde, rock 'n' roll man of the 60s, composes the songs which are then produced and played by Richie Wilde, Kim's brother. The result is a calibrated and commercial rock, which still draws its lifeblood from Kim's voice and presence.
The most immediate comparisons, the ones that are abused every time a woman starts singing, are the two overseas greats: Deborah Harris of Blondie and Chrissie Hynde of Pretenders. From an aesthetic point of view Kim Wilde realizes the comparison and indeed has the credentials for vincerio: he is in fact 15 years less and 15 centimeters more than Harris and a sweeter and kinder face than Hynde. Then there is the substantial difference that Kim has no group behind her, she has practically no public image to support but her own, with all the advantages and disadvantages that this entails. Live confirmation is missing, and this is no small gap. The artificial stars, packed on the 36 tracks of an engraving room and in front of the television studios, are subject to sensational downsizing on the stage.
Kim recently moved from Milan to present her latest single, entitled "Cambodia", a story - indeed not particularly original - of a love not really with a happy ending, however pleasant and well arranged album. In black leather outfit, evidently tried by travel, and despite a strong cold that made her almost completely soundless, Kim lent herself very kindly to the ritual from the microphones and flashes (on the other hand, they are the rules of that game of which wants to be a protagonist). We have not missed the opportunity to ask you some questions:

Why such a frenetic pace of recordings?
Because I have a lot of promised material and, then ... a little because of them (points to a record company employee).

Who do you think influenced your music?
My family has been very important; I listen to a little bit of everything, but I feel that Brian Eno, Ferry and a whole series of rock complexes have influenced me a lot. However I don't imitate anyone, I feel autonomous. I also like Chrissie Hynde a lot, but it's really a different thing. In any case, there is room for everyone in England.

What do you think of the New Dandy strand?
I do not judge by veins, by genres, neither the New Dandy nor any other musical current. I like individual artists, not genres.

Your future plans?
I am recording a new album with 8 unreleased tracks, then I will take a holiday in Spain, I need it.

Is Dad happy with you?
Yes, a lot, considering also that the writer of the songs is really him.

Will you come to Italy to play?
I really hope so, I'd really like to.

There is no lack of sympathy and beauty, not even determination; the dangers it can face are substantially two: on the one hand becoming a sort of sex symbol, a European Blondie, and therefore losing all musical identity; on the other, losing control of its business and becoming a great record and family business tool.

However, she seems very determined and ambitious, and certainly knows where she wants to go; in the telegram sent to the record company to announce the press conference he writes among other things: "Wish me luck, because I want to break through on the Italian market".
Good luck. 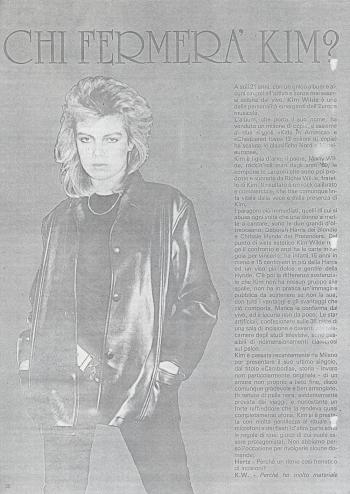 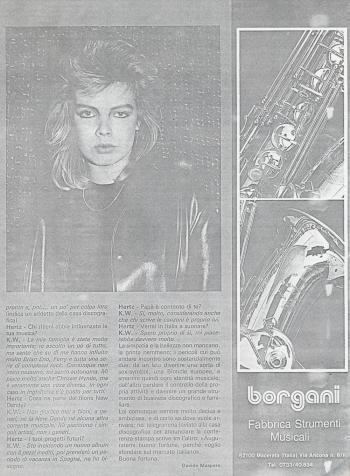