Why Kim isn't kicking over the traces...

Kim Wilde was wearing the torn white vest she appropriated from a friend years ago, green cotton trousers and brown suede shoes she bought in an Oxfam shop last week for £4.

Three years ago she went into a hairdressers' with a picture of Linda McCartney and said, 'I want to look like this'. Today she cuts and dyes her hair herself, buys most of her clothes from Oxfam or second-hand market stalls and, at the age of 21, looks a bit like a rather hard up, punk Cindy doll. In truth, of course, she is rapidly becoming very, very rich but is determined not to show it. She's bought a shabby old 1920s flat and a modest car, because she couldn't bear anybody to think she'd 'got flash'.

She combines working class, hardworking thrift and a dislike for anything showy, with middle class gloss, which is scarcely surprising because her background encompasses both. Her father is singer Marty Wilde, her mother was Joyce Baker of the singing Vernons girls, her paternal grandad was a bus driver and her mother's father was a Liverpool Corporation building forman.

She grew up in middle-class affluence in the Hertfordshire countryside in a five-bedroomed thatched house, which used to belong to Prince Bernhard of the Netherlands. Since her first record, Kids In America, became a mammoth hit nearly two years ago, she's been eulogised for her animal magnetism, her resemblance to a young Bardot, her magnolia-like skin and the fact that her best friend is still her old schoolchum Clare Smith, who is now an occupational therapist. She has a grown-up brother Ricky, a three-year-old sister called Roxanne, a baby brother Marty and, despite the new flat, still goes home every night to Hertfordshire.

'The house is half-filled with antiques and half with new stuff because my Dad has a craving for anything modern. You couldn't say it was thought out, it's just a very lived-in place, with the kids' toys everywhere. I don't know how we ever managed without Roxanne and Marty. They cheer you up, you go home, immerse yourself in them instead of thinking about yourself. If ever my family did say I was getting above myself, I'd always listen. I'd take a lot of notice, examine myself again. That kind of remark would really hurt me. It's all plain speaking in my family. There's no circling round the subject stuff, my mother is incredibly down to earth.
'I'm not scared of a bit of work. I used to help Mum with the housework, I worked in the greenhouse down the road as a Saturday job, my friend and I used to clean at the hospital. I cleaned my piano teacher's house for a while, that was my first job. We moved to the country when I was eight years old. Before that we were London kids living in an area where there weren't trees or bushes and then we moved to a place full of nature.
'It was by going to the country that we became a unit for the first time. Before that we'd been split up. I was in boarding school in Dulwich when I was seven. My mother toured with my father and we had a series of different women looking after us, strange autie-type figures. It's better to have your Mum and I always wanted her, but I knew I was loved. I was never insecure about that. My mother married young, had kids young, it wasn't easy for her to leave us, we all suffered.'

Convinced in her heart that she wanted to be a solo singer, Kim kept it to herself, knowing that her father wanted her to get a good education. At school she was known by the real family name of Smith and sang in Verdi's Requiem in the choir.

'I loved being called Smith. It's such a British name. I was dead proud of it because it was my grandad's name and he was a pretty good man. He came from a long line of terrific people.'

When she was 13 she sang with her father on stage for the first time in Lewisham, and later during her school holidays she toured the country with him.

'I know Dad's act inside out, down to every move he makes. I went to an awful lot of gigs with him, to Cornwall, to Scotland, to working men's clubs in the North. Sometimes I'd sit in the audience, sometimes I'd be backstage. Being a girl in a working men's club it's best to keep out of the way. We'd always come home from wherever we were. We'd drive through the night sitting in the car listening to music on tapes and stopping off at the old motorway cafes. I used to love it.
'Discipline from my Dad was never overpowering. Rather than saying 'You can't do that', he'd prey on your conscience. You knew damn well what he wouldn't like you to do and because of that, I never rebelled in a drastic way. I was always the judge and jury for myself. If I was running away from anything, it was me.
'Mum gave up her career for Dad and she's never been sorry. If I'd been a Vernon girl, on telly every week in a great show, I'd have regretted it. But she fell in love and I suppose that's the most important thing.
'I'm frightened of getting caught, trapped. I'm not really involved in men at all. It was a decision I made a little while ago.'

She made that decision because work has always come first. She's a mixture of self-assurance, and diffidence, of maturity and childishness.

'My confidence', she says, 'will suddenly leave me for a few days. I think most kids are born confident and then as they grow older it's knocked out of them. Bit by bit it gets chipped away. At the end of the day it's the strong who survive. I didn't for a minute think all this was going to happen. I was just determined to get in, by hook or by crook, but I'm not ruthless. Being ruthless is being able to tread on people's toes and not care, and I can't do that.'

After A-levels she went to art college and spent her summer holidays looking after Roxanne and singing on some tracks her brother RIcky was preparing. She said: 'I thought I just might get my nose in.'

When Mickie Most heard her rendering of Kids In America, he said, 'That's a hit record, I'm going to produce it.' Today Kim is surrounded by all the paraphernalia of the pop world: the flunkies, the slightly nutty fans, the claustrophobia and the ever-increasing danger of alienation from reality and true friends.

'The only thing that frightens me is losing the reason why I came into the business in the first place. There are so many distractions, in success, in money, but as long as I don't lose sight of the fact that I'm here only because I want to sing, because I love performing, I'll be all right. My friends are still the people I've known for years. A lot of them are still at college, one of them is a groces, some work in shops. We go on holiday together, or to pubs, and I hope it won't change. I'll always have time for them if they'll have time for me.' 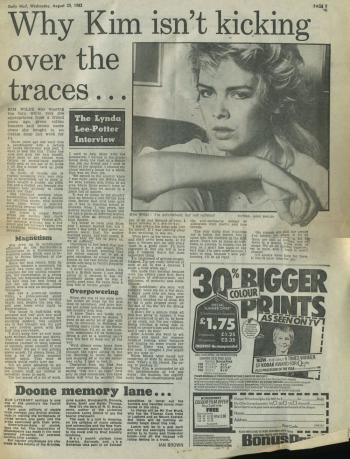 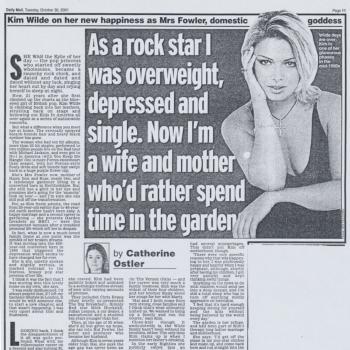