Why Kim wants to go and face her fans

Kim Wilde, daughter of a one-time rock prnice, has had a fairy-tale ride in rock. Robbie Brechin called her at the family office near London.

Kim Wilde, so sultry and cool and self-assured on her carefully constructed video clips, admitted she had doubts. After conquering the charts around the wold with 'Kids in America', and chasing that dream debut with the haunting 'Cambodia', she has to face the fact that she has not been tested in front of a paying audience.

The ability to handle it may be in her genes, anyway. Her father, Marty was wowing the crowds with his performances of hits suc has 'Teenager in love' back in the early '60s. 'I don't feel it all the time, but I have bouts of being nervous', Wilde, in grey jogging shorts, white T-shirt and trainer shoes, said from Knebworth, a village outside London. 'You have to spend so much time organising. Sometimes I feel fine other times I think I'll have a nervous breakdown. But I'm very confident about it mostly, otherwise I wouldn't try it.'

She may play keyboards on her first tour - of the UK in October - but is not anxious to get too caught up in the instrumentation. 'I think the audience wants to see as much of me as they can'. Wilde wants to take her road show to all the countries where her records have taken off 'and that's an awful lot.'

Fame, she claims, has not made her big-headed. But it has exposed her to the mysterious, wonderful world of show-business gossip and derange rumours. An Adelaide radio report alleged Rolling Stone Mick Jagger had made a pass at 21-year-old Wilde in a London nightclub disco recently. The story went that Wilde rejected the balletic but middle-aged vocalist, pointing to her three musicmen sitting at a nearby table.

'No, that's not true', she said, almost breaking into a giggle. 'One, I don't go to nightclubs, two, I don't have any bodyguards, and three, I've never met Jagger.' So, just say His Satanic Majesty did make a request? 'I'd have a look in my diary to see if I was busy or not.' Sure, romance has failed her 'once or twice', but 'I'm not broken-hearted now.'

True, her ambition to have dinner with Elvis Costello has yet to be realised. 'I don't really have a crush on him', she said, giggling this time. 'I just think he's a mammoth talent, I admire him very much.' Oe of the hardest parts has always been the way others saw her as the child of a famous pop star, living in splendid isolation above the ordinary folk. 'It's not easy to try to be like everybody else', Wilde started. 'It takes a lot of time to come to terms with who you are, to cope with being a star's daughter, perhaps living in a bigger house than your best friend.'

She will never forget how one small boy stood up in class at school and asked her to explain, in front of everybody, how she had the right to live in a beautiful house outside the village when he had to live in a smaller one inside the village. 'It was very confusing for a 10-year-old', Wilde said. She still lives at home with her mother, Joyce, who manages her, 'gets me to the dentist on time', and her father, who writes her material with producer-brother Ricky.

Of her dad ,who beat a booze problem and is making a comeback, she said: 'I've watched him when times were good and when they were not so good. I've seen strange things.'

She is kept so busy that she usually just wants to fall into bed at the end of each day. But when she can, she makes a point of seeing the same crowd of friends she has always had. 'My relationships haven't changed in any way', Wilde said. 'My friends are very protective. They don't hassle me or ask me for autographs, which would be the easy thing to do.'

in the future, she would like to try a movie. Lack of acting experience is no obstacle she says, using 'One flew over the cuckoo's nest' as an example. 'There were very few trained actors in that', she pointed out. 'Learning to act is not necessarily all that good.'

Wilde does worry that people will limit her to being just another singer in a rock 'n' roll band. 'There are lots of things I'd like to do, it's just up to me to prove that I can', she said. There are lot of sceptics who say she won't make it in concert. 'I'm mentally prepared, but not physically', she added. 'My big worry is that I'll be so excited that I won't be able to sing.' 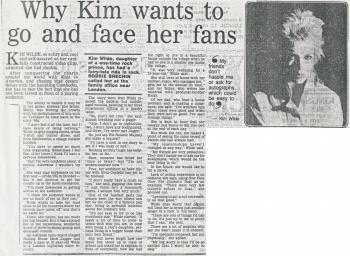