Falklands hero Michael Banett, who lost a hand in a booby trap explosion on the islands, had a wild old time when he celebrated his 21st birthday. He was visited in hospital by pop star Kim Wilde. It was a fellow patient who told the Ministry of Defence that Gunner Mike was a great fan of Kim.

They passed the message to the Sunday Mirror - and we made sure Kim was at the Queen Elizabeth Military Hospital in South Woolwich, South London, for his party. She helped him blow out candles on his birthday cake and presented him with signed copies of her records.

Michael, a missile operator from Bradford, said: "What a wonderful surprise. I have been a fan of Kim's since her first record. I've even got a picture of her tattooed on my arm."

Kim said: "it's flattering to realise I have such brave fans as Michael and I was delighted to come here." 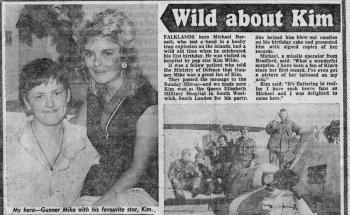