[Frontpage of the newspaper:}

Kim Wilde, English, 21 years old, queen of teenagers from all over Europe: with a few discs she sold 5 million copies. It's the new rock Lolita. We will see her tonight at "Mister Fantasy" (Rete 1, 22.25)

Kim Wilde, 21, and the new queen of teenagers: 5 million records sold We will see her tonight at "Mister Fantasy": her own story full of mysteries.

"A delicious morsel" would say one of the many tough men in the trench coat, raised collar and hat on the eyes, of the 'black' cinema of the 50s: The object of the most understandable desire is Kim Wilde, young and blonde beauty of English rock, gracefully offered this evening on TV by "Mister Fantasy" (Rete 1, 22.25). Orphans of Debbie Harris we can console ourselves with this 21-year-old starlette from the European hit parade. No concerts, a pounding promotion on TV: an LP and four singles in the upper areas of the chart and almost five million records sold.
The posture is that of the sulky and indolent doll, the sex appeal concentrated in the fleshy lips, in the round arms, in the soft complexion, in the "mandolin" sides designed by a luthier with a safe hand and taste. A pocket battleship: maximum firepower in the smallest footprint.
The opinions on this perverse and mysterious Lolita - nobody has yet listened to her live - are disagreeing. Accidious English criticism, chivalrous cousins ​​from beyond the Alps. Let's hear "Rock & Folk": "It's rockflirt, with the taste of the first kiss stolen from a little girl. Produced by her brother Ritchie - her father Marty, a former glory of British rock'n'roll, he writes the songs - Kim plays a pop disguised as a new wave and cooked in the family according to the old, infallible recipes of the 60s. Cheeky guitars, smart and trendy keyboards, graceful arrangements that use ska and rock'n'roll with a very current sound, with a controlled denomination of origin. Fresh, innocent, loyal like certain slightly fruity wines, to be drunk by the first spring. We recommend "Young Heroes", "Checkered Love", among the fast, sparkling, gritty pieces and a slow assassin like "You'll Never Be So Wrong". "Cambodia", electronic single and tearful, complete with comic strip on the cover, makes history in itself.

We met Kim in Milan during a party organized in the studio of a famous photographer. Beautiful, sleepy, available to the needs of photographers and journalists, as vague and nebulous about a private person that the record image wants to keep as hidden as possible. Maybe because she looks too much like that of many other English teenagers. She speaks in a low voice, as if she were uncomfortable, does not add much to the exhaustive biographies that her record company has distributed among canapés and pastries. She doesn't want to talk about her father. But when he gets up and poses, the wild teenager of the cover photos explodes. 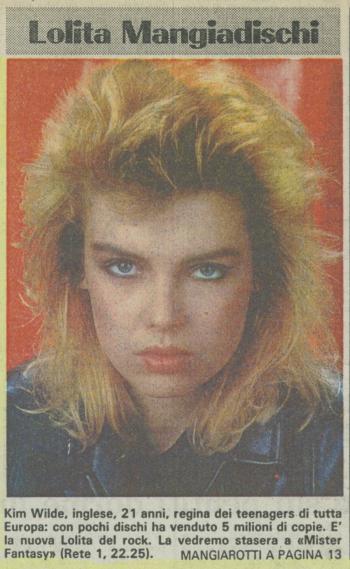 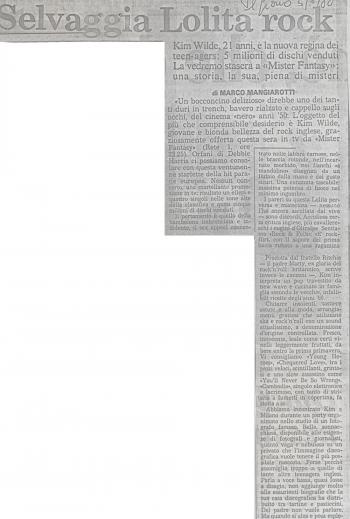