A lot of people thought that Kim Wilde had a rather unfair advantage over the opposition when she started her pop career, and dismissed her as a 'manufactured' star. The daughter of rock and roll star Marty, sister of songwriter (with Marty) Ricky, 'packaged' by starmaker and Rak boss Mickie Most, she certainly did get off to a good start - even mum Joyce is involved, as her business manager!
But she doesn't feel 'manufactured'. "I'm certainly not manipulated, I can tell you. If anything, I'm orchestrated; I take the advice of all the experts around me."
Life changed dramatically when Kim's first single Kids in America was released in the summer of 1981. It was a worldwide hit, and suddenly Kim was hailed as the new Bardot, a replacement for Debbie Harry as pop's pin-up girl. But Kim's feet were planted firmly on the ground, and she worked hard, scoring more big hit singles, determined not to be a one-hit wonder.
But it wasn't until autumn 1982 that Kim performed live in front of an audience. Marty advised Kim to play a short tour in Denmark so that she wouldn't be taking to a British stage as an inexperienced performer, and the usually undemonstrative Danes literally went wild!
After that start, Kim stormed onto the British stage to an equally rapturous reception.
She intends to work hard to improve her singing and her stage show, to prove her critics wrong. Overnight sensation certainly, one-hit wonder never. 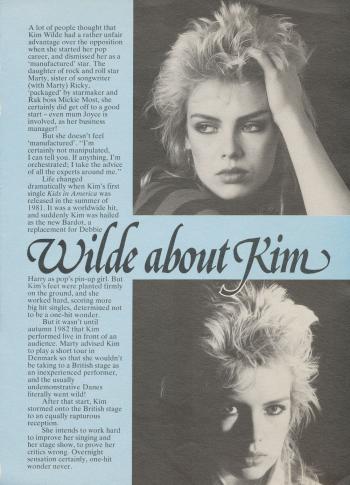