Wilde and wonderful: the moment Kim came alive on stage

Kim Wilde sat in her dressing room next to a plate of ham rolls and grinned excitedly round at the roomful of people through a mass of flowers and telegrams. "I just can't get over it", she kept saying. "That reaction! I could be high on this for a fortnight!"

The smile faded all of a sudden and tears started to stream down her cheeks. Tears of relief, joy and exhilaration which came, and just wouldn't stop. Friday night was the most exciting moment of her life, when she stepped out on stage in Denmark to do her very first live show.

Two years of hard work, after a string of worldwide hit records, depended on that night. No one knew if she could make it. She was dazzling.

After the first number, the crowd was already on its feet. And the wave of hysteria spread until the audiece surged up to the stage, throwing flowers, clapping, stamping and whistling.

They demanded three encores and the thunder of applaus rang out for a full ten minutes after the band had left the stage.

Kim, twenty-one, starts a major British tour next month.  And that's why her father, Marty Wilde, arranged for her t oget used to a live audience in Denmark so that she wouldn't make an inexperienced debut at home.

Kim, dubbed the Bardot of pop because of her sultry looks and simmering sexuality, is one of the nicest, most levelheaded people you could meet.

She bops around in a pair of old jeans, drinks coffee out of a battered old plastic beaker and is perfectly happy to be seen without any makeup. She has a very rare charismatic quality - but is not aware of it.

"I read about myself, but I can never really believe that it's me", she says, sipping a glass of white wine, one arm over brother Ricky's shoulder. "Like being on stage tonight. So often I've been one of the crowd, but when you see all those faces looking up, waving, shouting, and it's you that's making them happy, it's magic."

The storm she created in Denmark is expected to spread round the world. Is she frightened?

"No, not really. Apprehensive maybe, because I don't know what to expect." The celebrations bubbled on, with congratulations and toasts for the band. But it was Kim's night. "I can't explain how I feel", she said, "but I know my life has changed. Nothing will be quite the same ever again." 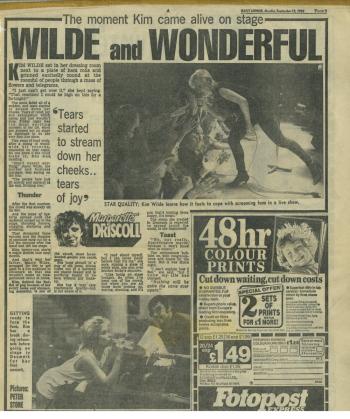