Now that Kim Wilde has signed a record deal in the U.S.A. she's all set to become an international star. Considering the speed at which she's zoomed up the usually treacherous path to fame it would be no surprise if she'd become a bit aloof. But, as we found out, she's anything but!

Kim, although she now realises that she's the poster on a lot of guys' walls, is completely unaffected. Just as well really, as her father is not someone who puts up with conceit!

"He'd soon have me out if he thought I was becoming too big-headed! Having been in the public eye himself he's all too aware of the dangers. And leaving home's not something I fancy doing at the moment. If I did move out, I'd share a flat with a friend. But I'd be worried about ruining the friendship! So home's the place for me!

She is trying to get away from always being referred to as Marty Wilde's daughter, though.
"It got me down for a while. It felt as though everything I was doing was just an extension of what my father had done. I'm a person in my own right - the person people see on telly is very much me. I'm pleased with, for example, my appearance. It's not just some plastic image."

But Kim's had to right for her own identity.
"At first, people were brought in to do my hair and face but I soon put my foot down about it! Why should they know any better than me how I should look!"

True enough - that way, at least her mistakes are her own!
Does she like people thinking she's glamorous and sexy?
"I don't really think about it that much - I love glamour, though, and in some ways I wish I was a bit more glamorous. I'd love to wear all those long, flowing off-the-shoulder dresses! I don't think it's really me, though! And I hate people to compare me to Debbie Harry!"

We don't think it matters - people seem to go for her just as much in monkey boots and an old leather jacket! Steve Strange, for example!
"We're just good friends", she said when we asked her! We believe her, but reckon thousands wouldn't....! 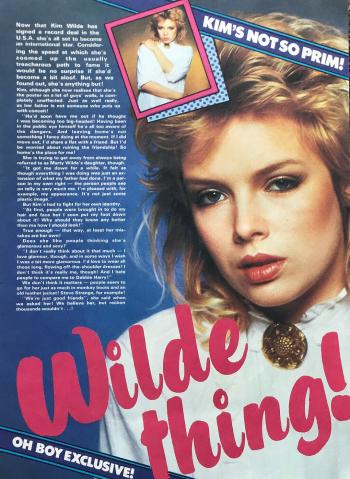