For the past two years, Kim Wilde has been pop's N°1 blonde bombshell. But now she's got a rival... Debbie Voller took Kim and Marilyn for a lunchtime showdown. "Say cheese," said Steve Rapport.

A quiet Chinese restaurant- Kim's familiar face and visitor so the waiters fuss when we walk in and fetch a free bottle of vino in honor of the occasion. Not only is Kim meeting Marilyn, it's her 23rd birthday!
On goes some Kim Wilde music and she cringes with embarrassment while we wait, and wait, and wait... One starving hour later Marilyn bursts through the door and make a beeline for our table.
"Hello Deborah, oh I just love your make up, the way you put it on- like you just don't care! And that shirt, I never get tired of seeing you in it!"
Marilyn has started as he means to go on. Kim tries not to look too daunted and orders another bottle of wine for good measures and courage!

Kim: "It's my birthday today!"
Marilyn: " How old are you?"
Kim: " Well I thought I was 24 but I've just discovered I'm only 23."
Marilyn: "I thought you were much younger than that. I thought you were 18 or something. I was 21 last week. I'm a Scorpio."
Kim: "Goddamn it, so am I!"
Marilyn: "D'you like these earrings I got for my birthday?"
Kim: "Are they rubies and diamonds and things?"
Marilyn: "Hope so. I've got to have something to pawn at the end of my career!".

Marilyn: "I remember meeting you about three years ago, at the Embassy Club, d'you remember? You had a record at number two or something and I was saying, 'What do you do dear?' and you said 'I'm Kim Wilde!' and I said, 'Yes, but what do you do?' "
Kim: "Did you have a dress on ?"
Marilyn: "And I saw you at an Elvis Costello concert, right at the back with all those leather people, all those big greasy bikers round you! You're into that aren't you Kim?"
Kim: "Rubbish!"
Marilyn: "You've got a boyfriend haven't you... who is it?"
Kim: "Hah! I've made a rule for self-preservation and sanity never to ever talk about it, you know what I mean? It's the biggest pain in the arse in the world to talk about it, don't you agree? Don't you agree?"
Marilyn: "I don't care who knows what I do."
Kim: "Well you will do, you'll care a lot. It becomes the most important thing after a while."
Marilyn: "But you can't keep something completely to yourself."
Kim: "Bullshit! You can. That's what other people would have you believe, so that you do talk about it. It all depends where you go of course, you've got to go to quiet places together."
Marilyn: "So, this is where you'll be on a Thursday night with your boyfriend. I'll have to come down!"

Kim: "Have you seen Steve Strange lately, are you a mate of his?"
Marilyn: "Ugh! You've just put me off my food. Sorry, I'm only being truthful. No, I don't like him."
Kim: "I just wondered how he was, I haven't seen him lately."
Marilyn: "Listen, why will there only be two pall bearers at Steve Strange's funeral? Because there's only two handles on a trash can!"
Kim: "That's terrible! I know him and I think he's great."
Marilyn: "Oh he knows I'm only kidding. He ripped my dress off once and I've never forgiven him for that. I had to run around the streets in suspenders and a bra."
Kim: "But I thought you liked people who were mental and did things like that!"
Marilyn: "I like people who are funny."
Kim: "Some of your jokes are funny."
Marilyn: "But I like really cruel jokes. They're not the kind you laugh at, they just give me self-satisfaction because I like being evil."
Kim: "I think people who make you laugh are so precious, there's so few who can do it. I love Eric Morecambe and Lenny Henry does me in."
Marilyn: "I love that American comedienne Joan Rivers. She gets in front of an audience and slags people to death. Like me! like me!"
Kim: "There's a severe lack of funny people in this work. I'm only funny when I'm drunk."
Marilyn: "You're funny now!"
Kim Wilde is by now getting wilder. She's got a lot more lip but everything's coming out a bit slurrrred. Marilyn wisely switches to Coke for a while because he relies on keeping his sharp wits about him...

Marilyn: "What do you do with photographs of yourself that you hate? I cut mine up!"
Kim: "There's usually only one in a thousand photos that I think's any good."
Marilyn: "Don't you cut them up then? You could tell the photographers to come round and then cut them up in the bathroom."
Kim: "That's not a bad idea. Some editors are really cruel - as soon as they get a picture of you making an arsehole of yourself they'll print that rather than a good one. Like that picture of Boy George when he'd just got up in the morning!"
Marilyn: "That was in the afternoon - truth hurts!"
Kim: "Well I know I look awful in the morning."
Marilyn: "You don't, Blanche. Don't lie!"
Kim: "So tell me Marilyn, how do you keep your skin so fresh and dewy-like?"
Marilyn: "Well I use crushed beetroots and rub them delicately into the skin - well, that's what Jerry Hall told everyone to do in a magazine. Can you imagine? The only reason she did that was so all those poor little girls reading it would go out and pick beetroots, stick them all over their faces and ruin their skin. Slag! That's like telling someone to use a purnice stone to get rid of spots!"
Kim: "My friend's a beauty consultant and she's flogged me all this stuff from America that's pure product, it doesn't have any gush in it. Is all that hair really yours?"
Marilyn: "Yes, it's mine. I bought it!"
Kim: "Did you tie it into your own hair?"
Marilyn: "It's plaited, yeah. You'd look fab with really long hair, unfortunately."
Kim: "How do you wash your hair - dry clean it?"

Kim: "I'm very disillusioned. I've just been measured for some clothes and I was four inches bigger than I thought I was."
Marilyn: "You're very voluptuous aren't you... sex kitten!"
Kim: "Oh don't start that. You're lucky you're a guy, you'll never get called a sex kitten."
Marilyn: "What d'you mean - I WILL!"
Kim: "But it's the most degrading thing to be called."
Marilyn: "Oh I love it, pouting pussy!"
Kim: "It's disgusting, I hate it."
Marilyn (scratching his head): "These nits are driving me mental. Oh, I've just made millions homeless!"
Kim: "I thought you looked very good on Top of the pops in that sequinned suit."
Marilyn: "I really got slagged off for that by the Sunday People. They said I was just a 'drag'! Still, I want to shock people. It's nice to be controversial. Have you got a record out?"
Kim: "I have but it's rocketing down the charts. Never mind, I'm going on tour soon. I'm gonna be great this time. Last year I was a bit too afraid of making a fool of myself. I've heard some secret gossip that Bananarama are doing some gigs with a band soon!"
Marilyn: "Oh what a good show that'll be - comedy! I haven't had a good laugh in ages. Bananarama go to every single opening in the world, don't they? I swear they'd go to the opening of a toilet seat!"
Kim: "I like that, that's the best one you've cracked all lunchtime."

Kim: "I think my most loyal fans are the French fans."
Marilyn: "I think your most loyal fans are your family. My mum thinks I'm fab, I'm an only child. I've got a step-sister but I hate her. All parents want you to be miniatures of themselves 'cos it's like their lifeline to knowing that their name'll be carried on. It's such an age-old tradition. But nowadays I think people are more individual and when people love their families, they actually do love them. In the past, you had to love them."
Kim: "It's the same with grandparents. I mean, I've just discovered my grandparents as human beings rather than Granny and Grandad. They're fantastic people."
Marilyn: "They usually are, because older people have got all those experiences and memories and knowledge, and they just get overlooked because they don't look young anymore."
Kim: "People get condemned for their age and they also get condemned because of the clothes they wear, that's why I'm so anti-fashion..."
Marilyn: "...says she sitting there in her expensive Kenzo shirt!"
Kim: "Okay, this shirt cost me a lot of dimes, but all that clothes shit really annoys me. I don;t associate myself with a certain fashion at all."

Marilyn: "I've really enjoyed this lunch."
Kim: "I've had a great day, you've done most of the talkoing and I've done all the laughing. It's really nice because normally we wouldn't have met unless it was on European TV or something."
Marilyn: "You're really big in Europe, aren't you Kim? Have to go on a diet!" 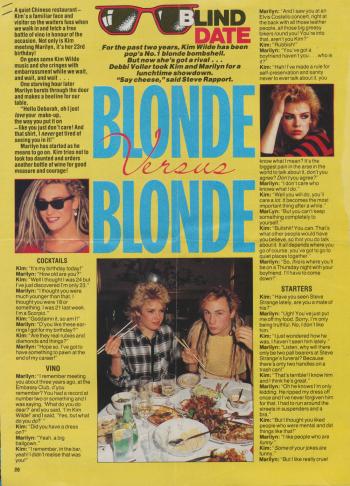 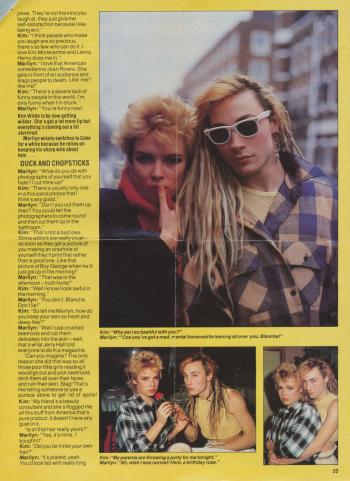 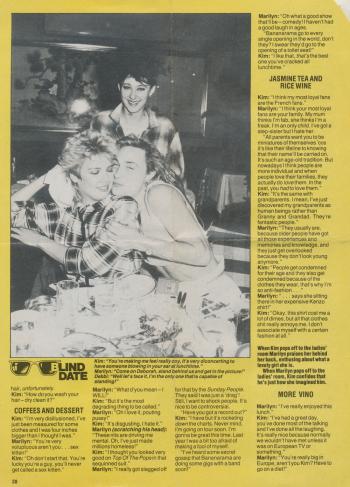 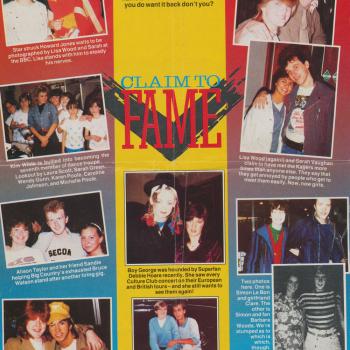