In a good mood and inspired by two glühwein, Kim was very impressed with the artists on our Blind Date cassette. With the songs she was less impressed: many lyrics couldn't stand up to her high standards, many arrangements she simply found too weak. About the current music scene Miss Wilde was well informed and she also showed off her long hidden aerobic talents to "Doot doot". She won't, however, release an aerobics album of her own in the future.

Tina Turner: "Let's Stay Together"
This is the Al Green song, isn't it? Tina Turner sings it brilliantly, she is a performer who I really admire. Also the Heaven 17 arrangement is great I think, especially the oldfashioned violins. It's a pity you can't hear this with me, the song is really good. Only the synth solo fails a little.

Mink DeVille: "Each Word's A Beat Of My Heart"
The voice, the arrangement with guitar and drums - it sounds a lot like Elvis Costello. No? Maybe an American? Mink Deville, aha. Not bad. Willy DeVille has a good voice, but I prefer Elvis Costello. I won't buy this record, I was never such a big fan of his.

Gist: "Love At The First Sight"
It takes an awful long time before the song really takes off! It's like waiting in the station for the train to come. "She gave him a grin", that means something. "He will spend the night with her". Aha! Between the two something funny is going on, but he didn't notice. The song falls under the category corny for me. I don't like this.

Irene Cara: "Why Me"
It sounds suspiciously like Irene Cara. When I heard "Why Me" for the first time I wasn't sure who sings there. It could have been Iron Maiden or Gillan, because of the "heavy guitar", you know... but then this wet drum sound comes in, which isn't typical of a heavy metal band.
So it was Irene Cara. She sings unbelievably well, but the song is weak. It's a song that would make me leave the dancefloor if I were dancing in a club. A lyric like this I simply hate. "Why me, I loved him more than anything" - this "more than anything" turns me off. But, Irene has a great voice. When she sings better things I could listen to her all afternoon.

Freur: "Doot-doot"
I heard Freur for the first time during my aerobics class. I sat on the floor and tried to reach my toes. It was devilish! The song is clever and has atmosphere, but it brings back ugly memories of my tortured spine. Next please.

Genesis: "That's all"
That's Genesis or Phil Collins solo. I love both. Phil Collins is a very talented type. I would love to work with him - or drink a cup of tea with him. It's really beautiful to hear good singers - and this cassette is full of them, despite the sometimes weak songs.

Thompson Twins: "Hold Me Now"
Aha! Thompson Twins. This song can really touch me. Just a shame that I don't like Tom's voice, even when he is a nice guy. When one knows the artist, the song mean a lot more too. I trust the Thompson Twins can come up with even better songs.

Pretenders: "2000 Miles"
That's Chrissie Hynde. The song is brilliant. It's among the best songs on the cassette. Chrissie is great. When I was at art college, I was a real Pretenders fan. For me the Pretenders are equal to Chrissie Hynde.

Tracey Ullman: "Move Over Darling"
Tracey is fantastic. She really makes me laugh. I wanted to sing this song during my 1982 tour, but we already had too many slow songs. When she released this, I thought "Damn, she just snapped up a hit single." O yes, Tracey is sweet and talented. The best thing about her are her performances and crazy videos. She is a real comedy star. And there's no other way to sing a bourgeois song like this than she does. 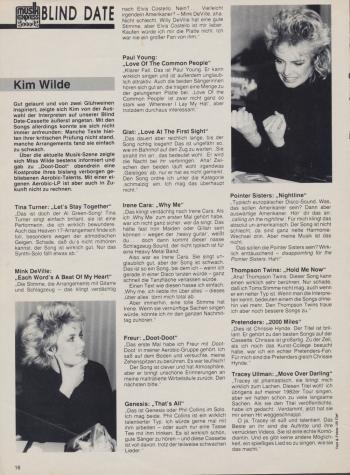