Two years ago Kim Wilde seemed a typical teenager. She wore the standard uniform of jeans and T-shirt and chatted with the cheerful confidence of a naive youngster who knows all the answers - even if she doesn't understand the questions.

See her today in one of the sexy dresses she wears with such poise or better still, hear her talk, and it's hard to believe she's the same girl. 'In those days', she says, 'I wasn't sure I had a lot to learn. Now I feel I know absolutely nothing. It makes me shudder to think about it.' At the time of her first hit, Kids in America, Kim lived at home, sheltered by her family. Her father Marty, the Fifties' pop idol, and her brother Ricky wrote and produced all her songs.

Since then international fame has brought 22-year-old Kim a BMW car, the independence of a flat she shares with her boyfriend, saxophonist Gary Barnacle, nd a determination to put her career first. And that, she is firmly convinced, means looking after her health. Wading into an Italian lunch, she explains: 'I've got this hatred of double chins. I'm determined never to have one. I always look at a woman's jawline. I was getting a bit podgy. Watching re-runs of some of my TV performances I kept noticing this little sagging lump of flesh. I thought 'My God, it's already happening and I'm only twenty-one. What will it be like in five years'time? There'll be six of them and the only solution will be to cut them all off.' I found it very strange being viewed and treated as a sex symbol yet feeling like a lump. I decided to act before it all got out of control.'

She gave up smoking and banished sugar and salt fro her diet. She started serious work in the gym. 'Since then I haven't been ill once', she announces triumphantly. 'Yet before I used to have a serious cold and bronchitis every two months. I used to be asked to advertise teen bras. Now maybe I'll get to model tight lambswool sex-kitten jumpers!'

The girl who once was so besotted by Gary Glitter laughs about being a sex symbol herself. 'I am just a human being. I'm a sensible person and I'd like to be represented as such, rathen than a wild and woolly blonde. The hair's from out of a box anyway.'

As for her love life, she says: 'If my Gary walked out tomorrow I'd feel very sorry for myself. But I'd still go off to Newcastle for a radio interview. Or any other goddamn place I was asked to go. If people want o be in my life the way it is - which luckily for me, most accept - great. But anyone who tries to impose their code of conduc ton me has no chance. Of course, with Gary I find myself saying 'I wish he wouldn't do that. I wish he'd be the way I want.' But you have to let other people live their lives the way they want to.'

Kim's happy family life has made her determined to have children of her own. But for the moment her four-year-old sister Roxanne is enough. 'She's one of the best things ever to happen o me and the family. The first utterance she made - apart from crying - was a little song Ricky and I'd taught her. She didn't sing the words, but lyring on her back she cme up with the tune. It was uncanny. Roxanne represents the future to me in a very special way. My mother had chuldren when she was forty. By the time I get that old, medical technology will have advanced so there'll be very few risks. I wouldn't like to wait that long, but I can if I want to.' Kim is very aware that neither her career nor her love life has dealt her any severe blows as yet, though she suffered a minor trauma when her record sales started to slip. 'I've never let success go to my head', she says, eyeing the sweet-trolley appreciatively.

She said: 'It was always just my dad's job. I saw the business backstage at Northern working men's clubs. I saw the reality, the downside. I love the glamorous bit for wha tit is. I loved the Duran Duran coert for Prince Charles and Princess Diana. I just wish I could have met her too. You see, being a pop star is still exciting for me.' 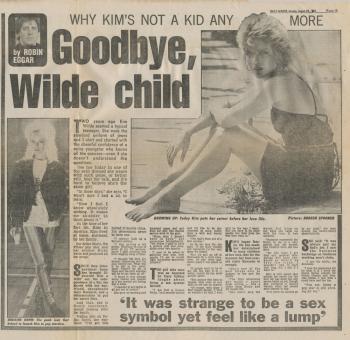