Kim Wilde has got a long time to wait till her great ambition is achieved. Twenty-eight years, in fact.

Because, she says, her ambition is to be fifty years old. 'Growing older is a really lovely thing to happen to anyone', 22-year-old Kim says. 'I can't wait to be 50. Yes, I mean that! My mother holds very similar thoughts. She's forty-something, and she's always saying the same things. If you can accept the way you are, then you can accept things at the age of 50, just as much as you can at 22.'

Meanwhile, Kim is enjoying being young and famous. Her already successful career as a pop singer gets a further boost tomorrow in paris, where she begins a tour of nine European countries. The three-week itinerary is her most-demanding to date and she says: 'I'm so new to this kind of thing that it's still all very exciting'.

'Besides, I've a lot to learn about performing in front of an audience. I think I have the potential to be a good performer, but I need more experience and this kind of tour gives it to me.'

But despite her limited mileage on the road, Kim has come a long way since she left art college four years ago. 'Like most teenage girls I felt terribly insecure', she says. 'I never thought I was a raging beauty, and I don't think anybody else did, because I wasn't. You either feel beautiful or you don't and in those days I felt really awful. Probably because I was! I specially hated my bottom lip. I noticed that I had much fatter lips than my friends, particularly the lower one. And that upset me. Now it's very fashionable and considered sexy, so I feel okay about it.'

Kim was still at art college when she decided to dye her naturally mousey hair. 'I nearly went black', she says, 'but my friend had black hair. So I decided to be a blonde. My friend's black hair made her look rather hard, rather menacing. I knew that I had rather a moody looking face, so black hair wasn't for me. I was just fed up with being mousey, so I went to my hairdresser and told him: 'Just make it as bright as possible.' I walked out looking like a torch. It wasn't till the roots had started growing through that I decided I preferred the halfway stage. It looked more natural. That's how I like to keep it now, and a hair lightener, which I buy from a chemist, does the job. I bung that stuff over it every couple of months. But there's every chance I won't stay a blonde for ever. I may go back to being a brunette.'

Despite her self-criticism, Kim is quick to recognise her good points. 'I know I've got good eyes, so I try to make the most of this part of me', she says. 'Whereas I once felt awful, now I feel rather nice. Life for me has become far less treacherous.'

But as the daughter of former pop idol Marty Wilde, Kim is the first to admit she has never known hard times. 'I grew up in a family where money wasn't really that much of a problem', she says.

'I'm sure my dad and mum had their bad times, but they never told us about them. As far as I was aware, we were a family that could afford anything we wanted, though our needs were few. We didn't go off on fabulous holidays. We didn't lead a terribly extravagant lifestyle, but we had everything we wanted. We were never short. As a result, money was never a big problem, as it was with some of my friends. I therefore developed a kind of curious independence about money. So it's nice to know that I now have my own money, and that I've earned it, which is very important to me. But I don't worry about it.'

One subject that Kim won't discuss is boyfriends. When she is asked about the men in her life, she laughs nervously, throws back her head and explains that it is what she calls 'a controlled area'. She says: 'My private life is a prized possession. It means more to me than my gold and silver records. Even my bank balance. If you have something previous you lock it up. That's why I don't talk about it!' But just to emphasise that she hasn't any sordid secrets to hide, she adds: 'I do live alone in my flat.'

Kim doesn't have much time for strict fitness and beauty regimes. 'For example, one minute I'm peroxiding my hair, which probably isn't doing my system any good at all', she says. 'The next minute I'm conditioning my hair and rubbing pure products into it. Sometimes I go to sleep with my make-up on. At other times, I'm cleansing my skin and worrying about it. Food is one of my weaknesses. I prefer foreign food, but I hate French food. Oriental dishes are my favourite - the hotter the better.'

Kim doesn't have any real idols and is often scathing in her criticism of her pop contemporaries. She says that Toyah Willcox is wise to return to acting 'because the critical acclaim for her acting is far better than it has been for her music'. But she does have a soft spot for Boy George, even though they've never actually met. 'The first time I saw him was in the audience when I was appearing on Top of the Pops. Boy George was dancing away and I remember looking down at him and wondering if it was a he or a she. He really is a bit strange. But I admire and respect him enormously - because he is so talented.'

Kim may consider George a nice boy, but she is in no doubt about her perfect man - Cary Grant. 'I saw him on an old film the other day and he just did me in', she says. 'His looks. His everything...' 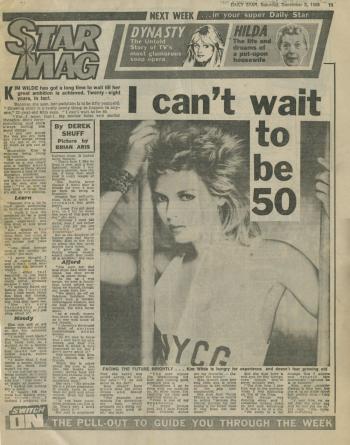