Blond and young. Sexy. Electricity and movement. The image of Kim Wilde has found a response. But is the image the one of the real Kim Wilde - what is the stage of energy and rebellion rock chick and as a private person? My natural? As a person?
Our suppliers Timo T. A. Mikkonen met personally with the slightly confused super star just before the Helsinki concert. There was smalltalk and an excavation of Kim's deepest thoughts. Kim confessed to being like any one of us - shy, sometimes uncertain.

From cover photos and cassette casings figures she seemed somehow familiar. She does not actually reminded anyone, but something in her signaled the past. One that appears from time to time again. In the new format and the new face. In short: the time is ripe.

British and Scandinavian rockers orbiting very often the same route: Copenhagen, Stockholm and Helsinki, as well as in addition to a few other medium-sized Nordic city. They either take the momentum from here towards the larger venues or then disappear. It is the business of life.
Nevertheless, Kim Wilde's coming was news. Kim Wilde's career is so far only a few videos and albums, as well as over a dozen concerts in length, but Kim is the name. In her there is something to which today's young people are drawn to. Just like their mother quarter-century ago, when Paul Anka became a superstar already large in the world, that Kim is not yet quite the case.
Kim has other virtues. She can be what you want. To be sitting in the same spot and fuss.
Kim's father Marty Wilde and rock and roller at the time of Elvis' best days of the British Isles Tommy Steel, Adam Faith and Cliff Richard. Brother Ricky is also a professional in the field. Producer Mickie Most has over the years produced a European entertainment stars in the sky Brenda Lee, Nancy Sinatra, Julie Felix, Lulu, Mary Hopkin and Suzy Quatro. Mr. Most believes that Kim is an "ideal type".

The revolt against the unknown

Have your father and your brother given you any good advice for the tour?
Not particularly. However, the father helped the band practicing, lights and sound building and other similar things. Father has experience in these matters. But they do not come, neither in detail tell me what I should or shouldn't do.

Were you a child with the father on tour?
Every now and then, and a few moments I embrace the tour-life. The most important matter is, above all, we take care of our work. You must know how to draw the line between work and rest. This job is to be able to continue for a long time.

Would you like to appear in a particular group or artist, let's say, with Michael Jackson?
He is certainly at the moment the most incredible artist, specifically for solo artists. I think no one since the days of Elvis' has been equally unparalleled. He is a phenomenon, if anyone. Of course, I would like to.

When rock 'n roll three decades ago began to move the youth, it was part of a rebellion. What are you rebelling against?
I do not want to rebel, but otherwise. It seems to me that I revolt against something, but I do not know what it is.

What are the differences you have between the American and British rock?
Sometimes the difference is very obvious. Often, the Americans will be so much better musicians than we do. In the field of technology in particular. They have more experience and sense of style - and much longer than we hae a music history in the backdrop, country, blues, etc. And, of course, in the field of more human beings...
Both the British and the American entertainment has its best side. I do not mind the direction of music, but I appreciate the many differences.
Yes, I know the direction of the American weaknesses, but this is not British at all flawless style. Whether speech or music in society.

European presentation is probably one of the urban brutality, while the original American Rock got was a laid-back countryside go by?
Yes. Although Elvis' initial expenditure was furious, it was still raw rage. Otherwise I really like, for example, Hank Williams or George Jones songs, really good country music. And then the black music is for example Aretha Franklin ... so, Americans have such great vocalists, of which they can be rightly proud of.

Me, myself and I

How did you decide to become a musician?
It was a long time in my mind. I listened to a lot of records and I was singing along. I do not know why. Sometimes, though, I'm hoping that might be found in another area. But here it is, but we are.
The fact that all went like this, not a lot of puzzled me. I knew it from an early age. I was hoping semi, semi waited for this to happen before long.

You are now 23 years old. What else have you had time to try to arrange?
I went through school. My school was such that there focused on the arts, not sciences. So I went own way over time.

What do you think of your fans? What would you like to say to them?
Scenic back leather admirers tend to get very rough image; but they are polite and friendly. I have also noticed that very many people smile at me kindly when I perform. They do not just stare at me, or likely to Mecca. The smile really warms me.

Do you have a so-called contradictions. your imagos, with, in terms of what people think you are, and think?
I have noticed from time to time changed their convictions, even though I have had a million times to answer the same questions. I am no longer so sure about things of which I was once supposed to be very solid opinion. It's good. I can not be all things definite answers. I know that I'm here and that you are there and that there is a tape recorder.

Everything appears out of the tip of the iceberg ... you too. Who, therefore, are you, Kim Wilde?
It is a question that everyone should do in their own right. People should be at least as interested in what they themselves are like, as they are in someone else, for example, Kim Wilde.

I watched and listened to Kim next to me, I realized what the image was rotated on the basis of the images in my mind. Mouth, bleached hair and a close look as seen told something of the same charm of the force with which their own time and their own way someone Brigitte Bardot was boosted by hand on the big screen of the French state finances and baffled the minds of men and women. Now is the time for video genes and Kim comes up to the photos and video recordings as well. The true self, or the essence of the stage are another story. 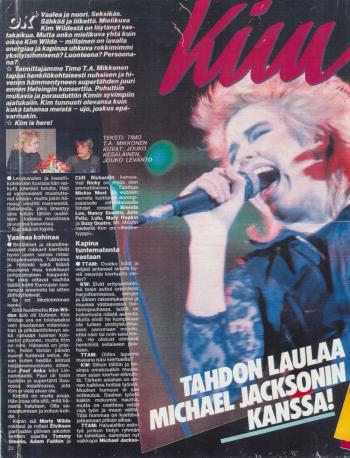 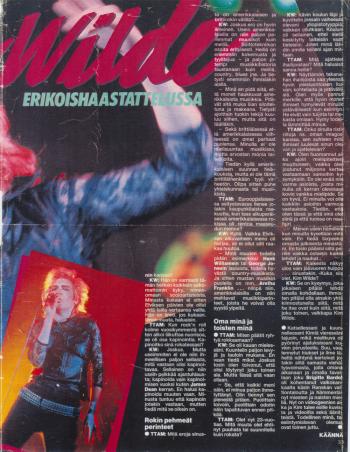 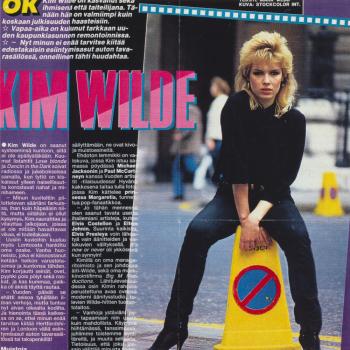 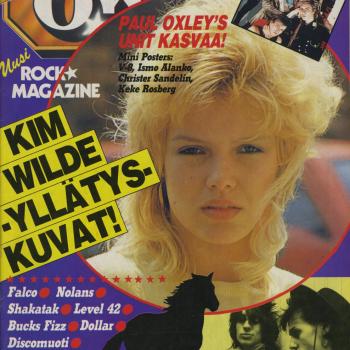