I'm so proud of my kids says Marty

As Kim Wilde's latest record, Love Blonde, hits the charts, her father, Marty, has been telling me of the incredible irony that halted his own career as a pop star.

For it was after Marty's marriage to Kim's mum - ex-Vernons girl Joyce - in 1960 that the hits started to dry up. Marty Wilde first appeared on the scene in the late fifties in TV shows like 6.5 Special, Oh Boy and Boy Meets Girl.

His first hit record was Endless Sleep in 1958 and was followed by Donna, A Teenager in Love, Sea of Love, Bad Boy, Rubber Ball and many more.

Emerging at the same time was Cliff Richard and there was a great rivalry between the Marty Wilde fans and the Cliff Richard fans as to who was the King of Pop. In those days girls became disenchanted with their favourite pop star once it was known he was married. In their eyes he was no longer 'attainable'.

Cliff went on to be a bachelor boy. Marty decided his own personal happiness was more important than his public image. "Newspapers had been following Joyce and me around for months, they were even hiding in doorways", he told me. "Eventually, we announced we were engaged, although I knew that to many fans a male artist getting married was the kiss of death."

The following year Kim was born, and brother Ricky arrived in 1961.

Throughout the years the kids were growing up Marty was on the road doing his Rock 'n' Roll shows in theatres, clubs, pubs - "anywhere that would have me."

Surprisingly enough, Marty had no inkling that Kim was to become a star.

"It was Ricky I felt sure about", he said. "He'd worked with me in a band since he was 15, and I knew he was going to be a fine keyboard player and arranger. He's a natural musician, as opposed to a technical one. Before Kim was 19 there was no indication she would go into show business. She'd been to an art college and I imagined her future lay somewhere in art. We recorded Kids in America in a studio in the basement of a house in Hertford. At the time I thought the record might make the Top 50. It went on to become a huge hit - the first hit record the studio ever had. When Kim did the song on Top of the Pops", said Marty, "it was the first stage appearance she'd ever made, apart from a part in a school production. When I saw her on Top of the Pops, I knew that the look was right. When you're so close to someone, it's hard to sit back and see things objectively. I've enough showbusiness experience now to know that there are many talented artistes about - but success has much to do with being the right thing at the right time. When Kids in America broke, there was a slot in the music world to be filled by Kim Wilde."

As Kim's career goes from success to success, Marty is just happy working in the background, writing and arranging songs. Currently he's having his own studio built in Knebworth, Herts. He said :"Kim will be recording there in future. Ricky will be working on a solo project as singer and musician. I'll also be on the lookout for local talent, and I'll hope to attract some new names to record up here."

How about making some records himself?

"i'd like to do a country or rockabilly album", said Marty. "If I can find time".

In the meantime, he's happy basking in his kids' reflected glory. And Joyce is pleased too. She's surrounded by a family of stars. 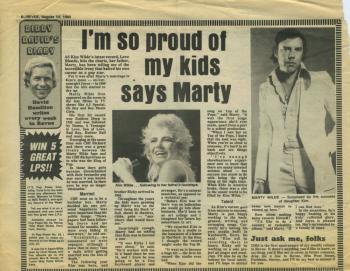