Kim Wilde was voted No. 1 female artist in Germany and became a major star in France and many other countries. She had appeared in scores of TV shows in Britain and the Continent and was the subject of her own documentary "First Time Out", filmed by Thames Television and networked twice in Britain.

Kim's achievements in such a relatively short time can be gauged by the 40 silver, gold and platinum discs displayed on the walls of the RAK offices and the numerous individual awards - a stack of Plaques and Statuettes.

Acclaimed as one of the major female stars in Europe, in the past three years she has appeared in France, Germany, Belgium, Holland, Denmark, Sweden, Switzerland, Spain, Australia and America.

She embarked on her first major tour in September of last year which took in 6 dates in Denmark, 20 in England, 6 in France, 3 in Belgium and 1 in Holland. For a debut tour she received remarkably positive views from critics who regarded her stage act as mature and an exciting experience for the packed houses of fans.

Kim, voted Britains No. 1 female vocalist by the British Music Industry, earlier this year at the B.P.I. Awards, was recently voted No. 1 in two categories in the poll, conducted by Chart Beat Magazine. They were: Best Female Vocalist and Most Fanciable Female.

Kim's new single is "Dancing in the Dark" issued by RAK Records on October 24th. The number has been written by Nicky Chinn and Paul Gurvitz and mixed by Nile Rogers. Her new album "Catch as Catch Can" is to be released in November.

The coming year holds great promise with plans for major tours in Countries which few British female artists have appeared in previously, the likelihood of a major TV series and the conquering of the few markets in which she has not already been acclaimed a Star: America and beyond a certain curtain! 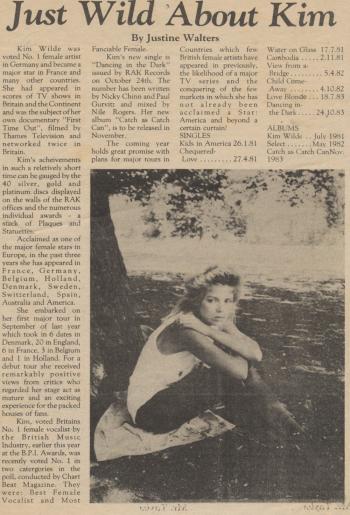