Much of the young audience did not come on last night's Kim Wilde concert at the Helsinki Ice Hall. The expected rate did not bring forth an additional consultation of a breakthrough hit with the kids in America.
Kim's concert felt too great a hall for a quite inexperienced performer and indisputable material. The hits were too few.

The old familiar Chequered Love and Water On Glass opened the concert of Kim Wilde. On stage a lively blond moved, dressed in black. A manly six part band hits hard with a dreary rock sound, with the curtains masking the hall's greatness.
The contact between the performers and the audience is left a few prominent delight. These cutting edge loyal are the only ones that Kim may be in less than a half hour to properly ignite.
The mind returns to the beginning of the British band ABC's concert, which on the circuit itself as the only liked. But at that time I was sitting in the front row and now I am almost opposite the hall around the corner from the press grandstand.
Maybe Kim had last night, hit more effectively physically close, but even this would not have covered the fast-paced playing, where the Teen Pop badly lost its topicality.
The number of spectators was formed, in turn, the organizers of a disappointment, but the young audience with limited resources had to choose between a disc or a concert, ending up with the previous one.

On the stage, Kim did not quite minimal concert experience can not control this great hall: unilateral dance steps and the movements of the hips do not bite the big stage.
But even worse is the equal thickness of the material, which is emphasized in the evening quite unnecessarily long. There is room for too many irrelevant non-hits. And then get so boring at Kim's narrow sound combined with the band's facelessness.
View From A Bridge will mind the smoke, Dancing In The Dark flashing lights, thanks. They can accommodate between tracks, which is not enough even for such superficial merits.
- Is everything all right, Kim asks in plain Finnish before the late summer success of Love Blonde. But the video in a familiar open leather outfit last night's concert would be frozen without mercy.
However, the response to Kim's question is very sluggish. In order to avoid a desolate station yesterday's teen-idol Kim's career now requires bold solutions, because so far the recipes are no longer bite.
Remains to be seen, rises the patronage of the family more self-confident and more unusual Kim Wilde. If you need to resort to external aid which may play an important background. Last night's evidence does not, however, too much encouraged.
Nice girl, pity about the music. 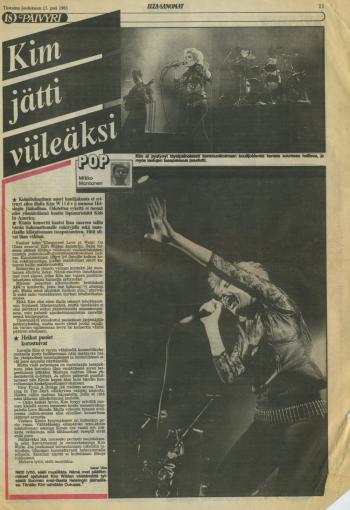