For 18 days Kim Wilde has been on the way. On November 25 she started in Belgium, had unfortunately only three dates in Germany and ended her European tour in Finland on December 13. What she offered the fans was a great show with a lot of action, a futuristic stage design and a band in good spirit - even without her brother Ricky and her 'strong shoulder' Gary Barnacle, who is going his own way now. Despite this Kim showed herself very happy, laughed a lot and convinced the fans with a strong voice and a big sense of selfconfidence.

A mysterious atmosphere at the start of the show. A mist comes up, atmospheric sounds sound in the hall. In the background there's a skyline of skyscrapers, threedimensional upwards into nothingness. Breathless silence in the audience. Wow! There she is! Kim Wilde jumps on the stage, throws a short "Hello" in the audience and starts with "Chequered love". A giant echo from the audience, Kim wraps them around her finger from the start. She has a hairband around her blonde manes, reaching her left shoulder at the end. On the t-shirt she wears above tight black trousers and black boots, is the head of a girl, that grimaces as Kim dances around. Like a whirlwind she moves around on stage, and infects her band with her temperament. Kim & co have a lot of fun and that reaches everyone in the hall. After "Water on gla"ss" the first bunch of flowers gets thrown towards the stage. Kim picks them up and waves them around. "You're okay?" The fans scream their loud answer. With her hand she goes through her hair, brushes along her body lines, lets her hands on her thighs speak volumes: "I really can't explain" she sings into the microphone and moves around like a snake. Kim's body language is transmitted best on slow songs. She seems to be very happy when she seduces her audience. But now action again: Kim reaches high with her arms, takes the microphone from the stand and throws it in a corner. "Take me tonight", she commands. Kim hots up the guitarists with her looks and dance moves. She is the boss, and convinces because of her selfconfidence. The fans are entirely there, and call out "Go go go" to let Kim go even faster. She reacts immediately and goes all out like a rocket: to the hot rhythm she poises her body tight like a bow, and explodes. Bunches of flowers get thrown towards her. The audience reacts to such a lot of erotic radiance. After so much action she has to cool down, drinks from a plastic bottle and takes small sips later. "Stay awhile" brings the audience some cooling down as well.
But then it goes on with "House of Salome". And then Kim's favourite song: "Shoot to disable". She stands before the microphone totally cool, looks into the audience with strong eyes, performs the sad love ballad about being left full of expression.
More mist. She announces "View from a bridge" and it is made stronger because of the mysterious atmosphere. The fans rave.
A change of scenery: Kim goes behind the synthesizer and accompanies herself for "Never be so wrong". A beautiful song, made even more beautiful by the lighting.
When the new single is announced the audience growls. Kim asks modestly: "Have you already heard it?" No question. "Dancing in the dark" excites the fans a lot - although the intro sounds a little bit off... The the final song comes: more mist and then "Cambodia" starts. Kim takes the headband from her head, the fans sing along loudly and the hall cooks yet another time. Then, suddenly, Kim says "Good night" - and then she's gone. But the fans won't let her go so easily: loud calls of "We want more" make Kim come back pretty quickly. She has saved up "Love blonde" for the end obviously. She plays around seductively with her guitarists and of course with her fans. With "Kids in America" she wants to finally say goodbye to the audience, but not without doing an extra long version. With that the audience is in such an excited state, that she has to return for another rock 'n' roll track. One last time she gets herself up, throws herself on the knees - Kim has really given her all! 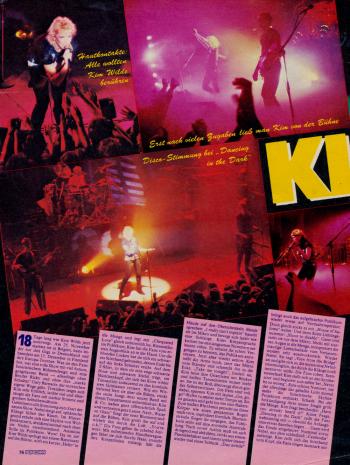 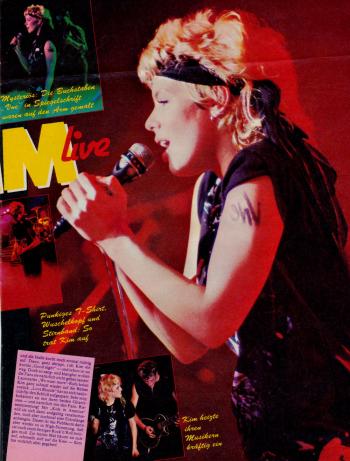