Kim, so quiet about EST

But her publicist Bill Harry admits: "She has done the course - I think for a bit of a giggle. She doesn't want to say anything about it at all. She wouldn't even tell me anything about it."

Very few students, who have paid from £150 upwards for a course in EST - it stands for Erhard Seminars Training - have been willing to talk about the training, which is designed to break down people's fears and inhibitions.

But American singer John Denver was so impressed by EST methods, which include humiliating and screaming abuse at participants, that he donated cash to the cause.

EST was founded 11 years ago in California by former car salesman John Paul Rosenberg, who changed his name to Werner Erhard. Not surprisingly, this self-confessed "discipline freak" is now a multi-millionaire and lists celebrities like Diana Ross, Beach Boy Brian Wilson and Yoko Ono among his ex-pupils. 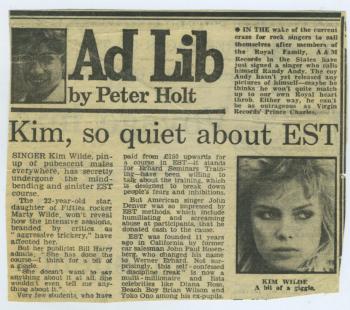