As fast as Kim Wilde drove with her black BMW to the interview - she almost rammed the Gulf of our London correspondent Gabriele Sneddon - she answered all the questions about career and private life in a spirited and open manner. Here in the original sound, the answers from Kim, which has not only changed something ...

You never had to wait a long time for a new record. What is the reason?
For the first time, I will not let myself be pushed. I wait until I have found a new concept for the next album. Four songs are ready. One of them is jazzy right. This direction makes me a lot of fun, even though I had to work hard with the singing.

And what about a new single?
Most likely, this time we will release a relatively fast and fast-paced number as single, because the last two were quite slow and did not get so high in the charts. To my taste it only comes against!

Do you enjoy the intensive studio work?
Oh yes, especially at the moment. Because it is something completely new for me to be with a live band in the studio. So far practically only my father, my brother Ricky and I have played the instruments in the earlier productions, but since I have the band everything is different. Ricky and Dad still write the songs, but somehow the band gives us a different style, new influences. And that's good! A few small problems, however, we have with the already mentioned single, because we actually do not have a big desire to produce extra commercial for the hit lists. We need our own identity and we want to be able to stand by what we are doing. So we still have not finished a single. Personally, however, this new album is probably the best of all that I have produced so far.

Did you even write a few pieces, the way you actually wanted it?
No not yet. I have too little time for this. Since I am still living at home, I have to travel a lot. But for my new apartment I bought myself a piano, so I can try to write my own material.

What about the plans for a German tour?
My office has already prepared almost everything, but is still waiting for the single and the LP to be on the market. This is very important. I do not like to come to you to Germany without having a good product in my hands. It is simply very important for us to make a good impression with you - so the tour plans were always postponed. And, quite frankly, I do not know exactly whether the German audience wants to see me at all ...

It wants, you can rely on it. We have a lot of post from fans who are on a tour of you waiting!
Yes, as I said, the preparations have already been made, and I hope to get a bigger tour before the middle of the year.

How do you stand up to an article about your alleged love relationship with the guitarist of your band?
I beg your pardon? This is the first thing I hear. Who wrote such a thing?

An Austrian magazine called "Rennbahn Express" ....
What a nonsense. First, I've never heard of this magazine, let alone made an interview. And secondly, I do not talk about my love life ...

This magazine has also written that you wrote a script for your holidays in Barbados and want to play the lead role ...
Also total nonsense.

Who are your private friends?
I have a clique! They are all young people, all from the same area as I am, from Hertfordshire. We used to go to school together. Someone always organizes meetings or a shared vacation, and I just hang out. My best friend Claire is always there. She has the better contact with the people in the clique, and when we go on vacation together like a ski holiday in Italy, she informs me exactly about everyone. We all understand each other and have a lot of fun together.

You bought a saxophone some time ago. Are you playing well?
I hardly have the time to practice properly. I bought it from a friend, but only because I think the saxophone is one of the most beautiful instruments. The saxophone player under the band has already given me a bit of something - but I find that you get a double chin - and I will not, of course! But I can play a few chords and if I have to, I have a little song.

Then you will surprise us with a Sax solo in the next concerts?
(Laughs) Maybe - you never know! I'll try it anyway.

What are you doing to keep fit? Aerobics?
No, not aerobics. I'm doing stretching yoga. I got up after my last tour, because I realized I had let myself go and finally had to do something specific for my body. Now I am a member of a private club where I train on equipment with special weights designed for the various muscles of the body. I do this at least once a week! I do not want to get bodybuilding muscles, but I want to be fit and have a good figure. My arms already have a much better shape than before! So I think yoga should be introduced at school because we neglect our bodies much too much!

You stopped smoking too. Do you still abstain from smoking?
Yes! I have not been smoking for almost a year. I have increased a bit, but not drastically. I do not want to start smoking again!

How do you feel about your "girl-next-door image," the image of the "dear girl next door," who have many of you?
In the music business everything is extreme - either one is disgusting and difficult, or one is dear and nice, just like the girl next door. Personally, however, I prefer to write nice things about myself.

How do you find the new bands that are on the charts?
I'm disappointed. There are at the moment so many non-indentifiable groups in the hitparades. I look for character, for something typical. Bonnie Tyler for example, Kajagoogoo likes me, Culture Club goes, Haysi Fantayzee does not like me at all. The latter are, in my opinion, a pure fashion show - and I personally am not trendy, but cultivate my own style in music.

Are you really religious?
No, not really. I believe, however, in Karma, that is to say retribution by destiny: if you do something bad, you get back at some point.

What about your flat? When do you move in?
Oh, that will surely last. After the next tour maybe.

Do you already know how it will look?
Yes exactly! It is a great apartment, with a large space, the living and dining room, two bedrooms, kitchen and bathroom. This is a palace for me, because at the moment I have only a tiny room at home that swells. Right now the craftsmen are in the new apartment. They tear out the modern bathroom because I have found a beautiful art deco bathroom. Actually, the entire apartment is to be furnished in the style of the 1930s and 1940s.

Are you interested in politics and their current problems, such as nuclear power or disarmament? Would you go out into the street?
I think it's good when people say they show their fear of it all. I am also afraid of it, but I would really have to consider whether I would participate in a demonstration. Because such a thing has very little success. Whether we want it or not, we still get rockets installed. Morally, of course, I'm quite devoted to disarmament, but I feel totally helpless. That is why I prefer to channel my energies into another channel, a channel that brings positive - like music, for example ... 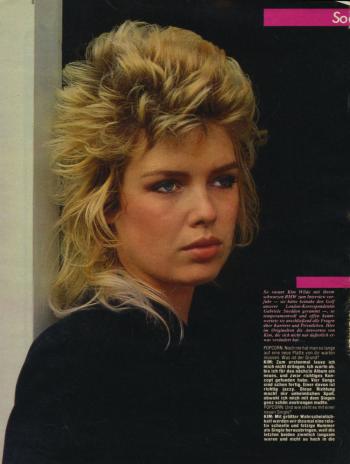 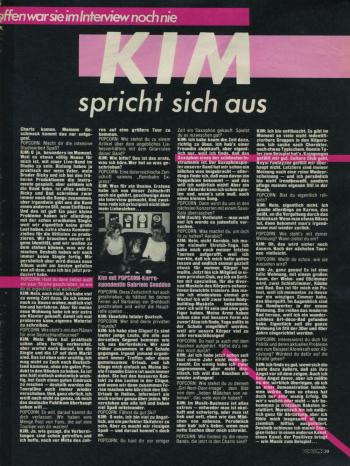