On receipt of the new album of Kim Wilde, a statement: a splendid sleeve. Splendid why since it is not a stunning originality, but doesn't it showcase its superb plastic? 10 new titles including the hit "Love blonde". In listening to this hit one could ask the question: "This new record would be the crossroads of songs as different and as surprising as the very glamorous "Love blonde"? At the first listening of the album one is fixed. Alone, her last hit detonates the rest, conceived without any doubt in an evident concern for unity.

No doubt: the Lady wanted to strike very hard by giving us a work more accomplished, more sophisticated than in her previous vinyl productions. Kim Wilde "House of Salome" one of the most successful titles of this precious disc is however very close to one of her hits from yesteryear: "View from a bridge", The sax in addition, maybe ... Still it opens the album beautiful way, not to say joyfully. "Back street Joe", and we are in the atmosphere very techno-pop leaving the synths and other sequencers the preponderant place. Enjoy listening ...

Intro sidereal and always very synthetic for what could be one of her next hits: "Stay awhile" perfect, because purified of all the artifices modes of the moment, even if that sounds 80. Such a song, We will be able to re-listen in 5 years without being able to precisely specify which fashion-mode it came from. Moreover, it is discovered that Kim Wilde sings much better when she places her voice at the service of a slow tempo.
I would return once again on his precious "Love Blonde". Maybe you will scream if I tell you that this hit did not have the impact of precedents. Yet you can not contradict me! You'll be screaming if I add that it makes sense. But yes: with this title, the one that is constantly called the "Baby doll" of Rock 'n' Roll wanted to have fun, and by vinyl interposed, launch a wink and well done to everyone Those observers who judge it and chronicle it at length. She interprets the song of her public character: rhythms close to the American musical comedies, to the glory of the "glamour girl" (pardon Jack Lang!) that she incarnates. One of its best hits, even if it does not have the criteria-progress to please the rocks-critics. It only hinders the mind, it is surely one of its most rocks.
It is also the only break in the album dedicated totally to synthetic technology and the magic of sequencers.
With "Dream Sequence" we come back, precisely. Perhaps the worst song on the record. When the synth is used to excess to create a universe to sense it resemble ... the climate loses its originality. Surprise by turning the record. Kim Wilde aims squarely at the funk of inspiration "boum-boum-Disco". "Dancing in the dark" is mixed by Nile Rodgers. Here is the explanation! ... After David Bowie, the master gifted with the "chic organization" answers the call of Kim Wilde. Willingness to be fashionable? Not at all! It could be his will to make "her break" inside the American market that boils her European success. In the States, Kim Wilde is far from being a star! She is considered a too rock product, almost "new wave". But yes! ... these records, except "Kids in America" (which was filed in their chart) are in the import bins. To remedy this, Nile Rodgers' label can help Kim Wilde open the doors of the American market more easily. It should also, without too many problems, be able to make the beautiful days of our discotheques.
With "Shoot to disable" we leave the Funk and we go back in a climate very close to that of John Fox at his time (when concocting small wonders like "Underpress").
At the frontier between techno-pop and cool-wave (with a popular side), "Can you hear it", is supported by a beautiful melody and a dry guitar sound that slices nicely with the electronics without Soul of the song.
We're almost at the end of the album. The time to dream about "Sparks" and to note that "Sing it for love" seems seriously inspired by the "Moonlight shadow" of Mike Oldfield. Believe me, I do not say that to make bad language but to do the test is edifying ...! In short, having reached this critical point of the article, one may ask what can bring the possession of such a disc if such a title makes me think of another and if it tickles me more than the other in memory Of one of the most beautiful hits of our burning summer! Well I say it without shame, and without fear, listening to this last thirty is actually very pleasant. It certainly has undergone influences and ideas from elsewhere, but that does not matter: An album in the tradition of the English pop (of no say variety), less Rock than the first and especially much more worked, better finished. The voice is almost perfect and the whole should, without too much trouble, be able to listen in a year. An important detail for who wants to profit from his discotheque of a profitable miere.
On her well-done work, Kim Wilde has embarked on the promo operation which demanded of her to perform in concert. Without being asked to pray, she came to visit France, even though - according to her - her journalists often deform her remarks because they mismanage the English language.

At the Pavillon Baltard, more than 2000 people for a unique concert in Paris. There were a lot of people. A lot of people, programs in hand, T-shirt has the effigy of the star on the torso, or in the kind "fan-souvenir" the small "clic-clac" kodak to stereotype the superb.
Young audience. Very young. One is hardly accustomed to this in the rock concerts where one believes always to find the inevitable colony of the "ancients" (habitués of the muddy festivals of the beautiful seventies). A style so different that it made think of a release of Lycée: Young, wise, clean, like the star ...
Besides, have we not seen, in its passage, some copies (sometimes pathetic) of the mysterious head-dress of Kim! Some of them even tried in 100% mimicry. No comments yet!
Still, as it appeared, a beautiful scramble ensued.
"We could see if it was as beautiful as in the photo. "We" was not disappointed! The one where I thought she was going to plant itself, she has managed admirably well. Watching him on TV, one could worry about her image of rocker. On stage, I discovered it dynamic, almost surly. She wants to prove that she lives her music, the Rock 'n' Roll. She gets away without too many bobes and even with a certain elegance. The musicians played effective without ever being alone, insisting on the titles of the last album. It was only at the end of the concert that Kim offered his fans all the hits of his charts. And it's organized madness! Like what, to say that the media condition everyone is a truth of La Palisse. In a light show and a smoke firework, Kim Wilde went on the dynamic accents of "Kids in America".
She who told NUMEROS I that she does not consider herself very good on stage has already won a first bet: that of being at ease. She now has (but she is not the only one in this case), to give her concerts a true dimension of spectacle. The Rock concerts are also sick of some old-fashioned stage conventions that few groups (apart from the "Clash") have managed to deflower. Kim Wilde has moved on to other horizons, other capitals. From France who offered her her first platinum record for "Cambodia", she still does not like her cuisine ...! On the other hand, do you know that she knows Serge Gainsbourg, Jane Birkin and the due "Chagrin d'amour" in French song? If I tell you I dream of hearing him sing "ex fan of the sixties"!
Something tells me that Gainsbourg could, and rightly so, make it Brigitte Bardot du Rock!
Like that, from the observer in search of images comparative to Rock-critics, everyone would be served, and I would be even more so to have the idea first ... 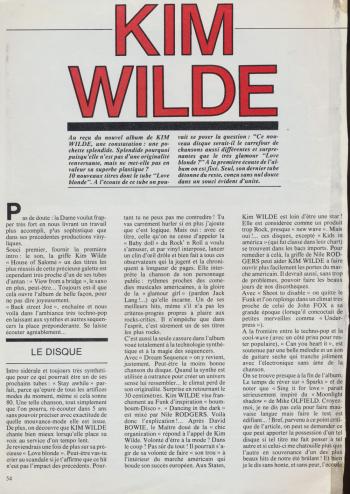 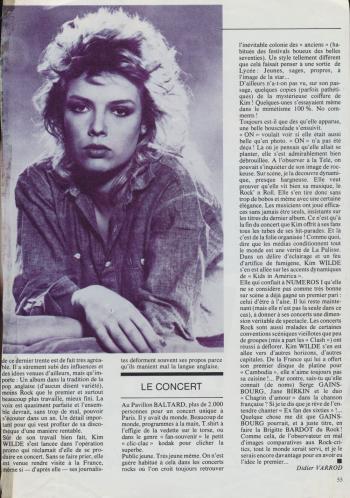