When the sky is white on London and when the frog of the Albert local Simon ground in his ice-tray as well heat is overpowering, what does Kim the pulpy one do? She also falls the perfecto and climbing them moulding to slip on a sexy leather dress and promote her new 45 T Killer, "Love blonde" is of an overflowing sensuality, rolls of the hips, and exploits a seam that hitherto Kim and her management would not have for nothing in the world sufficiently judged rock 'n' roll: the Marilyn seam. Here is a paperboard in power, that Kim sprinkles while stripping itself. A German magazine headlines: Kim presents her new single half naked!

Her white BMW was stolen one night in London, it was atrocious. At last a few holidays at the end of her tour in Barbades and in Antogua, and returned bronzed from there. Was registered with a club of gymnastics, practises perhaps even some aerobics there. Has almost recorded her third album with her family, whcih will come out in fall. Currently setting up a great European tour. Has taken part as a backing vocalist for the recording of the new album of Steven Bishop.

What she would have liked to do

To spend long holidays basking in the hot sand of the ranges of the Riviera. Titling the new album "Shoot to Disable". To find her white convertible. To be able to eat much pastry without gaining weight. To give less interviews and to make less photographs. To only trott in the streets by herself without being badgered by the unconditional ones. 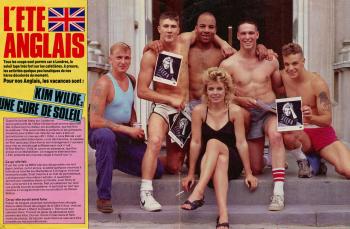