Kim Wilde: 'Being blonde and beautiful is not a shame'

Genetic engineering: Orchestral Manoeuvres in the Dark has learned it from the books, Marty Wilde put it into practice. Himself a bona fide hitmachine in the early sixties, first tried to make his son Ricky a teen star, while keeping his daughter Kim on hand just in case. It has come to this. The family corporation Wilde is thriving like never before. After hits "Kids in America", "Chequered love", "View from a bridge" and "Cambodia" it seemed to go wrong with the flop "Child come away", but the combination of routine and youth reinvented itself.
"Love blonde" is going up to the top, and we ask Kim why.

The new single is a serious step sideways. Just trying something else after the last one, that flopped?
We realise very well that after "Child come away" we need a song that could catapult us back into the charts, but the single isn't that radically different. You tend to get suspicious when someone does something totally different all of a sudden. Like what they did before wasn't good enough. I think my previous records are good.

Father-son-daughter Wilde form the musical trio at home: but what does your mother do meanwhile?
That is a fantastic human being! She keeps busy with Big M Productions, my management. We work from Knebworth, a small village some 50 km north of London. We are building a 24 track studio next to the offices, we are doing everything ourselves and independently from the record company. The fact that the whole family is involved, lowers the pressure on me. On top of that mum and dad have been active in the music business for 25 years. I get a lot of good advice from them. When she was 17, 18 years old my mother sang and danced with the Vernons Girls and they were in the 'Oh Boy!' show every week, which my father was in during the Fifties. They met eachother there. But directly after the birth of my brother and me my mum gave up her musical career and became the agent of my father. A fantastic woman! She has built up a successful booking office from the ground up.

How do you look back on the famous years of your dad?
I was very little then and didn't realise how famous he was. Only nu I start to get that. For me he was always just dad, who happened to be involved in music.

What is the role of your dad in your songs now?
My brother and my father work together on my songs and my father writes the biggest part of the lyrics. But in the studio we work as a trio: everyone brings their ideas into it, although Ricky mostly makes the decisions.

Isn't it strange to sing a lyric your father has written?
No, it's more a help than a problem. I think we can go on longer than any other group: guys like that will leave one another more easily. In your own family you will want to try again. And the most successful groups are the ones that keep on trying before the split up.

But isn't it strange to sing a lyric written by a man in his fourties?
No, not at all. Music is still music, whether you're fourteen or fourty. I prefer to sing lyrics written by older people anyway, because they have got so much more experience, so much more knowledge to base ideas on. When I hear lyrics written by people my age, I think they are a bit uninspired. They don't do much more than copy one another: dance, love, it's the same words that keep being repeated. There are too many imitations. Elvis Costello writes fantastic, meaningful lyrics; but what his imitators are writing is nonsense! The same thing goes for Bowie, he can't be imitated. But my father was there when rock started in England, he has seen it all up close. On top of that he's a great guy. He's very funny, has a great sense of humour - about himself and pop music as well.

The career of your dad was suddenly over after some three years. Aren't you afraid of that yourself?
My father was stopped because of the Beatles, who simply wiped out all competitors. After the Beatles he had modest successes as a singer, but he scored a couple of times as a songwriter. He wrote 'Jesamine' for the Casuals, and hits for Status Quo and Lulu. About myself: I rarely think about that. I have faith in our songs. And when it comes down to it, it's all about the song, not about Kim Wilde. And there will always be a place for a good song, even for me (laughs).

For now you're only famous because of nice singing and a pretty face. When will you write your own songs?
I have written a few lyrics already, but for now they are too personal. It's really hard to have some distance in your lyris. Kate Bush manages to do that because she doesn't write lyrics based on personal experiences but what she sees on the television or reads in books, that sort of thing. But I'm more interetsed in what happens to me, how I am influenced by the things around me. I have to have more faith: the expectations about everything I do are so high. It was hard enough to get on stage within those circumstances. I think I couldn't cope with the criticism on my songs. I let it happen slowly. There's no sense in rushing, I still have time.

How was it to grow up as a teenager in full attention?
At my age everyone treads into the unknown really. You come from a cocoon that school really is, and you have to learn to cope with a new lifestyle. I have had luck, because I could work with people I trusted, which made it easy for me emotionally. They helped me through difficult moments, because you're on display constantly. You are always talking about yourself: you get very aware of yourself and that can become dangerous. In the end it's like you're talking about someone else instead of yourself.

You come from art college. What did you want to become?
I especially liked drawing and painting: I would have liked to go on doing that. I have never felt more fantastic than when I was painting outdoors. Or maybe once when I got the award for Best Singer of 1982 - that was even more unbelievable. But I miss the painting. When you're 22 you don't think about life too much: you simply start anything and see how it turns out. You think: I would have to choose a good book tonight to read, and you still go to a party with friends. In that respect I felt that painting was too introspective and too lonely. When you want to get serious with painting you become very lonely, and I love having people around.

You are now a sort of entertainer. How important are those people?
Enormously important. It's priceless, peopel that can make you laugh or cry, that stir emotions within you. Entertaining is a gift. I really hope I can give people something they have a use for. Whether you're studying philosophy or sing songs, you do the thing you do best, and hopefully others have a use for it as well. A lot of people look down on entertainment, but that is stupid, because you can't go without it. And still drawing and singing are unimportant subjects in school. They don't seem to want to get that.

A piece of your 'entertainment' is in your great looks.
(laughs) Yes. Kim Wilde the sex kitten: that's the phrase I hate the most.

But you play with that in 'Love blonde', even if there's the wink in there.
Many people won't get that. I know, but many English people wondered about that as well when I sang 'Kids in America'. And after that about 'Cambodia', and in the end it's immaterial. For two years some people have done their best to put feelings of guilt in me, about my blonde hair, about being sexy and attractive. They are the people who think my success comes from my blonde hair. I know a lot of people who are blonde who didn't sell a million records. But there will always be hypocrites who have to preach about everything. First I was a bit put off by 'Love blonde' myself, but when I did sing it, it was a great relief. I felt freed from all the dumb taboos. Voila, 'Love blonde' is an ode to all the blonde sex kittens. The song says that you don't have to worry about being blonde and beautiful, that it isn't a filthy disease or something.

How does it feel to hang above thousands of boys beds?
I look at it from a commercial point of view. For myself I want to look good, but I think posters are purely marketing. It has to spell my name right. It's not an ego trip for me to know that I hang on walls somewhere.

Would you ever refuse to sing a song written by your brother or your dad?
It's already happened a couple of times, because of the music and because of the lyrics. Usually I try to sing the song, but when it still goes wrong by the end of the day, I know enough. Usually the others agree with me then. They sometimes need a kick on the behind, from an outsider who listens to their songs critically. My father is kindof lazy, but when I get the feeling he's not losing any sweat on a song, I won't sing it. On the other hand I felt "Chequered love" was mediocre when I recorded it, and now it's one of my favourite songs. I am really proud of that one now.

Would you ever want to cover one of your father's successes?
I haven't heard more than five songs from him nd he has had fourteen hits. But he never bought his own records. I do, I keep up with everything, although I am not really neat and tidy: I stuff it all in a drawer.

And with whom would you want to sing a duet?
I love duets. With a friends I have already done a country version of "Sleepless nights" of the Everly Brothers for fun. And I used to sing with my mother. I was an enormous fan of Stephen Bishop as well, and he recently asked me to sing on his new record. I was really nervous. Maybe he will remove my voice from the song and call Chaka Khan instead. But a duet? Elvis Costello. I think our voices match well. He hasn't asked me yet, but maybe someday. Sometimes pigs can fly, I just think. 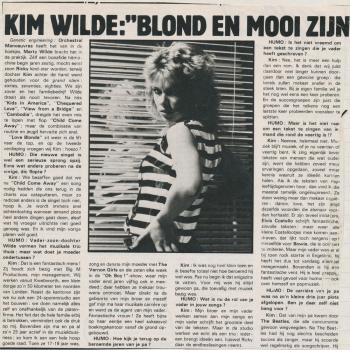 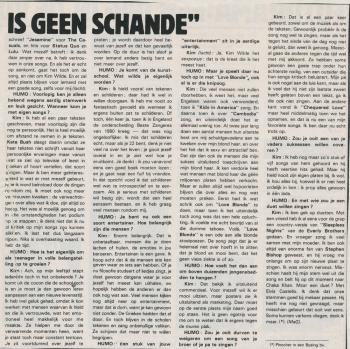