Even though Kim is very famous, she was living a sheltered life at her parents' house until recently. Since her live concerts that sweet life is over. She is suddenly out there all alone...

There she was, all alone before thousands of highly enthusiastic fans. With a very good band directed by her brother Ricky, who was playing on keyboards. That first concert was in Copenhagen, Denmark, and was kept secret from the world press. Kim wanted to try everything out. In hindsight she shouldn't have, because it was really good. But it wouldn't have been nice for the Danish audience... and for a Danish disco that suddenly saw Kim and her band come in after the concert. And Kim liked it best of all that they left her well alone. Except for one. One Danish guy walked towards Kim and asked whether she wanted to dance with him. Well, Kim wanted to. And she danced to 'Child come away', the new hit. At Kim's request the DJ also played a track by Imagination and after that Kim went to bed. The Danish boy was surrounded by all his friends. He must have had the night of his life.
Not a week later Kim presented herself before the English audience. For twenty gigs the audiences went out of their minds and the newspapers too. Kim was very happy and started full of energy on her European concerts. After the second Dutch show Muziek Expres was the only one allowed into her dressing room. It became an exciting interview.

What was it like, being on stage as Kim Wilde for the first time in your life?
A dream, it was as if I was watching and listening to myself. I wasn't standing there, it was someone else looking like me. She sang well, I felt. I was just as surprised as the thousands of people who were watching me that I could sing so well live. And when I was awakened from the dream the concert was over. The only difference with a dream is that this one really happened.

Why did you wait so long to play live?
I can tell you very complicated stories but it was simply because I didn't have enough songs to play. One album is not enough, two albums will just do. I've also rehearsed for six months with the band. A performance like that is not easy. I can't stand there and open my mouth without a sound coming out. I had to take dance lessons. It's been good, because I'm kindof shy by nature. I never know what to do with my body. When you are famous that is even worse. People will stare at you and I just don't know how to look. I'd prefer to crawl under the floor. By taking dance lessons that feeling went away. Not totally of course, but my father Marty says that being slightly shy can be charming.

Has your father said that you should move out now?
(laughs) No, that is a step I made myself. Not because I had difficulties with my parents or because I have a boyfriend, because both aren't true. I just felt it was time to stand on my own two feet. And that can happen because I have a good job now. I have bought a small flat, where I can have a bed and a piano. I don't need more. It's strange to live alone, no-one around you. But sometimes good friends come around and then it gets late.

Don't you have a lot of extra friends now you're famous?
No, I don't. I just stick to the friends I already had. With new acquaintances there's always the chance that they only like you because you are kim Wilde.

What do you do when you go out?
I never go out alone. I used to, but I can't anymore. People bother you. When I go out with others, I usually go to a discotheque outside of London or to a nice pub. And sometimes we drive through London playing loud music for fun. Or we go to a hamburger joint where the people don't expect to see you. You see them think: is it or isn't it Kim Wilde. When they ask, I honestly say that I am. And guess what, they don't believe me.

When you're on tour, who takes care of the plants at home?
My mother does, and she keeps it clean. Normally I do it myself. Or did you think I have a housekeeper? No, not in a flat like that.

Do you cook for yourself?
Yes, because I don't have a cook. But I must be honest: I'm often too lazy to cook. Then I just eat some chocolate bars. The next day I find myself so fat that I start a diet. Then I don't eat at all the next night. I don't have to cook so much then. Smart, isn't it? 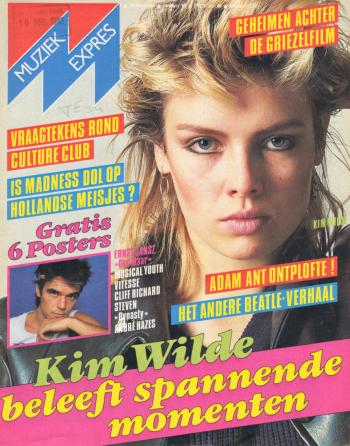 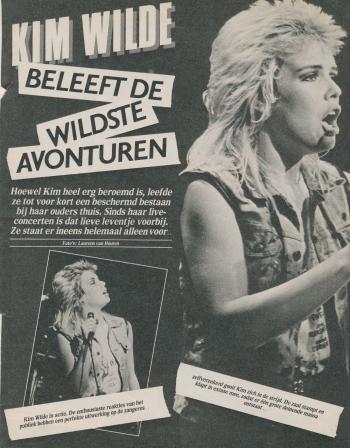 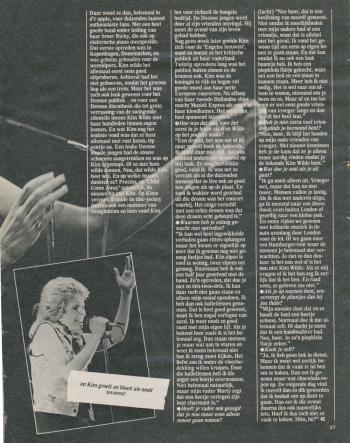