Kim Wilde: 'I don't bare all in my lyrics'

They call her the dumb blonde sex kitten of the record business, who is exploited by her father as a sex symbol. Kim Wilde does not resist this image. And her lyrics make you none the wiser, because often they are quite mysterious. It seems she concurs with her critics... Thecla Visser wanted to get to know her better and went to talk with her.

I am across from Kim Wilde in a hotel room in Utrecht. She seems like the girl next door, although she did make a name for herself in the pop world with hits like 'Kids in America' and 'View from a bridge'. Not a May fly then, but there are too many factors to substantiate Kim's success. First of all there's dad Wilde, the old rocker Marty, who had several hits himself during the Fifties. As an all round commercial man he writes the lyrics for Kim, together with Kim's brother Ricky, who creates the music. And for mum there's also a task at hand: she does all the management stuff. Kim's looks do the rest: both punkers and disco freaks like them. And she also helps the family business by singing and doing promotion.

Singing was always Kim's most passionate wish: 'I knew that I would become a singer sooner or later'. Still she chose to go to the art academy and sang backing vocals during recording sessions by her brother Ricky as an aside. Producer Micky Most happened to hear her one time and it happened: not Ricky, but Kim became the focus point of the family Wilde and since then they all work hard to let things stay that way.

But don't you miss painting?
yes, very much, because I enjoyed it. But now I simply don't have time for it.

Can you devote as much of yourself into singing as you did with painting?
Yes, I do think so. I think I can express myself well in several ways, in my clothing, in what I say, the way in which I live. I chose singing because in a way I thought it was more important than painting.

Why was that?
Well, I don't know... You know, I had a lot of books about art, but my record collection was much bigger. And the calm life you must lead as a painter... No, I need more. I often compare painting with yoga, it's about working hard and being very concentrated. While singing is very spontaneous, painting can be like that too, but singing is less contrived. I know an artist, a truly brilliant artist. And do you know why he's so brilliant? When he was my age he had an accident involving his leg. He was forced to live in a calmer manner. While other boys of his age were playing football, chasing girls and going out, her was a thome reading and painting. If something like that would happen to me, I would have to accept that. But the fact is that I'm here with a very healthy body and I want to jump around and do something with it.

It became singing and soon she was discovered by the British press: blonde, sexy, challenging lips. The men from the press didn't have to think about this for very long: it was the dumb blonde, the Brigitte Bardot of pop.

What do you think about being called that?
Oh, I don't make a fuss about that. They can say whatever they like, but I know who I am and what I want. But you know, they do it to everyone. When they would do it to me alone, I would think differently about it.

You don't fight it?
If they discover I'm not the dumb blonde, it would be nice. But why would I have to prove myself? I am like the kid in the back row of the class and never raises his finger. He knows the answers to the questions, so why would he raise his finger? Not that I have all the answers, but I try.

And the 'sexy' label?
I think most women think they're sexy to some degree and on certain moments. But for me it has a place, like many other things in my life. I know it's there, so why deny it? But it's not something that overwhelms me. Everything has its place in my life, although there is a certain sequence. I'm not that fanatic, I'm quite easy about it.

When I see you on television, you seem so cool. You never smile, for instance.
Haha, what's there to smile when you look at a camera? It doesn't smile back.

But do you have an image?
(She thinks for a long time.) I am aware that some people say to me that I do. But an image? I would prefer to call it a style, my style. An image is about something you're not, it's an escape. And I resisted that, because I would have to deny myself for the rest of my life. I'm sorry, but I wouldn't enjoy that. I have always said to myself that I would never pretend to be something I'm not, that I would not say anything I don't mean. As far as it's possible, of course, because I know I have to be diplomatic at times. But then, such is life, you can't always do and say what you want.

The music world is a very male world. You can't even walk a few steps without your father and brother being right behind you.
I get the question sometimes what I think about feminism. Maybe it sounds a bit naive what I'm saying, because I'm only 22 years old, but I think every person should find freedom within themselves. I work with a lot of men and only a few women, who are equally important. But I do make my own decisions and I won't be dictated by anyone, whether it's a man or a woman. Of course there is a difference between a relationship with a man or with a woman. But that difference is always there all around the world, so I won't get excited about that. I do think it's a shame when women don't realise the power they already have. I do realise that and that's why I don't get the feeling I have to fight for it against men. I think if you do, you have achieved nothing. I take each person as an individual and fight with one person, without regard for the sexes. I think the relationship my parents have plays a part in that. They're not like: dad handles all the business and brings home the money and mom cooks, cleans and takes care of the children. They both earn money and take important decisions.

Another ingredient of Kim's concept of success is mystery. The songs dad writes for her are not about simple themes. 'I call them song-mysteries. It's songs which you don't know exactly what they're about. A song like Cambodia, for instance. Some looked for a political meaning, but it wasn't written like that. These songs leave you behind with a lot of questions. You can interpret them in many different ways.'

Don't you want to express anything with your songs?
I don't bare all in my lyrics. Whatever I have to say I say in this interview and all the rest is about making music. By the way, I think all songs a little mysteries. Every song is a mystery for someone. When you play a record in a room with five persons and you ask them what they think of the song, you get five completely different interpretations. It's the same with paintings and words. Words have different meanings for different people. Even very clear or small words, like love. The one thinks about tenderness, someone else about eternal faithfullness and the third person thinks about sex. That's why I like singing songs, because they leave a lot to the imagination. A song is not something complete and carved in stone.

Now you only sing what others write for you. Don't you want to write yourself?
(Enthusiastically:) Yes, that is an ambition of mine. I wrote a lot at the beginning of my career, but I didn't like what I did. I missed a certain confidence. But now, when all these people around me are making music, I have a feeling that whatever they do, I can do too. And surely now that I'm moving out and living alone soon, I want to try. I need the isolation of being alone for that. But I want to start writing music, I like that better than writing lyrics. You have to be quite careful with words.

What do you mean?
(She is startled for a while, starts to stutter, looking for words.) Yeah, well, you need to be careful with words, you have to say something with very little words. And when I say something, well, it takes a long time to get to the point of what I really want to say. I need to solve that problem first.

Do words frighten you?
Yeah, yeah, they do. It's about myself and I don't have a lot of privacy to begin with. If I have to write down what I feel, it would be like giving my life's story to the Daily Paper. I mean, it does frighten me. I will found something to write about, though, even if it's something about my favourite book. And in fact musc says it all, you don't need words, just sounds. 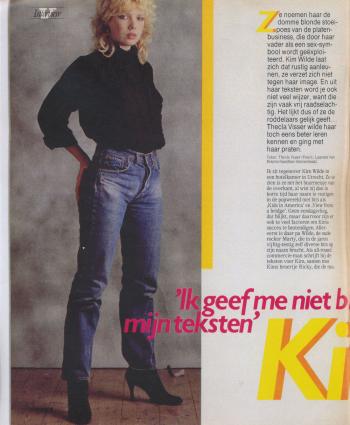 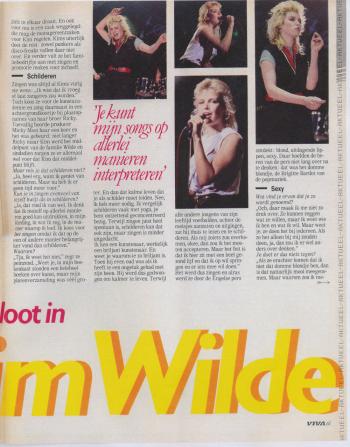 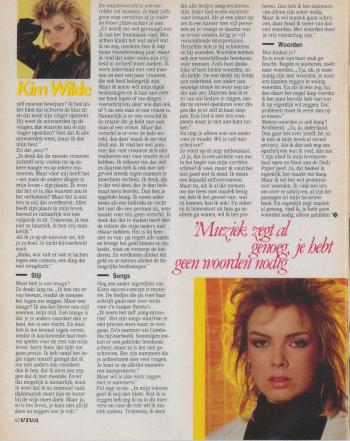