Kim Wilde: 'I don't think people like me much'

Kim Wilde is what you call a beautiful chick. But those who expect that her great looks, combined with her musical success (recently with the single Love blonde), have made her incredibly happy, are wrong. Contrary to this, she has a hard time dealing with other people.

Kim leans back. "What a warm day", she says, while she takes off her sweater. The park in London is empty in this last beautiful day in fall. We can only see someone playing golf far away from us. I sit beside her, our backs against an old tree. You know, I begin, the strange thing is that you seem very distanced. That's what you look like when you're singing.
Slightly shocked she looks at me, with something of a question in her look. Then Kim Wilde smiles. "When I'm sitting in a bar, I rarely ever have someone come to me and talk. They must really know me, or be introduced to me. But to walk up to me, just like that, no..."
Again, that look, but now in wonder. Like she wants to ask me: 'Do you know why?'. But she immediately gives the answer herself: "I think people don't like me much. That they don't really want to know me! Usually I don't have the opportunity to explain that I'm not like that... That they shouldn't believe the tabloids."

She's pulled a twig off a bush and tears leaves off it. "Yes, when someone is shy, I can imagine he wouldn't come up and talk to me just like that. But it's not that. You can look at people. If it's shyness, they become flushed and start mumbling. No, I can see that people avoid me, that they just don't like me."

I look at the sky and try to discover something in the clouds. But they've made a mess of them, today. And next to me lies Kim, a girl of 24 years... and no-one loves her anymore. 'It's not so bad', I try to tell her, but she shakes her head. "It's a real problem for me. But it's just that I can't trust people's emotions. I mistrust the feelings of others always. I don't dare to take the risk that I would trust them from stage one."

I ask her if she falls in lvoe easily. She throws away the twig, laughs, suddenly relaxed. "No, but I can fall in love when I want to. It's those moods, you know. Then you wake up and think: it's a day to be in love. And then it happens, very fast and more like a pastime. But really love someone, that rarely happens. Those times can be counted on one hand."

She's the product of the once-famous rock and roller Marty Wilde. He composed and produces her songs, like he created Kim 24 years ago with his wife, Kims mum, who is more or less her manager now. And to complete the household: Kim's brother Ricky writes her lyrics and decides the sound of her records.
"Sometimes I notice that people don't take me seriously because of that", says Kim. "Especially in the beginning they thought of me as the daughter of that singer, who had to do her thing too. I tried to avoid the subject 'family' in the beginning. People advised me to. They said: It's not good for you if you talk about your parents. And so I didn't. I tried to hide that aspect of my career. But the strange thing is: the more I tried, the less I could. After all, they are very important for me. So now I think: why deliberately stay silent about them when they mean so much to me? I think it's embarrassing that I was ashamed of that side of my career. It's not like my dad pushed me forward. He was even worried about me wanting to become a singer. Which is logical, because he knows the business, he knows what goes on in it. But he resigned himself to it. He realised that he couldn't stop me if I really wanted something."

She smiles for a moment. When I ask her if her parents still worry, and her mum doesn't just manage her, but also keep track of her dates and how late she comes home, Kim says: "Oh, I can be away for nights in a row, going out or working. But no-one has to tell me wkhat to do. I can do that myself. I don't need my mum to tell me what time I need to go to bed. Usually it's me who says that she has to go. I decide what I do - and I'm also the one who cleans up after herself. Besides that, we like eachother a lot. In some families there's fights and hatred, but with us it's nothing like that. Our blood ties make it more fun to work together."

I look at her in disbelief. But everyone has a period that they hate their parents, and want to rebel against them?
"Yes," she says, "I've had that too. I thought my parents were old people who just didn't understand. But it was like being a rebel without a cause. I would search for something I didn't like about then, just to be able to rebel against them. But they always were great about it. So this rebellion never led to anything. I could be mad about that, while thinking I really liked them deep down inside."

When she talks about decisionmaking within the Kim Wilde Family company, she sounds disarmingly naive: "I don't listen to people who want to steer in me into a certain directoion, whether it is my record company, my family or my friends. I do things the way I want to do them. That's what I've always done. It doesn't happen often that I have to say: Sorry guys, I made a huge mistake this time. Oh well, perhaps I'm just a very careful girl."

She turns to her side and pulls some grass out of the ground. When I look at her, I realise that she has yet to face her first personal and artistic crisis. Because right now she still lives in with her parents in Knebworth and sings the love songs her brother and her father write for her. But one day she will move to London for her work. It's as if she reads my mind, because she suddenly says: "You know my flat in London is almost ready? I bought it a year ago. It took some time to redecorate. It was run down, there was so much work to do. But near the end of the year I will move in. I will have a place of my own. I really look forward to it. I can finally start writing songs myself."

I start to laugh. Don't you have place at home where you can do that?
"Yes", she says, "but you can never work there without disruptions. There's always the possibility that someone calls out for coffee at home. I love all those people around me. In order to write songs, you have to have some space. I prefer to sit and talk with people than think of a song on my own. Still, it has to happen some time. I mean: I have to go to London so often, for photo sessions, for interviews, for gigs... and driving back to Knebworth on my own, that's not very appealing."

We walk out of the park. Suddenly we're in the middle of busy London again. "I read a letter from a girl in a magazine last week. She wrote: I think Kim Wilde would never have made it if she wasn't the daughter of that famous Marty Wilde. That really got to me. Because it still stings, when people write such things about me. I should have grown accustomed to it by now. Because children were jealous of me in school because I had a famous dad. I just can't deal with the fact that they never accept you for who you are, and what you do. In school I was always a very loud girl, just to be seen. I was trying to find my own identity. Just to be liked as Kim Wilde."

But that's not your name, is it? I say. She looks at me. "Well, my name is Kim Smith of course, but I've always been Marty Wilde's daughter. So it turned into Kim Wilde automatically."
"M", says Kim. And another time, stressing it a little, as if she's mad at herself, "M." As if she needs to learn the letter today. It was mentioned many times in our talk today. She told me that M writes her songs, that M once played a gold record and heard that it was someone else's record, that M... I ask who this M is. "O, that's my dad", she explains. "I mean: M. I have to call him M. Mustn't forget."
"But why?"
"He doesn't like it when I talk about my father in front of others. Or when I call him dad when we're in the studio. He asked me to call him M, and I try not to forget. But I can't get used to it. He is, after all, my dad!"
She has her sweater on again.
"M..." 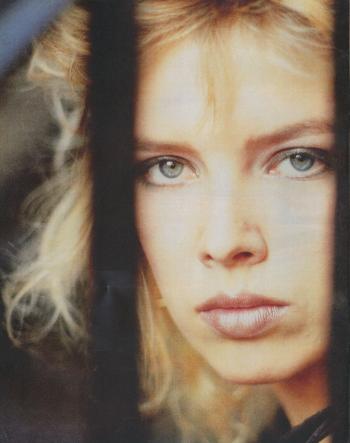 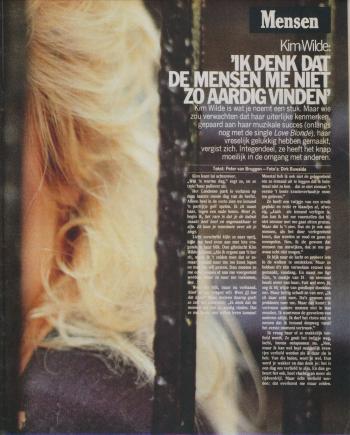 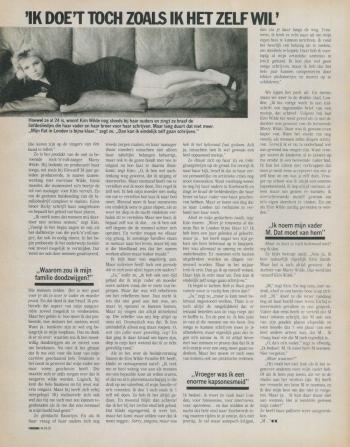