Kim Wilde is fit after a resting period: 'My health comes first'

After her first tour late last year it has been quiet around Kim Wilde for a long time. She went on holiday to the Far East and was able to taste the advantages of her success for the first time. Now she is back, full of confidence and ready to fight. Her new single 'Love blonde' has to be the first step. As before the song was written by brother Ricky and father Marty Wilde.

In need of a place of her own

'They have had a lot of work on it', says Kim, 'also because they wanted to make a record that's better than ever. There had to be a new album on the shelves this autumn. Dad and Ricky are under pressure as it is to have the same level of success and they have put themselves under even more pressure. The result was obvious, because now and then the atmosphere at home was not good.'
It doesn't mean that we have to write sensational stories about fights in the Wilde clan, but it did mean that Kim started to realise she needed to find some privacy.
'I didn't do it with full conviction, and officially I still live at home', she says, 'but I did buy a flat of my own. Right now I only use it to write songs on my own. I need the space, without brothers and sisters around me. Otherwise they keep nagging me to give them piano lessons. I feel too many eyes on me and I can't handle that too well.'

It's obvious that Kim doesn't want to talk about this subject too much. She is shy whenever her private life comes into play. She knows this and she wants to explain.
'I hate people around me who won't allow me to be myself. In my private life I fight about this, but in business that's impossible. Everyone is always busy to escape problems and a good exchange of words is almost a luxury. I have a hard time in my private life, but I think it's not my fault. Everyone seems to think that I'm away from my former surroundings and that I feel I'm better than that. But it's not like that, I don't feel better than everyone else. But still I have found out that I quite enjoy being put on a pedestal. Someone carrying your luggage or pouring a bottle of champagne, these are things that are enjoyable. I try to stay honest to myself, these things are enjoyable for anyone. It will probably become harder to stay myself. It's part of the job and I have to learn to live with it.'
Are there any other things on Kim's liver? She thinks we want to hear her out and laughs.
'If you really want to know, okay. I hate the horrible wallpaper you find in every house these days. The colours are so aggressive I sometimes literally get sick of it. I'm not even talking about the hotels. I had to live with it during my tour. But if I had my way, not a lot would have been left of it."
Animals are also a difficult subject, because Kim seems to hate them while she does feel sorry for them because of her weak heart. A word of explanation.
'Animals around the house, no, I don't like that. A dog, that smells bad and starts to lick you everywhere, I won't have it. Let it prove its dependancy in another way. We did have cats and dogs at home, but I'm glad they are gone. I don't hate animals, no. I used to love going to the zoo, but nowadays they look like prisons to me. They were built so long ago and never modernised. The poor animals look so sad behind bars in those cages.'

From animals to food, is there something Kim dislikes about that?
'I prefer fish over meat. I know some people who really changed when they stopped eating meat. They are less aggressive and have no more problems with their weight. They say they have less fear and are happier about themselves. It has convinced me to eat less meat myself. I am not a fanatic vegetarian, because I believe I can't be really fanatic about anything.'
Kim also wants to say that she has gained something from her trip to the East.
'I have become a fan of the Japanese kitchen. The first time they served that raw fish, I didn't like it. Now it has almost become a passion. I discovered a few restaurants in London that serves the same kind of food, and I go there quite often. I do like to cook myself. I like to have people over. My favourite food comes from the Mexican kitchen, bean salad, chili con carne, guacamole. I like salads. But, in my own kitchen as well as in the restaurant, I take care of eating healthily. I know I can easily gain weight if I didn't take care of my health. I go to a fitness club in London two hours a day. A healthy body makes a person healthy, I believe in that. When my resting period is over I have to work hard again. I want to be fit to be up against the pressure of everything and everyone.' 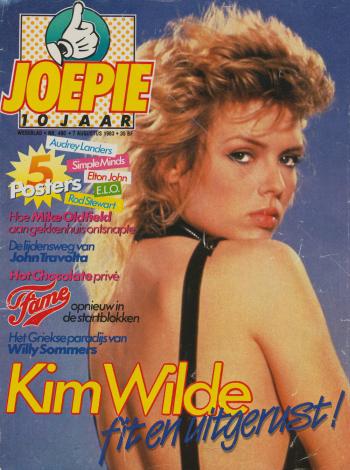 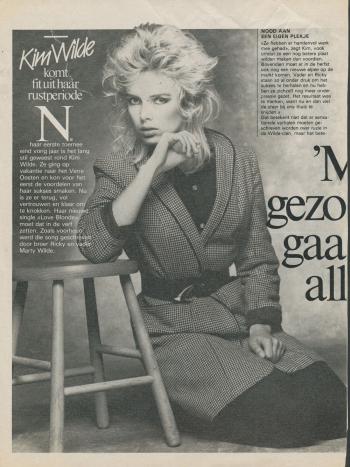 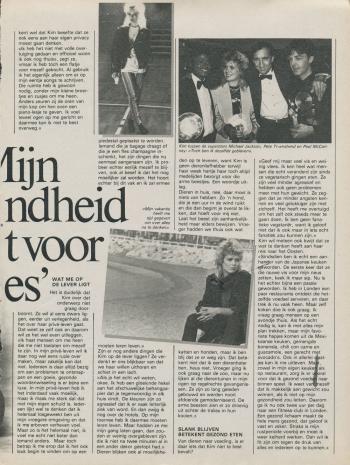