Kim Wilde has kept a low profile over the past nine months, but the release of 'Love Blond' sees her return to the charts and to the public's appreciative eyes. With the forthcoming album and the possibilities of some live dates towards the end of the year, Kim Wilde has established herself as Britain's most popular female vocalist.

I asked Kim what she has been doing since the release of 'Child come away', which only managed to reach No. 41 in the charts nine months ago. "It hardly seems like nine months to me, the times just flown by. I've had a chance to reflect on my past success and how things have progressed over the past couple of years. I've been busy keeping myself in shape by joining a gym near my flat, and workout there regularly with my friends. I find it more disciplined than jogging and it's less solitary. I mean you can talk to your friends while doing say, aerobics."

Do you find that working with your brother (Ricky) and your father (Marty Wilde) that it's easier to cope with disagreements, for instance, over the choice of songs? "Well no one likes being criticised, but if I tell Dad or Ricky my opinion on a matter they'll take it for what it is, constructive criticism. Whereas someone else might take it as a personal slant."

On your first British tour you were accompanied by a film crew making a documentary, which was recently repeated on ITV entitles 'First Time Out'. Did this add to your first night nerves? "Well I'm used to cameras being pointed at me so it didn't really make me that nervous. In retrospect I'd like some scenes taken out, ones in which I didn't look too good, but I think the film emerged as a very honest documentary."

The reviews you received for the tour were nearly all favourable, was this a big boost for you? "It was in a way, but I never really pay much attention to reviews, some performers often say they've had an unreceptive audience, I've said it a few times, but if you think about it I can't see anybody paying £5 to go to a gig and be unreceptive. I just went out and did the best that I could at the time. Obviously next time it'll be better, it's just like anything else really."

Having travelled all round the world, how do you compare British pop radio and television to continental and American stations? "Whenever I'm  abroad I always have the radio on in the hotel room or my car and I can honestly sa ythat Radio One is a luxury. I know people always have a laugh at Radio One, but it's by far the best radio station I've ever listened to. I've done lots of TV shows on the continent, but I rarely get a chance to see them. It's a case of doing a quick interview, singing a song and then off to the next country. Top Of The Pops is good for what it is, but I think there's a link missing between a purely chart show and programmes like the Tube and Switch, which I feel tend to alienate people with their clique attitude. But then again compared to other country's coverage of pop I can't really complain."

Your name rarely seems to crop up in the gossip pages, do you deliberately shy away from the hustle and bustle of the club scene? "Well my evennigs are normally spent going round to friends houses for a meal or drinks and having long serious conversations which usually get all smutty and personal. I used to go out to discos a lot when I was about sixteen, so maybe I've outgrown the need to boogie down every night. I still like dancing, but I'll just go where my friends go, like anyone else."

Duran Duran have become the band of the eighties with scenes of hystera at the airport and at their gigs reminescent of the Beatles. Do you find the aspect of fan worship unhealthy? "No I think it's an important part of growing up, there's nothing wrong with it. When I was younger my bedroom wall was covered with pictures of Gary Glitter and Elton John and I still have enormous respect for both of them. I think it's great to see Elton back in the charts."

Kim Wilde, at twenty-two, has come a long way from 'Kids in America' to 'Love Blond'  and under the guiding hand of her father and brother she's destined to go a lot further. 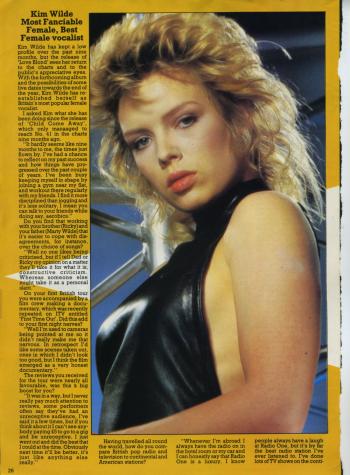 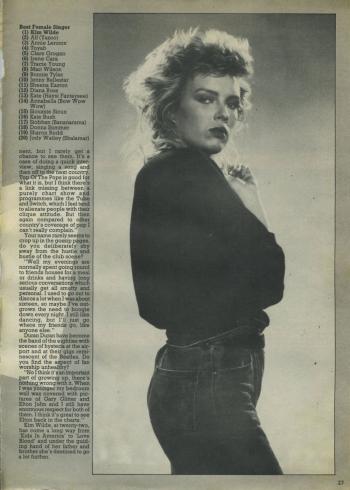