Kim Wilde: no sex, but sensuality

Now that Deborah Harry is no longer a blonde, Kim Wilde is the only "love blonde" we can look forward to. In Countdown the sensual rock pin-up promised us that she will soon visit our country for a tour. That, and the new album which will be released soon should satisfy the average pop lover.

"Love blonde" promises to be without a doubt a big aftersummer hit. The song and the performance in Countdown and other important pop television shows have a nostalgic touch. It sounds a bit like the Fifties, the era when rock and roll came up. That and the theme of the song - a blonde created for love - create the impression that the Wilde family brings an ode to rock heroes, Kim is a big Presley fan, as well as Marilyn Monroe, her favourite movie star and photomodel. And maybe the lyric is slightly autobiographical.
Kim: "I really wanted to do something in the style of the Fifties. But in a contemporary way. A bit like Queen with 'Crazy little thing called love' or 'Runaway boys' by the Stray Cats. My father who writes all the lyrics grew up in the Fifties. He has a closet full of old rock and roll records. And he was a big British rock idol himself, together with Cliff and Adam Faith. You can trust him with the job. Brother Ricky composed the song. To keep true to the original style, we dressed in clothes from that era. And we used an upright bass.

Marilyn Monroe is indeed my film idol. She was a great photomodel. I study her every pose. Not to imitate her, but to learn. Even right before she died she still looked great. I bought a book with her last photo session. When he wrote 'Love blonde' my dad probably considered all this. After reading many books about Marilyn I am not convinced she was a real 'love blonde'. She was a beautiful woman, who was manipulated by Hollywood. She did use her body to become famous, that is true. But in Hollydwood that is the only way to get to the top. I have had some clothing designed for me. It looks sexy without showing too much skin. I love the colour black. It looks better on me than bright colours. It also has something very mysterious."

The phenomenon Kim Wilde is still very much a family affair. Father and brother write the songs, dad arranges the concerts. Does Kim everything they tell her to do, or does she rebel against them every once in a while?
Kim: "I am the performer, not the marionette. I have veto rights for every lyric. When I don't like a certain line, it is out. That is not arrogant. I have to be able to relate to all the songs I sing. Dad understands this very well. Ricky has to consider the abilities and limitations of my voice when he's composing. Tours are made in agreement. Cliff once made a brutal remark about dad, who would be throwing his daughter to the wolves. Nonsense. Dad doesn't need the money. I want to be an artist. Why would I go anywhere else when I have everything I need close to home? When the songs by dad and Rick prove to be uncommercial, I will go to someone else in an instant. It's my career. But as long as it's going well they can do what they like."

Although it wasn't flawless, Kim's first tour had good reviews. The benefit of the doubt. How does she look back on the first confrontation with the general public?
Kim: "I have learned a lot. It was a new experience for me to be singing live for over an hour. At first the pressure was enormous. I was very nervous. Afraid to hit a wrong note, afraid to forget my lyrics. After a few little mistakes it went very well. The last few dates were even a lot of fun to do! I felt sad that it had to end. The nervousness is something an artist has to learn to live with. You never lose it. But the reward in the shape of applause after a good show is worth the troubles."

The dream of every artist is to conquer America. It is often a case of life and death, artistically speaking. How urgent is her need for success with Uncle Sam?
KIm: "America is prepared with care. I am not in a hurry. I think it's good to go to America when they already know your name, like the Beatles did. There is a lot of interest in British artists at the moment, so the time seems good. I would like to start with some radio interviews there. Maybe a guest performance in a TV programme. But only when I've had one or two solo hits, I can think of going on tour there. The first time will probably cost money. And that money has to be made in Europe first."

The new method to promote a record is the video. The best chance for Kim to present herself as "love blonde". Or is sex in video still taboo?
Kim: "Sex is still taboo, sensuality is not. Sex can be dangerous. It would create the impression that a woman needs her body to sell records. I am a singer. I would like to profit from the possibilities that video creates, nonetheless. The video for 'Cambodia' was well received. For the new album a few songs will be filmed as well. I do think, however, that direct contact with the audience is more exhilirating. I am already looking forward to the next tour." And so are we. 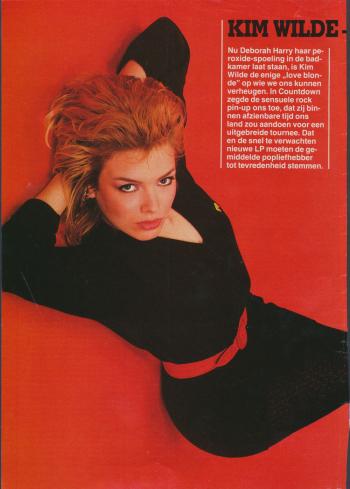 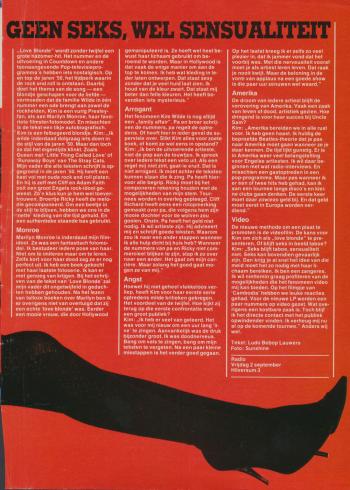