'I'm pretty excited, because I do not know anything yet in Finland. Other than of course, that I will be there ... I believe that the concert will be a great feeling! ' Now it is finally true! Kim Wilde will perform live at the Helsinki Ice Hall on December 12. Suosikki's star reporter Ilpo Musto measured the Kim Wilde fever. 'Hey, these are always nice...' Kim Wilde sits beside me and flipping through the Suosikki Anniversary Issue, which contains her image in the context of the festive lottery. Kim donated to a lucky reader sunglasses, the latest single, Love Blonde and its promotional poster. Kim is glad that she participated in the contest and send greetings to the winner.

'Maybe he will come to the concert in Finland with sunglasses on his nose!'
Kim Wilde coming to Finland is now finally a sure thing. It has been in the program several times, but always has been replaced by something else, and travel has shifted. Now it does not move, Kim is seen in Finland in November.

'I do not know yet the correct dates, as they are currently being finalized', she says after taking a comfortable position on the couch. 'But the aim is to make fairly extensive, month-long European tour, which ends in France in early December. It may be that a couple of concerts will be added then here in England.'
It's been a year while Kim was last on the road. In fact, last autumn's tour was her first and only as, this year, Kim has not performed live even once.
Kim says that her repertoire for this tour will be approximately the same as last year, although minor changes are planned.
'We throw some LP tracks out and are replaced by the latest hits. I will present them all, and all the best material. Oh, and of course the single Dancing In The Dark. Kim says that this year he has taken quite a break. From the beginning of the year she didn't appear in public,, until July, when she released the single Love Blonde.
'After last year's tour I took it easy for about a month. I spent Christmas at home and in January I took a holiday. Then we started to record again... '
Kim says that the new record has taken quite a long time, but there has been no rush. Now it is ready and the album may already be released mid-October.
'In fact, the disc was finished yesterday! The cover design is done, pictures taken and it was mixed. Ricky and my father see it as the best of what we have done, they are really proud of it. It's really a pretty strong record. Kim says that the disc contains a collection of various recordings by the trio has done in the past 18 months. The style is mostly the same as in the past, only 'Love Blonde' is a little different than the others.
'The new single Dancing in the dark' is the first song not written by Ricky and my father. It was made by two guys named Paul Gurvitz and Nicky Chinn. We thought it was pretty nice composition, we changed the words a bit and made our own arrangement.'
Now, with the album ready and the tour almost planned, Kim has relaxed a little and it shows in her face. Eyes radiate brightly and her mouth is twisted into a smile almost all the time. I have met Kim on several occasions, but I have never seen her so attractive. She is wearing black, ornamental panties. It is now trying to keep to the point where sitting next to a very sexy pussy!
Discussion moves to Kim's new home. She has been busy moving to there for some time and now it's finally happening.
'It's been for me so far, a kind of intermediate stop in the city and the parents' home range, which is about 50 km from London. Almost all of the TV performances are recorded in London and that is why it is good that I have all my clothes and makeup here. I also go out fairly often in London and then I can stay here.'
'I love to live in peaceful countryside, it must be propitiated by the nerves. I like the greenness, the trees and the smell of grass ... I guess I'm basically a country girl!'
Kim's new apartment is located in St John's Wood, which is relatively peaceful and leafy residential area. He then bought an old house with spacious accommodation, which has been gradually restored.
The move occurs in a few weeks, just before the tour departure. I'll be happy to receive an invitation and I wish Kim good trip to Finland.
When I leave the couch, grab a keychain, which I think is mine, and puts it in my pocket. When I try to open the car door I realise my mistake and take the keys back. Kim comes to me from the stairs and I apologize for the incident. I say that maybe in my subconscious I'm issuing her keys to me ...
'You dirty old devil', Kim burst into laughter and winks. 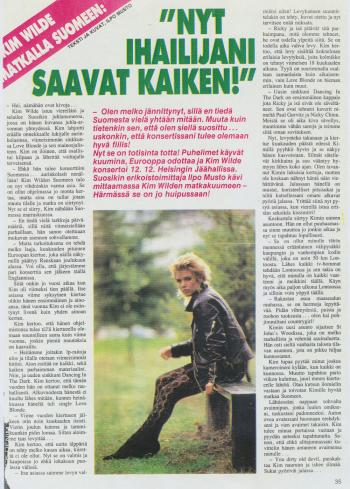