Kim Wilde was born on November 18th, 1960 in London as Kim Smith. Her father Reginald Smith was wellknown to the general public as Marty Wilde. In the period between 1958 until 1962 he scored numerous hits in England with titles such as "Endless sleep", "Donna", "A teenager in love", "Sea of love" and "Bad boy", the latter of which even made the American charts. When Beatlemania floods the world, father Wilde is left behind. From then on he start writing songs for other artists, and with his wife Joyce starts taking care of his children Ricky and Kim. Ricky is to tread in the footsteps of his father. When he turns ten years old, Marty tries to make him a child star, but this fails. Still Ricky is possessed by music, and he starts composing songs as well. Father Wilde doesn't relent. When Ricky is 18, an appointment is made with producer and talent coach Mickie Most, the man behind Suzy Quatro, Lulu, Hot Chocolate and many others. During the recording session that is organised, Most is impressed by a blonde girl singing backing vocals. When he asks Marty and Ricky who this girl in, they laugh and reply that it's Ricky's younger sister Kim. Most wants to work with her. And so, Kim Wilde's career had started....

The perfect planning for a successful career

Both father and brother Wilde had discovered that in showbusiness nothing had to be left to chance. Kim's career was almost scientifically planned. Her first single, "Kids in America", was first released in the Benelux before it was available in England (Note: this is untrue. "Kids" charted in the UK well before it did anywhere in Europe. - MR) Mickie Most felt that the taste in the low countries was a good indication for success. If it would score there, it would be a hit for sure in England as well. For the first album, dad Marty, brother Ricky and Mickie Most wrote dozens of songs, while as many were thrown away. The best wasn't good enough for Kim, and they felt it was better to wait for really good material instead of releasing an album too hastily. It worked: both "Kids in America" and "Chequered love" became enormous hits, and the first album went gold. Since then, everything went well for Kim. "Cambodia", "View from a bridge" and "Love blonde" are just a few titles of the many hits on her name, and the second album, "Select", went a well as its predecessor. No doubt that it will be another success for the third one, "Catch as catch can".

The road to the stage

To prove that she wasn't just another pretty girl, who was told what to do by her producer and her family, Kim Wilde turned to playing live in the autumn of '82. But this was also done with lots of preparation. Instead of letting Kim go out to the critical British audiences, the Wildes and Most decided to debut her in Denmark. If she could win over the cool Danes, they reasoned, then the audience in London with no problem. And this trick worked. Kim played for sold out halls and won over all of Europe, not forgetting of course Belgium and the Netherlands, because that's where they appreciated her talent as one of the first.

Kim Wilde has an image that appeals to boys as well as girls. In the boys' case it's obvious. Her innocent face a la Bardot or Monroe and her tight clothing are perfect for rushing up their blood pressure. But also for girls she embodies an ideal. She isn't too extravagant and she looks like any young woman would like to be. She never acts like an inapproachabl;e star, but she talks about problems everyone has to deal with: her choice of clothes, her hairdo, her weight, her chocolate addiction and her diet. Any fan can tell you that she loves fish and vegetables, and that she prefers tight skirts to trousers at the moment.

Most rock stars complain about not having any private life. The cameras are always pointed at them, their dealings are being followed by fans, who expect that their idols are always there for them. Kim Wilde has always separated her private life from her public one. It was only known to a few people until recently that her boyfriend was Gary Barnacle, who worked on Limahl's first single and who has his own group, Leisure Process. Kim doesn't want to move in with him. She has her own house where she rests after long studio session, tiring tours and receptions that come with the life of a star. 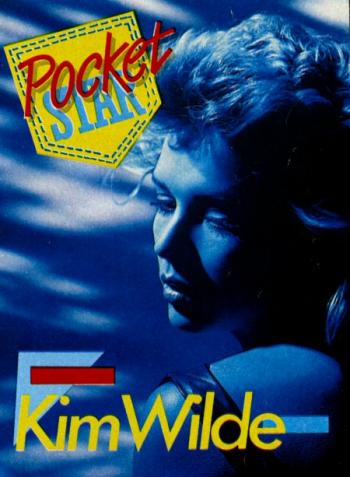 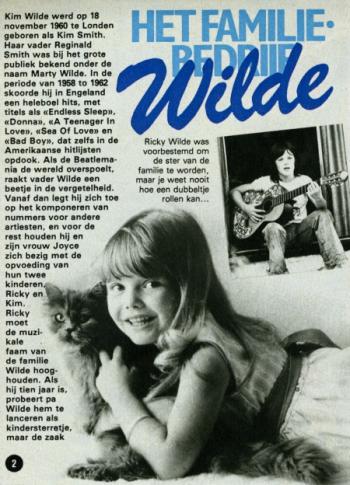 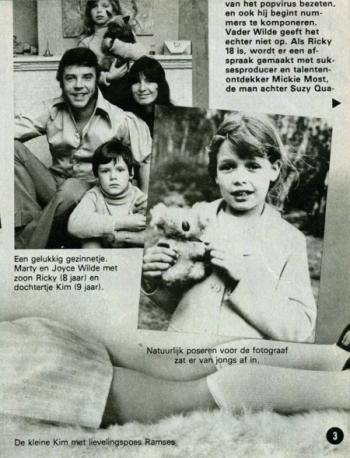 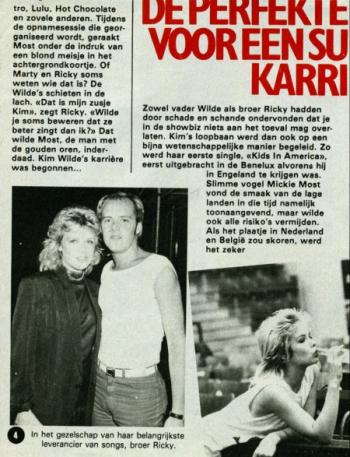 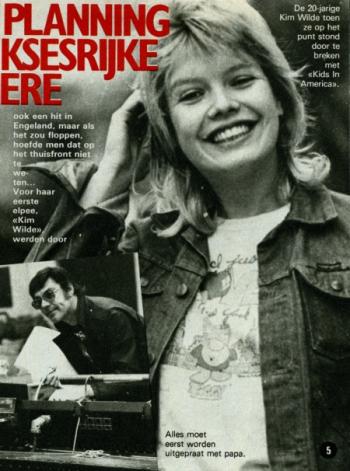 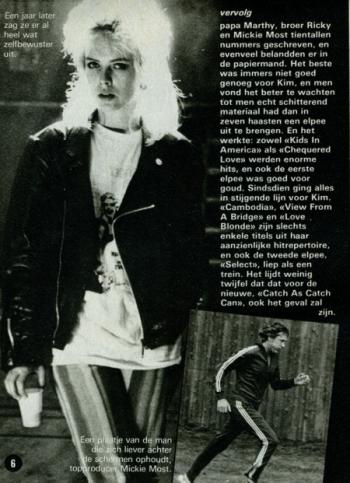 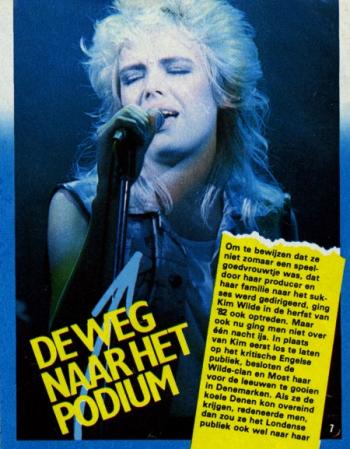 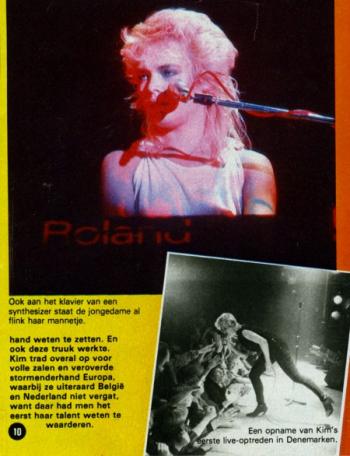 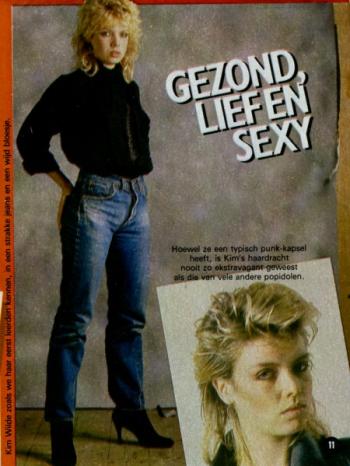 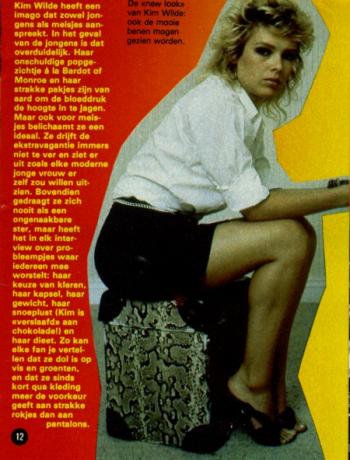 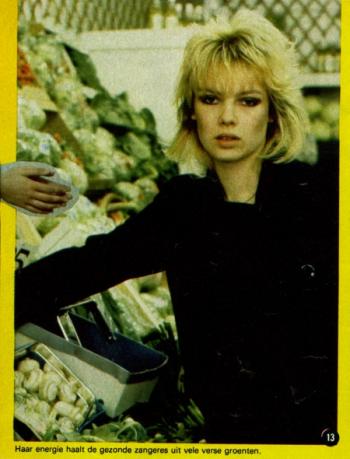 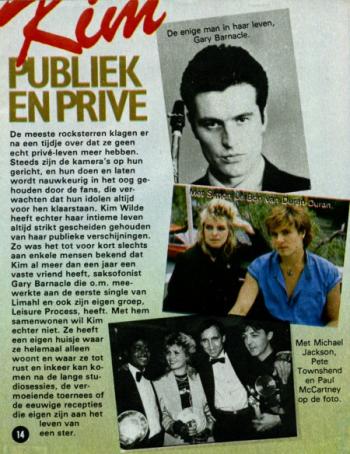 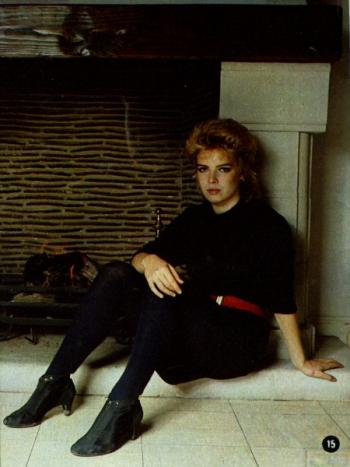 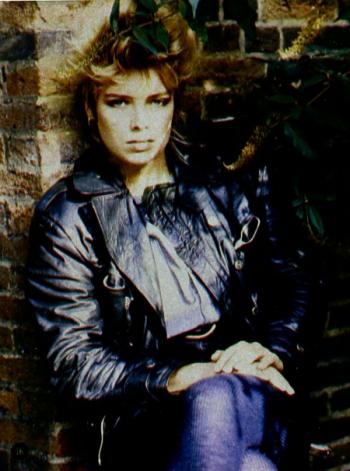