Kim returns. Sexy and everything. With a new album full of good intentions in her pockets, and a vague plan for a touring project. Between several layers of lipstick and a photo session, the adorable blonde responded to questions of Maxime Chavanne.

Kim, what have you come to do in Paris?
Well, I came to shoot a TV 'Champs Elysées', with Michael Drucker. I rehearse with the group tonight and tomorrow we turn. After I'm gone. This afternoon, I have gone to the Trocadero, various magazines have photographed me, and then voila! (Sighs). Ah yes, then ... yuck I ate last night in an Italian restaurant. I do not know if it was the pizza or the wine, but then... It must be Paris, ultimately. Every year I go very well and as soon as I set foot in this sacred city, I begin to feel ill at one time or another.

I must say that it is less funny to be here than with the U.S. Marines, you remember those pictures we made in London this summer?
You ask if I remember! Well, I've met them the other day. They played on the small bridge over the canal, along the park. So I called the other side: "Hey guys you have received the magazines with the family picture?" They got one of these blushes over there. They gestured at me, meaning "Stop this crap, the boss is here, don't talk about that here". And I understand nothing, "Hey guys, you received or not???" Shame.

What did you do since that famous meeting?
Well, we put the finishing touches to the album, it was mixed, I sang. Then there was the promo for "Love Blonde", TV's in England, stuff like that. Nothing very exciting, you know. And also "Battle of the bands" a kind of tournament between groups for which I was part of the jury. There was a good Spanish group. There was also the Nits, I think they are from Holland.

Tell us a bit about your album. This is still a hot topic ...
Well ... it comes out in October.

Kézaco?
Ha ha ha ha ha! This is a sentence you never heard that? Me the first time I heard it, it was in a song.

What song?
A song, "Caroline says", it's called.

Lou Reed?
That's it. Lou Reed 'Berlin'. At the time, I do not really understand what that meant. I did not understand but I felt. It sounded good, even very good. It echoed in my head, and I thought it would make a good title. Then I asked many people what it evoked, what it could mean for them. No one has told me the same thing as the other. It's so ambiguous. It's like the songs from the album: all are open to interpretation. This is the only link with the title songs. Otherwise, it's mostly a matter of tone.

Okay, but there is one thing, an immediate significance.
Uh ... Uh ... in fact, it is an attitude that I take ... Very arrogant indeed. This is something that concerns me, I did not understand myself, and perhaps I will never understand. But how Lou Reed sings, it can not be that ...

You like Lou Reed?
Hmmmmmhm .... This is one of my favorite musicians I love his singing. He has a wonderful voice. The problem is that everyone loves him in England. Him or Jim Morrison, The Doors. There are many 'clones' of Lou Reed, David Bowie or Jim Morrison. This is completely stupid! Anyway!

You say that your songs are ambiguous?
Yes, and how! Dad becomes increasingly strange while getting older!

Love songs?
Yes, there is one in particular that I class in my mind as one of the ten best love songs I've ever heard, it's called 'Stay a while', and it really is fantastic. I think this is the best album.

What else?
Well, 'Love blonde' is on the album. And then another 'House of Salome' (laughs). Salome is a biblical figure, a seductress, a tease, a nasty woman, and ...

All this is as sensual as it 'Love blonde'?
I think so. The sound is very clean, I think this is it: clean. Sharp, but really peppy. Very dynamic.

It seems that you are going to the cinema. You'll play with Barry Sheene.
Please he ...??

With that, anyway?
Uh, our saxophonist, Gary. Gary Barnacle.

And it was wrong?
Yes, completely false. I will not marry at all. Anyway, they had a great photo, there is not a fuss!

So, no proposal for the big screen?
No, even after all this has been printed in the newspapers, they have not contacted me. I got some stuff for scripts, the groupie type who falls for a rock star, but nothing too exciting. Film, it takes time if I decide to spend six months of my life working on a project, it must project worthwhile. It must be class, and that is a good director.

You could maybe even write it yourself?
Well... obviously, I could always try... But it would take me a long time. And anyway, I think I speak better with the words of others. It can put a lot without too spread personal things.

You seen any good movies lately?
Some, yes. "On the beach" like. I went out in tears (she laughs).

You like to leave the cinema in tears?
Oh no, not specially (she breaks out into laughter). Actually, I had not planned it! I saw another the other day. It's about a baseball player, but I do not remember the movie title or the name of this type. One of the greatest in 40 years: he won all the awards, but he died of cancer. It is very sad. I saw "The Shining" with Jack Nicholson also.

And Hollywood?
Uh... I like Humphrey Bogart, he makes me laugh. A very dry sense of humor.

Marilyn?
Yeeeeaaah! And "Bilko", you know? A thing of the 50s, U.S.. We see it in English TV: it's almost as popular as Dallas!
(End abruptly. Kim is needed for yet another posing session, and fled while the tape is still running, leaving behind her a cloud of delicious perfume. To be continued, perhaps, the next issue.) 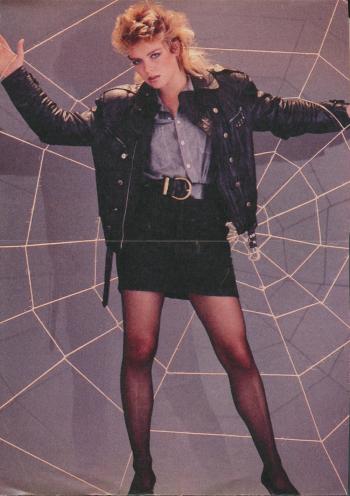 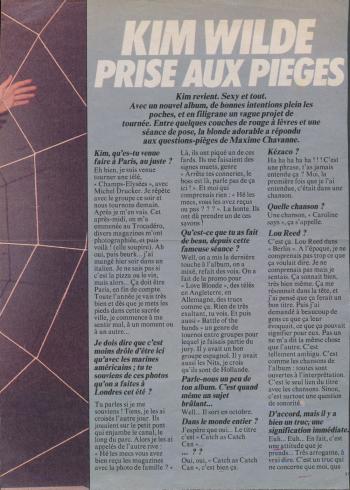 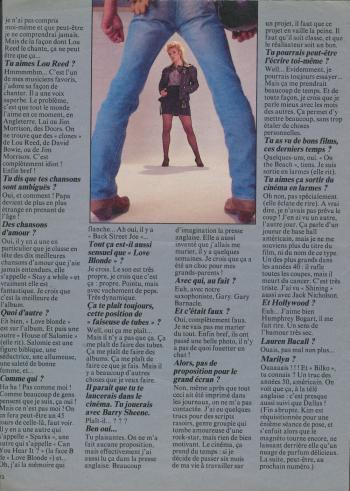 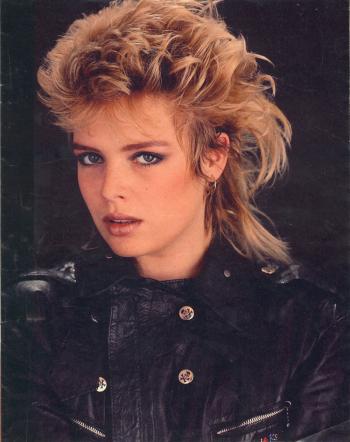