Kim Wilde: the blonde one loves

I remember that music was my first center of interest and certainly my first love!' Kim Wilde tells us, the superb English singer who is to get world recognition with her latest hit 'Love blonde'.

A family of musicians

Kim was born November 18, 1960 (under the sign of Scorpio). Blonde with huge blue eyes, she is the image of the beautiful English baby. In fact, Kim was raised in a musical environment since his father was a rocker Marty Wilde well known in the country of the Beatles... and his early rock songs were chanted on a furious rock and roll rhythm!
She is the eldest of a family of four children: two brothers, Ricky (born 61), Marty (born 81) and a sister, Roxanne (born 80), all crazy about music. When the little Kim reached the age of seven, her parents moved and enrolled her in a school which she will always have wonderful memories of. There she discovered the piano and took lessons several times a week. It's funny, but at the time, Kim was much more attracted to the arts, drawing and painting in particular... as the song... it shows up after school by enrolling in courses for Fine Arts.

But blood is thicker than water, and the musical atmosphere of the family still takes precedence over her favorite school! After a year, Kim left the college of St. Albans and started as a backing singer on recordings by his brother Ricky. And this is where one day the miracle occurs: Micky Most, magician and studio boss of Rak records, hearing her voice, falls in love and decides to take the pretty blonde under his protective wing. Thus was born 'Kids in America', her first single. The song co-written by her brother and her rocker father is a marvel. Within months, she is number 1 in many countries! In France, all her songs are 'gold discs', but 'Cambodia' downright upsets the world of showbiz, and she wins the supreme award, a platinum record!

The Brigitte Bardot of Rock

Many magazines consider Kim as the singer with the most exciting physique. Some British journalists have also called her the Brigitte Bardot of Rock! She has received numerous scripts for movies. Many movie directors would love to write Kim Wilde's name in huge letters at the top of their posters. What is true is that she is so pretty that you might think that her look is created by make-up artists, hairdressers and stylists. But that notion is totally false! Kim remained the simplest and most natural person. She does hair and make-up herself. As for her clothes, she loves digging in second-hand clothes and Oxfam shops, to find stuff that fits. When traveling, she has toured extensively around the world, she buys 'funny clothes' in small fashion shops, but she never sets foot in great fashion!

She can be a star and have a horror of all that is snobbish. Kim loves people, those who are true, sincere. This is why the family comes first. She has left the parental home for a few months. For practical reasons, she chose an apartment in North London. For her, it's much easier to live there because of the proximity to the recording studios where she spends much of her time. She chose everything herself, from carpet to wallpaper, refusing once again, to use interior designers. Her natural good taste, and the year at the Fine Arts college, helped her make a real jewel of this apartment. The creator of 'Love Blonde', her latest smash hit, will be able to live in it quietly and prepare her Suky Yaki (Japanese dish) she prepares herself.

As for privacy, then we approach a taboo subject! Kim currently spends most of her days at work. Forced to travel the world, while being surrounded by the warmth of her family, she decided to wait before embarking on married life. Marriage and children, we will see later, when her career is no longer her number one goal. 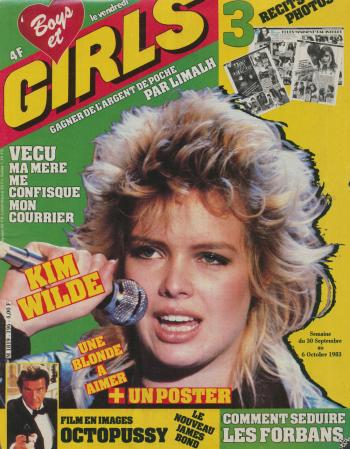 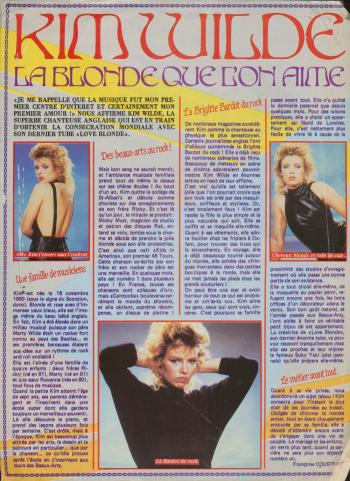