"I have accepted that I am described as sexy", says Kim Wilde in London just before the start of her second tour. The singer who was chosen best female singer by the British music industry says smiling: "It's mostly the media who have portrayed me like that. I am aware of it of course, but it isn't on my mind on a day to day basis."

With her wild blonde manes, her luscious lips, her innocent look and her hoarse voice she appears on posters on many bedroom walls. Kim Wilde is the perfect boys dream. She underlined the image of the sexy blonde during a recent performance on Veronica's Countdown where she sang 'Love blonde' dressed in a tight black dress. What was that about, Kim?

"When my father said he wanted to write a song called 'Love Blonde', I said to him: 'I'm sorry dad but I don't think I can perform a song with such a title. But then I thought, what does it matter anyway? So I went into town and went looking for the most sexy looking dress I could find. I thought I wouldn't mind all the comments I would get. As long as I like it, there's nothing wrong with it. I want to have as much fun as possible."

So you're the sexy pussycat after all? "I just think I am in front of the camera when I'm performing 'Love blonde'. My ambitions are bigger than that. I would like to work with Elvis Costello and Elton John in the future."

But for now the 23 year old Kim Wilde has other things on her mind, such as her tour on the European continent. This tour, which ends just before Christmas, is a good release of energy for her. "It will show that I am more than a blonde who happens to sing. I like to perform in front of people and it's a compliment when they come to watch you on stage, doing your thing. It's great to be on stage. We also love to play the songs from 'Catch as catch can' live."

The tour started last Friday in the Belgian Mechelen. Kim: "We chose Belgium because we are so popular there. To show that we're very grateful for that, we start there."

Kim thinks back to her first tour, which started last year in September, with lots of pleasure. It gave her a lot of positive reviews. "It makes me want to perform live again and see the audience when I re-read them. I think you're not likely to start a new tour with lots of enthusiasm when you get a lot of negative reviews."

After the tour things became a little quiet. "I needed a month to regain my strength, because however much fun it was, it was also a tiring tour. After that we started recording the new album. We agreed we had to take some time out for it. We wanted to have a new hit and that was only possible with a good single - so that took time too."

While her father Marty and brother Ricky were working hard to write and compose material for 'Catch as catch can', Kim was able to relax a little. "I profited from that because there were some things that had to be done. Things I had neglected to do because of my work commitments."

Kim now lives on her own and is asked to play a role in a new series on television. "If you don't mind I won't talk about it right now. It's all stil very vague. Not on the part of the production company but rather on my part. I was approached and I think it's fun to do but it will take up a lot of time and I wonder if I can combine that with my career as a singer. I don't want to give that up."

Kim, who is dependant on her father and brother for song material has plans to start writing songs herself. "I am waiting until our own studio is ready. I can work out ideas there with no problems. I don't have that opportunity now. There's also a lot of time consumed by promoting my current album. I travel a lot to appear in front of cameras. As far as writing is concerned: I am rather lazy, so I haven't done many attempts getting something on paper yet. When I get ideas I do sit down behind the piano, but I prefer to make a drawing, rest a little, or read a book. Her favourite book is "The Divine Garbo" by Frederick Sands and Broman Suen and her biggest hero is the Dutch painter Van Gogh. "He was totally consumed by his work, even if he wasn't recognised at all. He could only continue to paint because he was supported by his brother. And the man has made such beautiful things."

Kim, who also paints herself, says, after the tape recorder has stopped and the tea cups have been refilled, that she enjoys doing interviews. "I like to talk with people about the things I do. The only times when it is a bother, is when journalists sit across from me who don't know me and talk more about my father's career than mine. (Marty Wilde was a famous teen star in England in the Sixties.)

Kim has always worked on the videos for her singles with pleasure. "They are a good way to get the song across visually. My fans get the chance to see me more often on television. You can't be in five different TV studios at once, you know."

Although she seems to want to stay seated, it's time for Kim to leave. The show isn't perfect yet. "There are still a few songs that have to be rehearsed", she says. "And since the presentation of especially the new songs is very important, we have to get cracking." 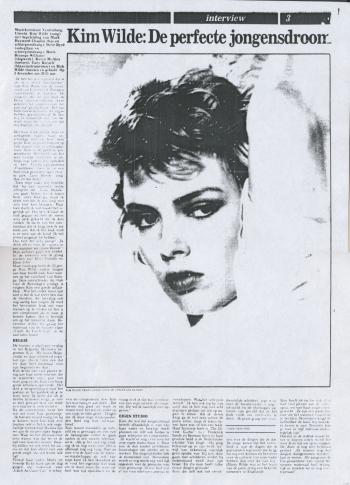