Leggy Kim Wilde whose current single Love Blonde made number 20 in the charts listens to just about anything, according to Nick Boyles, the manager of her Knebworth promotion company Big M Productions.

'She has got time for a hell of a lot of music which is why her top ten is so varied', said Nick. And the singles which Kim, who comes from Bulls Green, near Datchworth, has picked include hits which her father Marty was probably bopping to when he was a heart throb. 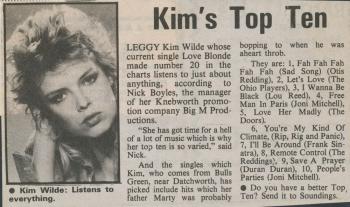