From Denim to Leather, from dumb blonde to Love Blonde - Jan Moir sees the changes in Kim Wilde.

The Kim Wilde who struts mean in a leather sliver of a dress is a different girl to the blue-jeaned bopper who took het 'kids in America' into the chart in 1981. The high stilletoes now stab the stage wit a brisk confidence, the wet-eyed smoulder glitters with something more than sex appealKim Wilde, by her own admission, is not ashamed of her success any more.

"I don't feel that I have to prove myself and I don't try to impress people like I used to", she states candidly. "Now no-one gives me that here-today-gone-tomorrow routine and I get treated with a lot more respect. People listen to what I say."

Three years churning through the star system meatrack have left their mark on this particular love blonde. Kim Wilde has fought her detractors and won, emerging a self-possessed, composed young woman who handles her career with a formidable professionalism and her critics with a cool detachment. In the early days, bad reviews would hurt, now she rarely bothers to read what is written about her. "Sometimes I can't resist and have the odd peek to see what they're saying", she admits, "but not often".

Kim Wilde's trouble started with her face... basically, she was born too pretty. When the famous bee sting pout was first sending thousands of male knees a-knock, the critics were already lining up and firing off the premier volley in a skirmish based on the blinkered premise that beauty and brains simply do not go hand in hand. She was accued of being a dumb blonde, an empty-headed piece of gloss manufactured by an industry hungry for another pretty face to fling in the ring. Worst of all, it was said that she was a puppet, a mere plaything in the hads of the mighty triumvirate of talent behind her; dad Marty, brother Ricky and pop mogul Mickie Most.

"Some people in the same position take another attitude. They don't talk to the press at all or they won't talk to certain publications. I respect that, but personally I don't discriminate. To me, its all publicity with a capital P."

"Well people can slag off your hairstyle, disagree with your politics but there's one thing they can't argue with. And that's success."

"I make things happen for myself and I'm going to make this happen for as long as possible. It's an attitude you have to have about yourself and I've had it for as long as I can remember. Even when I was still at school I knew singing was what I wanted to do, but I didn't know how to make it happen. I was quite a difficult human being to live with then. I was very frustrated, plodding through O Level maths and running up and down a bloody hockey field. It was all such rubbish. I was very moody because I was not doing what I wanted to do. Mum understood what I was going through. She knew that I wanted to sing very much and was serious about it."

In the meantime Kim consoled herself by throwing her energies into any creative outlet she could find within the school regime. She joined drama and dance workshops and shone in her art class, which she regarded as the next best thing to singing. Kim was a talented student gaining an A in her art O Level, A B in her A Level and scooped the school prize for fine arts and painting.

After school she did a foundation course at art college and very nearly went on to do a degree. "But I knew it basically amounted to another two or three years of stalling", she recalls. "I didn't pull my thumb out and eventually got turned down for the degree course."

And then... what? Nothing. Not for the first time in her life, eighteen year old Kim was at a complete loss. She could feel all the old frustrations and agonies crowding in again as she tried to join or form a band only to discover that no one was interested. "And anyway, Hertford wasn't exactly brimming with musical activity at that time", she says in wry understatement.

But like all good fairy stories, one days Kim's prince would come. He arrived in the unlikely form of her brother Ricky, who decided to turn his hand to songwriting. He wrote three songs to start off with and one of those was called 'Kids in america'. Kim Wilde's life would never be the same again. "After that it all happened quite quickly; getting the album ready and making plans for Nigel, you know..." she smiles.

The plans took her to the top in every European country as well as Australia and Japan, and resulted in worldwide record sales of over eight million to date. 'Cambodia' is still her biggest selling single notching up sales of one million in France alone. The frustrations of earlier years melted away as Kim finally embarked - and how - on her very own road to success.

"I was prepared for things of a glamorous nature to happen, but they still bowled me over", she laughs. "I think the most glamorous thing was sitting at a table with Michael Jackson and Paul McCartney at a music awards ceremony. There were chandeliers everywhere and it was just like watching the Oscars on TV! In some countries I visit I get treated exceptionally well, like I was something really special. I find it hard to take... it's very disconcerting to be treated like royalty. But I've got a sense of humour and I know that if my record wasn't in the top ten they wouldn't be treating me like that - and if you don't realise that you've got a lot of waking up to do. You have to see it for what it is. I mean, you can enjoy success but you have to realise that it is only a temporary thing."

Thoughts which must have been at the forefront of Kim's mind as each of her British released singles did progressively worse than the last, reaching a nadir with 'Child come away' in 1982 which limped in at number 42 before disappearing altogether.

"I didn't think that my career was over but I obviously did have the occasional doubts. I'm only human", grins Kim. "But they would come into my mind and I'd shove them out of the way as soon as possible."

She stormed back with 'Love Blonde', a jubilant parody of everything she had been accused of and bought THAT leather dress to gleefully send the whole thing up. The record streaked to the top and Kim Wilde's life settled back into the familiar hurly burly of interviews, PA's, television apearances and endless meetings.

"It's an exciting life full of surprises", she laughs a tthe deliberate cliche. "Sometimes it's not always things I want to do and sometimes I'm not prepared for them, but that's the price you have to pay." To combat these unexpected demands she travels everywhere with a stage outfit packed neatly in the boot of her car and a full kit of makeup and cleansers at the ready. If your face fits, flaunt it.

But her precarious lifestyle will shortly become a little more orderly when she moves into the London flat she bought over a year ago. "It's taken until now to even put some curtains up", she explains. "All I'm going to do is rejuvenate the walls and tiles and things and keep it the way it was when it was built."

And whilst Kim is doing her bit for the Preservation Society, plans are well underway at the Wilde home in Hertfordshire for the erection of a 24 track studio. The studio will be used by the Big M Production Company, the umbrella for the combined family talents and named after their father, Marty. ("He hates being called dad so we've always called him Big M.")

Now Wilde Senior and Junior will become involved in producing other bands and Kim will be able to explore the technical side of things in more detail.

"Anytime I've been in the studio before I'm prepared for singing and concentrating on that so I don't have time to say 'how are the faders, boys' or 'how are the flangers going today". She laughs at her own experience but knows that a little determination applied to the project will soon have the electronc mysteries within her grasp.

For Kim Wilde is a grafter. The girl who used to get beaten up at school because her dad was famous, the girl who wouldn't smile as a teenager because she thought her teeth were horrible, has come a long way.

The teeth are capped, the feelings of insecurity thrown overboard somewhere en route on her stormy cruise to success. Now she has just what she always wanted including boyfriend Gary Barnacle who plays sax in her band and is thus able to understand and share her triumphs and traumas, so long as he understands his place in the scheme of things.

You see these days, Kim Wilde is very much her own woman. And Gary, Marty, Ricky and Micky will all drink to that. 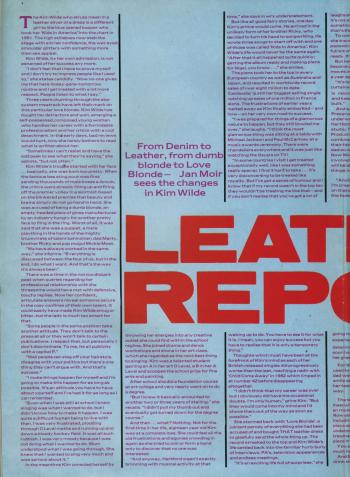 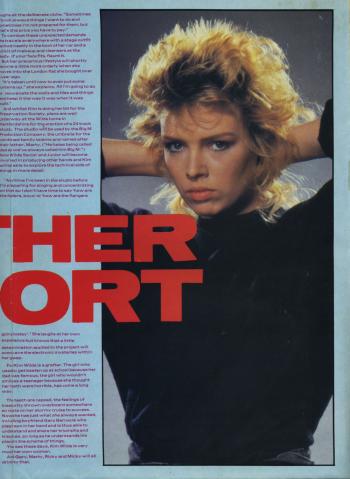