On December 3rd KIM WILDE will come to the Netherlands for a concert in the Muziekcentrum Vredenburg in Utrecht. For her many fans it's an opportunity to see their idol in real life and for you, Hitkrant readers, a chance to shake hands with Kim and to talk with her. Because that's the grand prize of this unique competition: meeting Kim Wilde!

Because Kim is in our country so short before Sinterklaas and you're all busy making poems for family and friends, we will keep this competition in style. We ask you to make an original and funny Sinterklaas-poem for Kim!

Of course, there are a few rules which you must keep an eye on. A poem must have the proper rhyme and rhythm, that is logical, but it must also be fun and appropriate for the person which it is meant for. In your poem you can write about Kims personality, looks and records, but you can also make a poem about a gift you would want to give to Kim.
Your poem doesn't necessarily have to be lengthy, as long as it's fun! Those who write the nicest poems are in the run for the grand prize. Because only one person can meet Kim Wilde, we also have 10 signed copies of Kim's newest album 'Catch as catch can'. So you might win your own present! 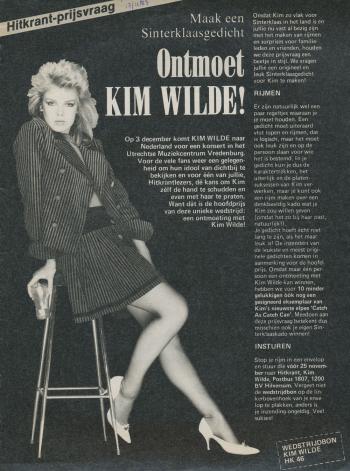