On the Wilde side

Marty Wilde and his daughter Kim talk to Robin Eggar.

Marty Wilde was one of Britain's first rock 'n' roll idols. A protégé of impresario Larry Parnes, he had 13 hit records between 1958-62, including 'Endless sleep',  'Donna', 'A teenager in love', 'Sea of love' and 'Rubber ball'. In the early Sixties he moved into films, starred on stage in Bye Bye Birdie and started in cabaret. He married his wife Joyce in 1960: they have four children. Kim, 23, Ricky, 21, Roxanne 4, and Marty, 2. Since her debut hit, 'Kids in America', in 1981 (written by her brother Ricky and their father) Kim has become an international star. Her seven other hits include 'Cambodia', 'Chequered Love' and 'Love blonde'. She is single and has just left the family home near Knebworth, Hertfordshire, to live in a flat in North London. Kim's career is contolled by the family company Big M Productions, run primarily by her mother Joyce.

Kim Wilde: The first time I remember seeing Dad perform was in Crackerjack on the telly. I don't really recall his gigs until I was eight or nine and we moved to Herts, and lived as a family for the first time. Dad was always there; we were all living together and very much closer. I remember him backstage; one moment he was in rock 'n' roll, and the next he was Robin Hood in a panto; 2000 people or just 20 bothering to turn up; ordering his pint of Coke; sitting in a pool of sweat, the shirt clinging to his back; whipping it off with that horrible smell of sweat. I was very matter of fact about it. Other kids used to have difficulty relating to it: 'Your dad sings rock 'n' roll songs late at night. My dad's in bed by the time yours goes out to work.'
I envied Ricky when he went out on the road with Dad. I was still at school. Dad was so into music he couldn't help influencing us. I remember him putting on 'Bridge over troubled water' and whacking the volume up. It wasn't a lesson; it was his genuine love of good music. He wanted to share it. Mum made me do piano lessons. I started off wanting to do them and ended up terribly bored. Dad realised I was into schooling a lot, so he put a lot of emphasis on education and exams. He didn't make me stay in and revise, just played on my conscience a lot. They both had this great way of making you feel terrible guilt about doing something you shouldn't have. You wouldn't do it the next time because the feeling was too awful to bear.
Dad was really pleased when i wanted to go to art college, delighted when I did well in reports and exams. He felt that at least I had A-level art to fall back upon. When he was young Dad was into this talent competition at the Greenwich Odeon - near where he was brought up. Some old dear who was blind won, singing 'Three Coins in the Fountain'. Dad ran all the way home crying his eyes out because he hadn't won. He knows what it is to want something and not have it. It took him a while to realise it about me. He was scared for me because I'm a girl. he's got a chauvinistic streak - along with a fatherly, protective one.
I used to be really frustrated with things before I started singing. Mum got the brunt of my uneasiness. He kept right out of my way. He's very provoking, we disagree about lots of things. Mum says he's the red rag and I'm the bull. We start at opposite ends of the field and fight all the way to the middle, and Mum usually plays the peacemaker. We always end up agreeing - it's just the way we get there. He's a real perfectionist, with awfully high standards about everything - food, clothes, the state of the world. He instilled high moral standards when he brought us up. He was no paragon of virtue. he'd swear; but if I did, he didn't like it. He'd smoke in the morning. He did all the things he didn't want me to do - which didn't make for a perfect upbringing. He was lazy when he didn't want us to be lazy; thoughtless when he didn't wants us to be thoughtless; insensitive when he wanted us to be sensitive.
Kids generally react to what parents are. All the bad things you don't do, the good you work towards. Somehow he bestowed the importance of honour and honesty on me. I respect him, faults and all.
When I was a kid he used to pin me down on the floor. He has rather large feet - size 13 or 14. They've always been a cause for hilarity in the family. People with large feet have large socks which tend not to smell too pleasant .Which is putting it mildly. He'd pin us to the floor and threaten us with The Sweaty Sock Treatment. Then he'd get the sock and dangle it in front of our noses. I could never imagine my friends' fathers doing that.
He always makes up little ditties about people we know. The words are set to well known tunes: rhymes for the dogs, a couple for the kids. It's confusing for visitors sometimes when Dad walks around the house singing this little ode to one of the dogs. But when he doesn't want to be infectious, you can't find him anywhere.
I didn't become aware until after the euphoria of his fame had died down. I was never under the impression that he was a superstar, as I never experienced it first-hand. I know he had 13 hits but I can't comprehend it. My mum doesn't like being introduced as Marty Wilde's wife. You can see the shutters go down. I did that too when i was growing up. Maybe he gets that now: "You're Kim Wilde's father".
He's one of the funniest people I know. I'd love to have his sense of humour. As long as he keeps laughing he'll keep out of the loony bin.

Marty Wilde: I had no intention of Kim being in showbiz at all. I used to see these battered, brown suitcases around the clubs, open with a couple of bras, a grubby slip and a cheap make-up bag. There was something terribly sad about seeing some girl trying to conjure up emotion for people who didn't care. I guided Ricky into music; that was quite cold and calculating - I always felt he had great potential. He joined my band when he was 15.
I was a bit unsure about Kim. She was at art school and I felt she was drifting and didn't know what she wanted. We'dmade a couple of demos with her that showed great promise, but I never thought any more about it.
At 14 she was taken down to 'Opportunity Knocks'. She cut a couple of tracks but wouldn't go on, and insisted on being taken home. She hated the whole manufactured element. It was alien to her.
As a child she was very temperamental. I've still got the evidence on Super 8 film which I've transferred to video. She was a very beautiful, very happy little girl. That lasted right through to her early teens. Then she wasn't very sure of herself and was very unhappy. I had a different mental outlook at the time, but things have changed in our family in the past eight years. My wife started to read feminist books. It changed both her and Kim. They both started to think as individuals, not as subservient man-pleasers. They both rebelled, started to reason with me and say no. Kim is a very strong person, probably the strongest in the family. She's got a very fiery temper and won't tolerate fools.
I once heard Kim threatened on the phone by another girl. Over a boy. The other girl was quite a tough frightening character. I heard Kim give her such a roasting I was staggered. If the girl had been in the kitchen, Kim wld have thrown her through the window. She asserted her authority and won what she wanted.
Ever since they were children I'd swear like a trooper. That comes through with Kim. When she loses her temper words surely fly. Once, in company, she shocked me with a stream of words. I gave her a "cool it" look, and suddenly realised it was me talking.
She only respects people who deserve respect. Introduce her to the new Messiah of Pop and she'll just say "How do you do". Then she'll check him out three years later. She's very honest, and that honesty can be very painful.
I was very concerned when she went on an EST self-awareness course. You have to be strong to go through that. I was scared that it posed a threat - when the Moonies come to the door, they pose a threat. It's not losing the money. It's losing the mind. I was panicking, but she made little of it, saying: "It's just a course".
She went with her mother. I wouldn't let her into a lion's cage without one of us standing by the trainer. I love her too much for that. I don't know why I worry so much: she has her own in-built radar and a great way of separating fact from fiction.
I always felt she was indulging in a fantasy until her record company boos, Micky Most, said that she had an inspired face. I looked across the table and I just saw Kim, my Kim. That's all I could think of. She was just my daughter. My shy, introverted daughter. The first time she was on Top of the Pops she wrecked me. It was like seeing a daughter in a different light. I just said "Game, set and match". She hit me like a ton of bricks.
I look at her and see things that aren't in me. Recently at a record company convention she did a very late show. She was extremely tired, but spent the whole time being naturally polite to the reps. If I'd been that tired it would have shown.
She could be as big as any female star has ever been. But she hasn't got the conceit some stars have. She's naive about the power she has. She doesn't look in a mirror and see a beautiful creature. She sees a person. 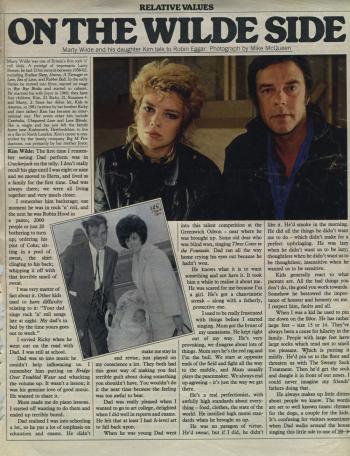 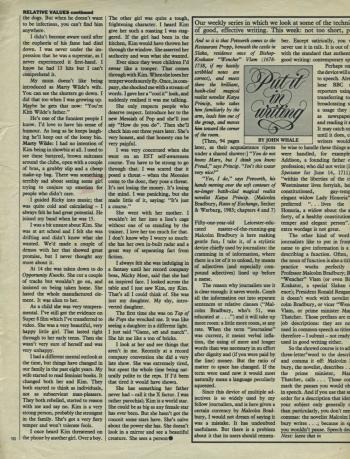