On tour with Kim

Tour station Utrecht (Holland), 21.05. Kim with blonde manes, in black stockings, bullet belt, black t-shirt with 'Elvis' print jumps on the stage. From the 10.000 Watt boxes "Chequered love" thunders into the hall.
From then on it goes on and on. Kim's secret : the setlist of her hits is written on a piece of A4 paper, which she has glued to the floor before her.
Nothing should go wrong during her first European tour. Every concert is planned in detail, such as where the spotlights are hung, the number of visitors for the concerts, and even the fire plan is written down. The technique and instruments alone are worth two million Marks.
Two trucks, much like rolling hotels, drive the 30 man group from city to city, because a night in a hotel between two gigs would take up too much time.
For the tour of three weeks, which ends quite uncommonly in the Finnish city of Oulu (just below the polar circle) before 5700 people, Kim has hired a married couple of cooks, which makes the much-loved English Pies. Kim herself prefers hot Indonesian food and like to drink cool white wines.
While her roadies reside in a luxuriously decorated bus, Kim and her band reside in a twelve meter long red bus, worth around 600,000 Marks. The back of the bus is the "sleeping room", with 15 cages, that are decorated with curtains. Every cage has its own stereo installation.
In the middle of the bus in the kitchen, consisting of a fridge, washing machine, dryer and toilet. There is also a sitting room with a video installation. 32 movies are available to see.
No wonder that everything goes well with such perfect planning. The fans in Utrecht, who have come from as far as 80 kilometre, are so excited that Kim can't leave the stage without giving three encores after the last song 'Kids in America'. 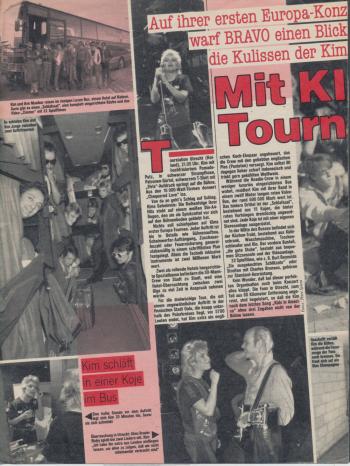 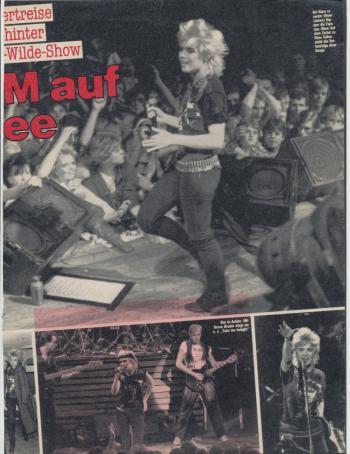