In a world exclusive, Popcorn shows you photographs on this page, that come from Kim Wilde's personal archive. The English top singer has made these photographs herself, but also developed them - in her own dark room, which she has made in her new home in London. The photographs on this page are snapshots taken during Kim's first tour and clearly show Kim's talent as a photographer. Pictures include a selfportrait in a mirror ("because of my hair I have focused on the cosmetic products instead") and a picture of Swedish fans ("they waited for two days outside my hotel in Aabenraa"). "I always take my two cameras with me and during my career I have made more than 3000 photographs already", explains Kim, and she adds: "I can't say that I'd rather photograph than sing - but if my singing career should be over, I can always start as a photographer. Just like Gina Lollbrigida did, after her film career."
Right now, Kim is working on her next album. The production has experienced a delay of two months so far, which is why the planned tour of Germany had to be postponed. Kim promised Popcorn: "I will come to Germany as soon as possible!" 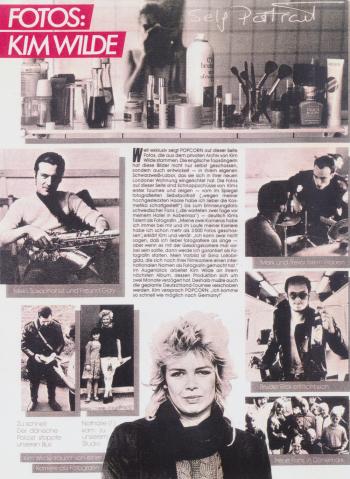