Return of the love blonde

Two years ago she was every teenage boy's No. 1 heartthrob. Then one flop single and - boom! she disappeared out of our lives. Now Kim Wilde's back - older, wiser and ready to tell Paul Simper the whole story.

When there's your own flesh and blood involved there's always another chance. The voice of the speaker is strong and determined - but the face is a ghost from the past.
Remember Kim Wilde? Well the phoenix has just risen from her ashes. It was just two years ago that Kim first stepped into the limelight to out-blonde Blondie with songs like 'Chequered love', 'Water on glass' and 'Kids in America'. For a while Kim was Britain's top female singer.
Then... nothing. Silence!
'Child come away', her last single, disappeared last October - and Kim with it. But Kim comes from a family well versed in the art of survival. Her father, '50s pop star Marty Wilde, made an art form out of comebacks. Together with Kim's mother Joyce, also once a singer, and her 19-year brother Ricky, who helps write and produce his sister's songs with Marty, he have her the determination to come back.
"There's just something about that family bond that makes you try again", say Kim. "My mum, for instance, is a very strong woman. She runs Big M Productions which is the mainstay of our management. She really manages all of us.
"When you've got people like that behind you you're always ready to give it one more go."

So now Kim's all ready to bounce back with a new single after almost a year away from pop business scrutiny. She has spent that year well. Reflecting on her early successes and failures and getting down to work on a new album.
"After my second album "Select", we put out 'Child come away' as an interim single and it didn't do anything", she observes. "I think that made us realise that there's no point putting out something if you're not 100 percent behind it."
Kim smiles. "Obviously there's been times since then when I've been a little bit concerned. But groups like Altered Images and The Police have shown that you can come back in your own time - when you've got the right song."

In this case it's 'Love Blonde'. A song which for the first time proves that Kim is in control of her image - and aware of people's dumb-dumb expectations.
"'Love Blonde' is a real tongue-in-cheek 'up yours' to all the poeple who take the piss out of blondes. There's that dizzy sexual stereotype of blondes with no brains and this is just really taking the rise out of those people who think that - and the blondes who believe it."
It's a refreshing move. All the glamour, all the make-up - that almost unreal touch of platinum - is still there in the photographs. Yet you get the feeling that the real Wilde is starting to take a little bit more of a hold on the way her body is run. One of the first steps in this direction has been to keep a closer eye on the artwork for her records.
"I hated the last sleeve for 'Select' because it was boring and a bit tacky. The actual shot was alright, but not the way it was presented. Now I've taken over complete control of how I'm presented. So what you see from now on, whether you like it or not, is me.
"It can be a bit of a pain having to take time to talk over the layout of a sleeve with a designer. But if you think about it, when I'm 50 that album's still going to be part of my collection - so it might as well look good."
The 'look' of Kim Wilde is an interesting contradiction. A sultry sex symbol - that's the impression you'll probably have of Kim Wilde if you've just seen her staring out at you a couple of shelves below the Cosmopolitan.
But in fact Kim is a down-to-earth girl with her head well screwed on. She grew up in the country, in Hertfordshire. For a while she was a Guide and a Brownie. Then she became a bit of a rebel, went out to discos and generally had a whale of a time.
Bright, but no genius, Kim spent her teens at Presdales - an all girl secondary school. "I had my moments at school", she remembers, "but I was really incredibly average academically. I wasn't bad at sports. I was quite a strong and sturdy lass really, and so I was good at things like the javelin and the shot put. My main interest at school though was always music. I even tried to get a few groups going then, but while I was really dedicated and determined all the other girls just saw it as a bit of a laugh."
Through this period of growing interest in 'the family trade', neither Kim's mum or dad went overboard trying to enlist one more on the bandwagon. Kim did get the chance to sing with Marty though.
"When I was about 16 me and mum used to sing on stage with dad when he was working up north in pubs and bingo halls. We did everywhere from seaside holiday camps to seedy working men's clubs to the Palladium.
"I think that actually helped a lot when I started my solo career. By that time I was used to all the ups and downs. I knew it wasn't to be taken seriously, whether you were being wined and dined with champagne and caviar or stuffing down a pork pie and a can of coke with the best of them."

Thanks to this level-headed attitude, Kim has also managed to keep in touch with most of her old friends from schooldays. "I think all my friends at home were quite pleasantly surprised by my success.", she says. "It's not something that really bothers them. They're all getting on quite happily with their lives, whether they're at art college (as Kim once was) or occupational therapists or grocers or lawyers.
"They've all been really marvellous, my friends. Really good mates."
Kim Wilde's a confident and likeable girl. She's charming without being gushing and amusing without coming over either cynical or contrived. Perhaps most importantly of all though she now appears willing to take a few more chances.
Take the forthcoming album. "I think it'll be called 'Shoot to disable' which is the name of one of the tracks. "It's a very strong song and title. It could be called something startlingly original like 'Kim Wilde II' but I won't let that happen."
It seems quite a while now since Kim Wilde first blazed her way onto our TV screens with the raunchy teen pop of 'Kids in America'.
She's risen to the top... and found her self back down at the bottom of the class. Stronger and older, perhaps this time the Love Blonde's here to stay. 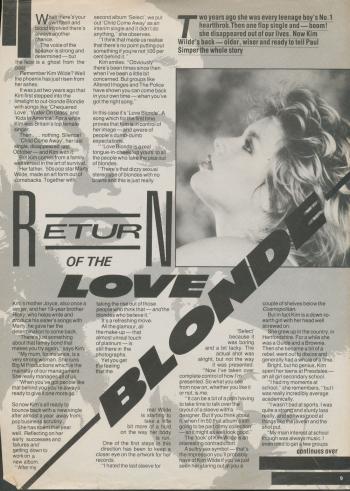 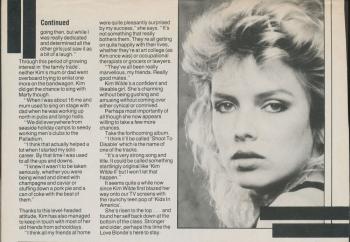