Ever since Kim swapped her black jeans against ultra short miniskirts she pays even more attention to her weight than before. On top of that Kim and her band are preparing a big European tour and the Love blonde is adamant that she wants to have a good figure when she climbs on stage. Kim shared her diet secrets with us...

'Despite the fact that I regularly eat a piece of chocolate, I have lost a lot of weight', says Kim proudly, 'and my condition has improved as well. The majority of the performances of my tour last year was done on sheer willpower. When it was all over, I felt worn out to the point of being ill. That won't happen to me again.'
When Kim stopped smoking last year, she gained weight just like any other person. She immediately joined a London jogging club and follows three sessions of an hour per week. 'We do 20 minutes of aerobics. After a short break we proceed to do stretch exercises. I think that I look better than last year. It would have been unthinkable to wear miniskirts back then.'
Kim's diet is not complicated: a lot of fresh vegetables, fruit and dairy products. Even Kim's chocolate addition didn't have to be forbidden. 'I do break the bars in pieces and keep them in the fridge', she explains, 'and take care that I don't snack too much between meals'. Before she goes to sleep Kim does nothing to damage her figure as well. 'That is hard', she says, 'because when you're up working so late like I am you usually get a bit peckish. For a light meal I usually go to a Japanese eating house or a fish restaurant.'

The bread Kim used to eat for lunch has been banned. 'Unless you take whole wheat bread', Kim reacts. 'You're better off leaving sugar out of your tea or coffee and drink lots of water. A glass of wine is allowed every now and then.'
Kim Wilde's diet provides some 1200 calories a day. For breakfast she usually chooses one whole weat toast with butter and an apple, a carton of yoghurt and some grapes and a portion of muesli or a softly boiled egg and an orange. For lunch and dinner there are more possibilities. A few ideas: a sea fruit salad with cooked cod, shrimps, lemon juice, yoghurt, salad and cucumber, two sausages with mushrooms, a tomato, some bacon or liver of lamb with a slice of onion, a carrot, a tomato, some cauliflower and two small potatoes.
If you're really someone who takes candy a lot, then try to eat as much fruit as possible. One chocolate bar a day is not a disaster. Do it like Kim: stick to your daily calories, don't eat too much and not too late, have enough exercise and snack wisely! 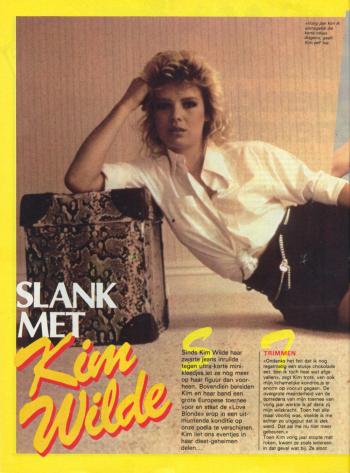 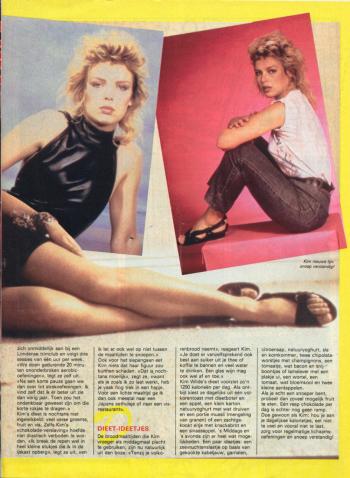